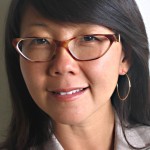 Christine Ahn is founder and international coordinator of Women Cross DMZ, a global movement of women mobilizing to end the Korean War, reunite families, and ensure women’s leadership in peacebuilding. In 2015, she led 30 international women peacemakers across the De-Militarized Zone (DMZ) from North Korea to South Korea. They walked with 10,000 Korean women on both sides of the DMZ and held women’s peace symposia in Pyongyang and Seoul where they discussed how to end the war.

Ahn’s op-eds have appeared in The New York Times, The San Francisco Chronicle, CNN, Fortune, The Hill, and The Nation. She is a regular columnist at the Institute for Policy Studies’ Foreign Policy In Focus.

Christine has addressed the United Nations, U.S. Congress, and ROK National Human Rights Commission, and she has organized peace and humanitarian aid delegations to both North and South Korea. She has delivered keynote addresses at major universities including Harvard University, Stanford University, University of California at Berkeley, Pomona College, Wellesley College, and the University of Toronto.

She has worked with leading human rights and social justice organizations, including The Global Fund for Women, the Oakland Institute, The Institute for Food and Development Policy, the Women of Color Resource Center, National Committee for Responsive Philanthropy, and the Nautilus Institute for Security and Sustainable Development. She co-produced Fashion Resistance to Militarism, a popular education show on the dominance of militarism in our lives. Christine has a Master’s degree from Georgetown University and a certificate in ecological horticulture from the University of California, Santa Cruz. She was inducted into the OMB Watch Public Interest Hall of Fame and recognized for her peace activism by the Agape and the Wallace Alexander Gerbode Foundations.

This Year’s Forest Fire Season Could Be Even Deadlier

Countries are using the coronavirus crisis to lift environmental regulations, even as COVID-19 leaves populations more vulnerable to health impacts from fires.

How COVID-19 Could Impact the Climate Crisis

Far-right governments are rolling back environmental regulations, while international climate talks stall amid the crisis. But climate activists see opportunity.

Iranians Are Not Our Enemies

When foreign policy as we know it isn’t working, creative citizen diplomacy can step in to humanize the real people who would be most impacted by war.

While the Two Koreas Talk, Trump Is Throwing Shade

Korea's new pro-engagement president may not have to be as deferential to Washington hardliners as his predecessors.

If Trump wants to make an early mark with North Korea, it should be with the only thing that's ever worked: diplomacy.

War Is Not An Option for Korea

Attacking North Korea now would undermine the very reason U.S. troops have been stationed on the peninsula for seven decades: to protect the South Korean people.

As the Trump administration tries to do damage control in Asia, Korean women are leading a movement to re-define their country's relationship with Washington.

As the Olympic games in Rio draw to a close, another set of games will begin: military exercises between the United States and South Korea to prepare for a possible armed conflict with North Korea.

A Year Ago, I Crossed the DMZ in Korea. Here’s Why.

Until women get a place in the peace process, we'll take our calls for an end to the Korean War to public streets all over the globe — and even across the DMZ.
Page 1 of 612345...»Last »