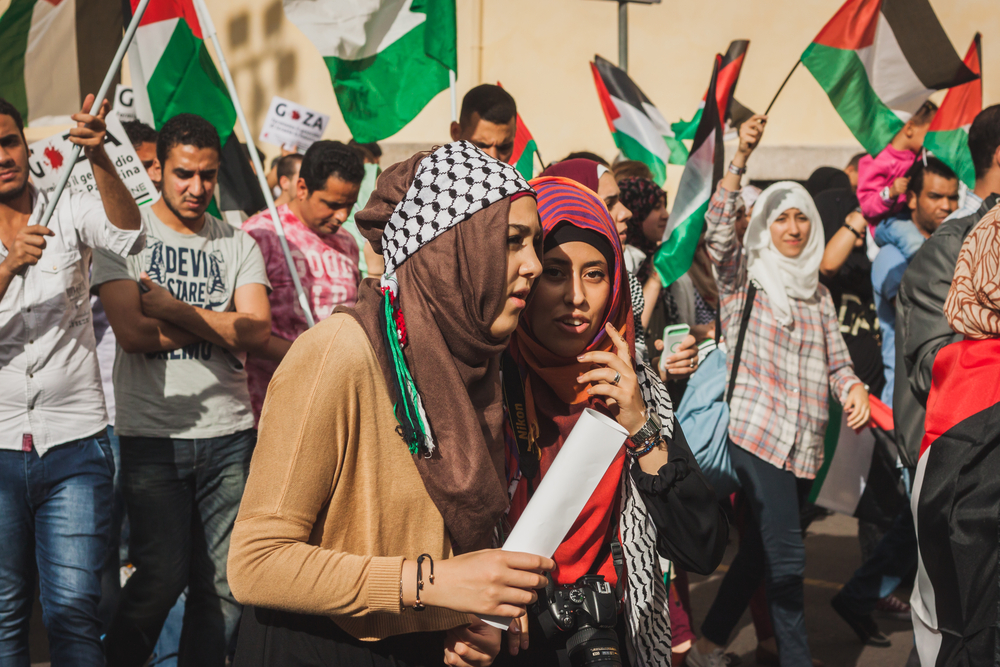 “Where is the Palestinian Martin Luther King?”

This question — when asked — is never sincere. It is based on a cynical distortion of both Dr. King himself and the struggle of the Palestinian people. The former is painted as a domesticated, friendly preacher who sat down with political leaders and peacefully dismantled the tyranny of Jim Crow – in contrast to the wild, fanatical, and violent mobs of Gaza City, Nablus, or Hebron.

Both of these images are false. And now, as the mainstream American press inks pages of tributes to Dr. King’s legacy 50 years after his assassination, they refuse to see its continued power in the solemn, steadfast, and courageous Palestinian Great Return March, which has been met with the kind of lethal force that would make Dallas County Sheriff Jim Clark proud.

When I visited Dr. King’s former home in Montgomery, Alabama, earlier this year, I was asked: “Who owned the segregated Montgomery bus company?”

After responding with a shrug, I was correctly told: “Northerners.”

One of Dr. King’s most persistent themes was that racism was an American, not just a Southern problem. We were all complicit, either in our silence, or — as King learned when met with bricks and stones in Chicago — our own ugly prejudices, which periodically bubbled up from our polite exteriors.

The same was true of the war in Vietnam. “If America’s soul becomes totally poisoned”, King’s voice boomed through New York’s Riverside Church in 1967, “part of the autopsy must read Vietnam.”

Today, many of us are saying that it reads “Palestine.”

Israel’s “friends” retort: Why single us out? What about Assad? What about the other Arab dictators?

But they miss the point. We don’t say that the Israeli occupation is the worst crime on earth today, and Dr. King didn’t say this about Jim Crow. We say that this crime is uniquely and obviously covered in our fingerprints. Our missiles, our money, our excuses, and our circuses at the United Nations.

The Palestinians don’t need me to tell them this. “Made in America” is an obvious enough clue, along with the suspiciously large number of American accents in the Israel Defense Forces.

Have some Palestinians responded with violence? That cannot be denied, neither can the horrific savagery of suicide bombings and the deliberate targeting of civilians. Surely this would rile Dr. King. Then again, King understood the desperation of oppressed people, and his understanding of Vietnamese desperation is worth remembering when we see Palestinian violence today:

Anyone with a basic understanding of Palestinian history knows that creative non-violence has always featured heavily: The mass demonstrations, strikes, and protests of what we call the First Intifada; the “Freedom Flotilla” that was infamously attacked by the Israeli Navy in May 2010; or the call for Boycott, Divestment, and Sanctions (BDS) against the state of Israel.

Thousands of “Palestinian Dr. Kings” have led these movements. Some were ignored by Western media; many more are dead.

Yet they have always been vilified. The stock phrases tend to be: “They weren’t really non-violent”; “Non-violence was a cover for something more sinister”; “Their actions aren’t violent, but their ideas are”; “Although they didn’t physically attack us, they created unacceptable disruption and chaos.” This latter line has been most prominent in Israeli excuses for shooting unarmed “Return Marchers” in Gaza.

This same dismissiveness was directed at Dr. King and his allies, as Ta-Nehisi Coates reminded us in the Atlantic last year.

To get an idea of our government’s priorities, consider that one day after the deadly Ku Klux Klan bombing of the 16th Street Baptist Church in Birmingham, Alabama, the director of the FBI moved to install wiretaps not on the white supremacists, but on King and the civil rights leaders. Attorney General Robert Kennedy approved the wiretap request one month later (on this, see Chapter 11 of Taylor Branch’s Pillar of Fire).

The protesters, not the murderers, were apparently the real threat.

In the same way, crimes inflicted on the Gaza Return Marchers — like the sniping of unarmed demonstrators and journalists — are vaguely described as “violent clashes” by liberal news outlets like NPR and the New York Times. Headline writers in respected foreign policy magazines are dreaming up impressive contortions of the English language, telling us that what we are really witnessing is “The Non-Violent Violence of Hamas.”

Where Will We Stand in Fifty Years?

There are two sides, we are told. Be more moderate.

But these shrill calls for moderation are old, too. They flowed consistently and mercilessly after Dr. King “declared his independence” from the war in Vietnam.

The editors of the New York Times opined that things were “less clear-cut than he suggests”; that his comments were “facile,” “wasteful,” and “self-defeating” — even “slander.” King’s real concern, they said, should have been “the intractability of slum mores and habits,” whatever that meant. The rest of the print media — including even much of the black press —  agreed.

Now, for obvious reasons, these self-proclaimed purveyors of sober and even-handed analysis look back with embarrassment.

They were wrong and King, for all his faults, was right. Right about Vietnam and right about the “Triple Evils” of poverty, racism, and militarism that still plague America.

The thousands of Palestinian Kings are right, too. We can only hope it doesn’t take 50 years for us to see it.