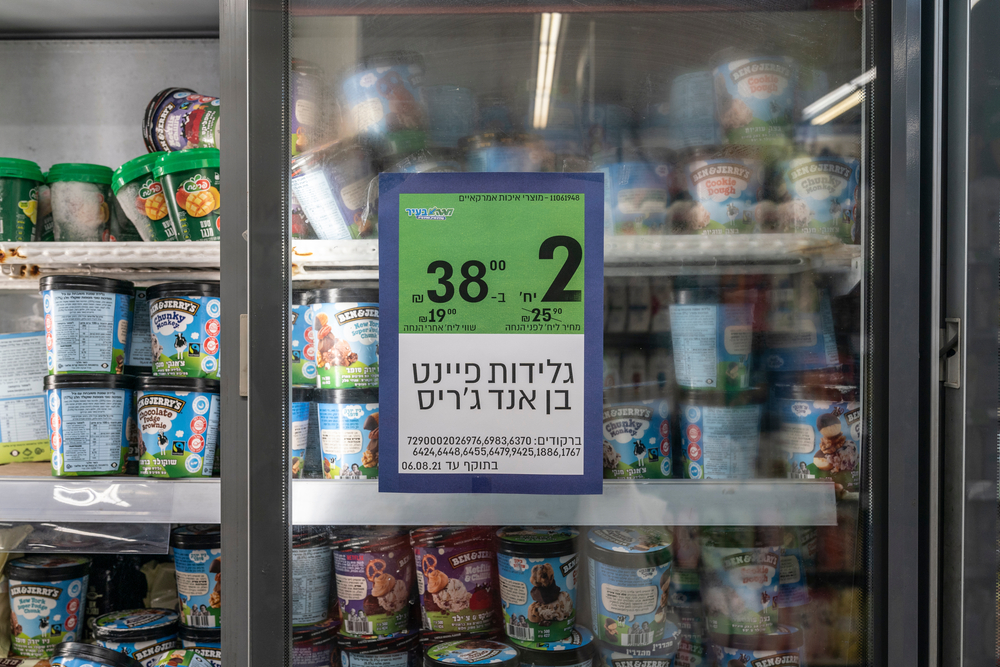 From the Boston Tea Party to the Montgomery bus boycott, an ice cream boycott for Palestinian rights fits right in with social movement history.
By Phyllis Bennis | August 4, 2021

This wasn’t about a missile strike or a cyberattack. It was about ice cream.

Ben & Jerry’s had announced it would be ending production and sale of their treats in Israeli settlements in the occupied Palestinian territories.

Israel’s response was extreme maybe, but not really surprising.

This same Israeli government defines the global civil society boycott — a nonviolent pressure campaign to stop Israel’s violations of international law and human rights — as an existential threat. Apparently, even when it’s about ice cream.

In 2006, Israel created its Ministry of Strategic Affairs to respond to the alleged threat posed by Iran’s nuclear enrichment program. (Israel, not Iran, holds the only nuclear arsenal in the Middle East, but that’s another story.) A few years later, the same ministry got a new assignment: stop the Boycott, Divestment and Sanctions movement, known as BDS.

It’s not really a nonviolent boycott of Chunky Monkey that Israel is worried about. It’s bad publicity.

Boycotts are protected by our Constitution and the Supreme Court. They’ve been used forever in this country — from the Boston Tea Party to the Montgomery bus boycott to the boycott of apartheid South Africa. Other citizen boycotts are underway today targeting Saudi Arabia, Myanmar, Turkey, China, and even the Tokyo Olympics.

The BDS campaign targets Israel over its occupation of Palestinian lands, discrimination against Palestinian citizens in Israel, and denial of Palestinian refugees’ right to return to their homes.

These human rights violations have led influential organizations — including Human Rights Watch and the Israeli human rights organization B’tselem — to determine that Israel is guilty of the crime of apartheid.

Boycotts lead to people asking embarrassing questions. What’s the deal with Israeli settlements? If Palestinians are citizens of Israel, why don’t they have the same rights as Jewish citizens? Why can’t Palestinian refugees go home? The answers aren’t actually hard to find.

About 700,000 Israelis now live in Jewish-only settlements in the Palestinian West Bank and occupied East Jerusalem. They’re all illegal under international law.

Palestinian citizens of Israel do have the right to vote. But many rights in Israel are determined not by citizenship but by “nationality.” If you’re not Jewish, Israeli law says explicitly that many rights don’t apply to you.

And despite international law and U.N. resolutions mandating the right of Palestinian refugees —  like all people — to return to their homes after a war, Israel refuses to allow dispossessed Palestinians to return home. But Jewish migrants from anywhere in the world — whether or not they have ties to Israel — are welcome to full citizenship.

Israel worries when people ask those questions. Because the answers raise more questions — about the legitimacy of Israel as a “democracy” or “our best friend in the Middle East.” Questions like: How can we be such close allies with a country whose prime minister said, “I’ve killed lots of Arabs in my life, and there is no problem with that”?

That leads to asking members of Congress why they send $3.8 billion of our tax money directly to the Israeli military every year. Shouldn’t we condition that aid on ending human rights violations — or cut it altogether?

U.S. public opinion has changed dramatically on the subject, especially among Jews and Democrats.

In a recent poll, 25 percent of Jewish voters agreed that “Israel is an apartheid state,” and 34 percent called Israel’s treatment of Palestinians racist. In another poll, 66 percent of Democrats want the United States to impose economic sanctions or take other action in response to Israeli settlements.

Ben & Jerry’s has a long history of social responsibility. Founded by progressive Jews, the company has supported the Black Lives Matter movement, environmental justice, and a wide range of other causes.

Pulling out of Israel’s illegal settlements, encouraged by a petition campaign in their home state of Vermont, is consistent with their history — and U.S. public opinion.

Who knew that ice cream could be so important?

Phyllis Bennis
Phyllis Bennis directs the New International Project at the Institute for Policy Studies. She’s the author of “Understanding the Palestinian-Israeli Conflict: A Primer.”