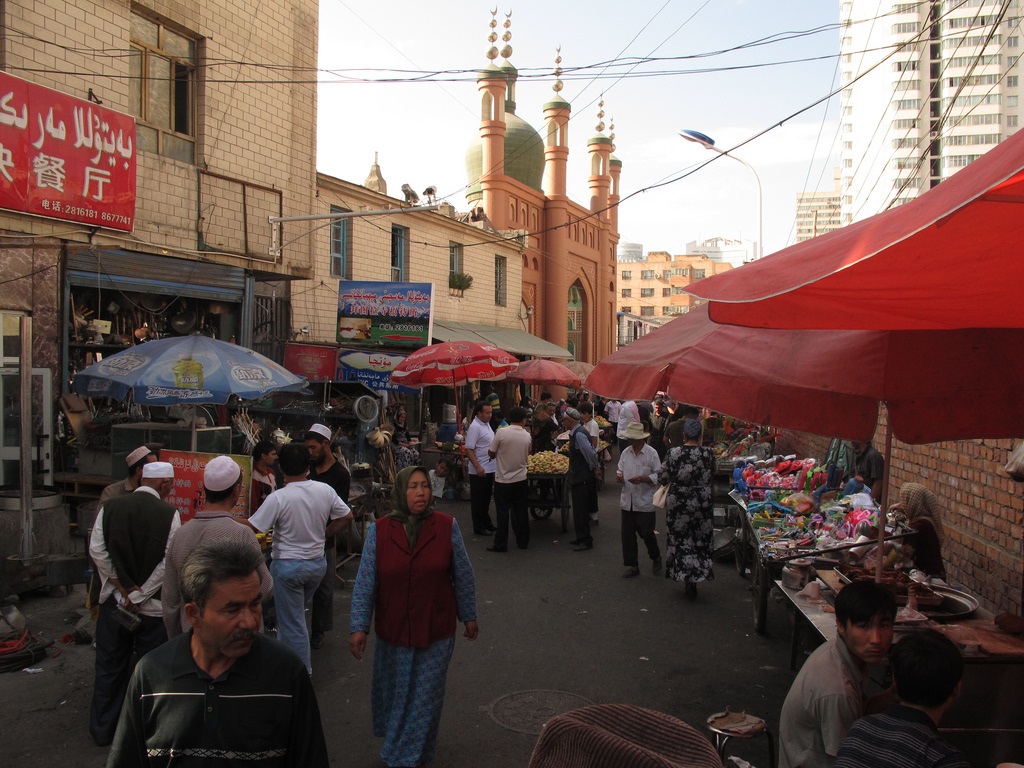 The Chinese government is experimenting with gentler approaches to pacifying restive populations in Xinjiang and Tibet. but it has far from forsaken its "iron fist" approach. (Photo: Alex Rubystone / Flickr)

China is experimenting with "soft power" approaches to its restive minority populations, but brute force remains an omnipresent threat.
By Piero Sarmiento | October 8, 2014

The Uighur scholar Ilham Tohti was recently sentenced to life imprisonment on charges of separatism.

The former economics professor, who resided in Beijing for most of his career, is internationally known for his countless articles promoting stronger interethnic dialogue between Uighurs and China’s majority Han population.  Through writing and peaceful advocacy, Tohti tried to lessen the friction between Uighurs and the Han community while advocating for Uighur rights.

Cynically, Chinese authorities treated his dedication to broader understanding among Chinese ethnic groups as a threat to the country’s territorial integrity. Tohti’s supporters consider him a peaceful yet passionate advocate for human rights. Instead he has been treated as just another Islamic extremist from Xinjiang.

In recent years, minority groups all over China have grown progressively more restive, with peaceful demonstrations increasing alongside violent terrorism. Separatists in the western regions have launched attacks against government buildings and innocent bystanders, while others have engaged in civil disobedience — included hundreds of self-immolations.

These are not arbitrary actions. Uighurs and Tibetans, among other underrepresented ethnic groups in China, have long felt oppressed by Communist Party policies. The government’s initial response has been to crack down on these “separatist forces” with an iron fist as a means to maintain social order and a semblance of unity.

Yet this response has only led to deeper resentment, prompting the government to explore alternative measures.

Although the government has not completely abandoned the “iron fist” policy, as the story of Ilham Tohti reveals, the Communist Party has devised a number of other strategies to address ethnic unrest. Many of these fall into the category of “soft power.” Nowadays the Chinese leadership is vigorously pursuing both approaches, deploying a carrot or a stick depending on the circumstances.

Tibet is populated overwhelmingly by ethnic Tibetans, while Uighurs constitute a plurality in Xinjiang. Han Chinese have increasingly settled in both regions—especially in Xinjiang, where their numbers nearly match those of the Uighurs, which has led to clashes.

Even though China’s official language is Standard Mandarin, Tibetan and Uighur are the preferred tongues, and sometimes the only spoken ones, among many natives of the western regions. Unlike the generally nonreligious Han, Uighurs and Tibetans are highly religious—the Uighurs overwhelmingly Muslim and Tibetans overwhelmingly Buddhist. Many Uighurs and Tibetans do not consider themselves actual Chinese citizens, or their homelands part of mainland China. For example, Uighurs in Xinjiang often refer to their region as East Turkestan and refuse to use any other name.

Even though minorities are exempted from certain national laws, such as the one-child policy, the Chinese government’s rigorous political oversight of their territories has created friction among the various ethnic groups. Many Muslims in Xinjiang believe that government policies pose a threat to their cultural identity and dignity. In 2014, for example, Chinese authorities restricted the observance of Ramadan. Drastic measures were taken to prohibit the use of the Quran in educational settings, discourage attendance at madrasas, and curtail customary fasting habits.

Younger generations have been the most vulnerable to these sanctions, since they find themselves obliged by their teachers and superiors to ignore their Islamic traditions. The government in Beijing is not only targeting children and average Uighur citizens, but also the local authorities. Xinjiang officials themselves have been reprimanded for openly expressing their religious beliefs.

The people holding the highest positions of power in China tend to come from the dominant Han ethnic group. Smaller communities have been perennially marginalized and overshadowed. Lately, this underlying animosity has escalated, resulting in outbursts of violence—not only in Tibet and Xinjiang, but all over the nation.

One of the most recent tragic events took place in the province neighboring Tibet known as Yunnan. Last March, knife-wielding assailants assaulted crowds in the Kunming train station, resulting in 29 deaths and over 140 injuries in a bloodbath the Chinese government blamed on Uighur separatists. Another dramatic attack followed two months later in Xinjiang’s capital, Urumqi, when attackers crashed cars and threw explosives at a crowded marketplace, killing 31.

An earlier incident occurred in October 2013, when a car crashed in Beijing’s Tiananmen Square and burst into flames in a suspected suicide attack. Five people were killed, including three in the car, and dozens were injured. Last August, the Chinese government executed eight Uighurs it accused of fomenting terrorism, including one allegedly linked to the Tiananmen attack.

The situation in Tibet—where there have been few reports of violent resistance since the uprising of 2008—has been somewhat different.

There, protestors have relied on “passive aggressive” tactics, including more than 120 cases of self-immolations. The Communist Party has blamed the Dalai Lama for inciting these activities and incarcerated many Buddhists who have attempted the same or urged others to do so. Most of these “separatist revolutionaries” have been labeled as traitors, given death sentences, or put behind bars.

But without forsaking its “iron fist,” the government in Beijing is now experimenting with different approaches to balancing majority-minority relations without the use of force.

One such unorthodox tool has been encouraging interracial marriages. In order to promote these matches, economic and social incentives have been offered, including paid vacations, social security, and employment prospects. Even though there are still few of these interracial marriages, the numbers have more than quadrupled since 2008, going over the 4,000 mark.

Not everyone is thrilled at the strategy, however. Many minorities view inter-marriage, like the earlier efforts to relocate Han to the Western regions, as just another strategy to absorb and integrate non-Han Chinese into the dominant Han culture. The ultimate goal, they warn, is the destruction of minority cultures.

Other parties are experimenting with media outreach. A Chinese film company known as Shenzhen Qianheng, for example, is developing a 3D cartoon called “Princess Fragrant,” a love story about an 18th-century Han Chinese emperor and his Uighur consort.  The cartoon’s Han creators hope it will encourage curiosity and communication between Uighurs and Hans.

Intermarriage and cartoons are certainly preferable to violent suppression. But they will not ease the tensions that have been boiling over for decades. The Chinese government needs to address the structural issues that have generated the mistrust and resentment. But Beijing is not going to allow the vast, geopolitically significant territories of Xinjiang and Tibet to secede from the country. A common ground has to be found and more freedoms have to be granted if China is indeed going to maintain its internal cohesion in a peaceful and productive way.

Tohti’s imprisonment and the higher degree of surveillance imposed in Xinjiang and Tibet shows that the Chinese government will not hesitate to keep the country unified by any means. The long-term effects of such actions, however, might potentially escalate the existing conflict. Sharon Hom, the executive director of Human Rights in China, believes that the Tohti verdict is only going to aggravate the overall domestic situation: “Rather than encouraging sensible, moderate voices like Tohti’s,” she said, “this will exacerbate the tensions in the region.”

After Tohti was incarcerated, many lost hope for the peaceful road to ethnic equality that he actively supported. It’s not too late, however, for the Chinese government to realize that a policy of carrots will be more successful in the long term than the sticks that it has recently deployed.

Piero Sarmiento is a contributor to Foreign Policy In Focus.