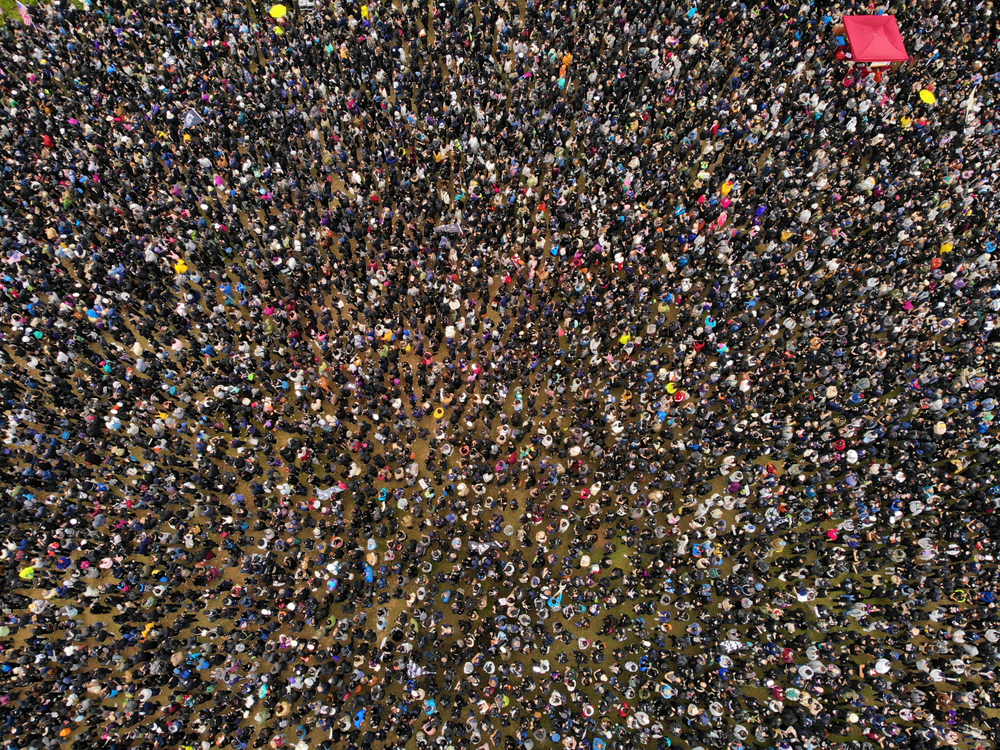 COVID-19 and the End of Autocrats

The outbreak of COVID-19 initially looked like a gift to autocrats around the world — until they botched it.
By John Feffer | August 26, 2020

The outbreak of COVID-19 initially looked like a gift to autocrats around the world. What better pretext for a state of emergency than a pandemic?

It was a golden opportunity to close borders, suppress civil society, and issue decrees left and right (mostly right). Donald Trump in the United States, Viktor Orbán in Hungary, Rodrigo Duterte in the Philippines, and others took advantage of the crisis to advance their me-first agendas and consolidate power. Best of all, they could count on the fear of infection to keep protestors off the streets.

However, as the global death toll approaches a million and autocrats face heightened criticism of their COVID responses, the pandemic is looking less and less like a gift.

The news from Mali, Belarus, and the Philippines should put the fear of regime change in the hearts of autocrats from Washington to Moscow. Despite all the recent signs that democracy is on the wane, people are voting with their feet by massing on the streets to make their voices heard, particularly in places where voting with their hands has not been honored.

The pandemic is not the only factor behind growing public disaffection for these strongmen. But for men whose chief selling point is strong leadership, the failure to contain a microscopic virus is pretty damning.

Yet, as the case of Belarus demonstrates, dictators do not give up power easily. And even when they do, as in Mali, it’s often military power, not people power, that fills the vacuum.

Meanwhile, all eyes are fixed on what will happen in the United States. Will American citizens take inspiration from the people of Belarus and Mali to remove their own elected autocrat?

Ibrahim Boubacar Keita (IBK) won the presidential election in Mali in 2013 in a landslide with 78 percent of the vote.

One of his chief selling points was a promise of  “zero tolerance” for corruption. Easier said than done. The country was notoriously corrupt, and IBK had been in the thick of it during his tenure as prime minister in the 1990s. His return to power was also marked by corruption — a $40 million presidential jet, overpriced military imports, a son with expensive tastes — none of which goes over well in one of the poorest countries in the world.

Mali is not only poor, it’s conflict-prone. It has been subject to military coups at roughly 20-year intervals (1968, 1991, 2012). Several Islamist groups and a group of Tuareg separatists have battled the central government — and occasionally each other — over control of the country. French forces intervened at one point to suppress the Islamists, and France has been one of the strongest backers of IBK.

Mali held parliamentary elections in the spring, the first since 2013 after numerous delays. The turnout was low, due to coronavirus fears and sporadic violence as well as the sheer number of people displaced by conflict. Radical Islamists kidnapped the main opposition leader, Soumaila Cisse, three days before the first round. After the second round, IBK’s party, Rally for Mali, claimed a parliamentary majority, but only thanks to the Constitutional Court, which overturned the results for 31 seats and shifted the advantage to the ruling party.

This court decision sparked the initial protests. The main protest group, Movement of June 5 — Rally of Patriotic Force, eventually called for IBK’s resignation, the dissolution of parliament, and new elections. In July, government security forces tried to suppress the growing protests, killing more than a dozen people. International mediators were unable to resolve the stand-off. When IBK tried to pack the Constitutional Court with a new set of friends, protestors returned to the street.

On August 18, the military detained IBK and that night he stepped down. The coup was led by Assimi Goita, who’d worked closely with the U.S. military on counterinsurgency campaigns. Instead of acceding to demands for early elections, however, the new ruling junta says that Malians won’t go to the polls before 2023.

The people of Mali showed tremendous courage to stand up to their autocrat. Unfortunately, given the history of coups and various insurgencies, the military has gotten used to playing a dominant role in the country. The United States and France are also partly to blame for lavishing money, arms, and training on the army on behalf of their “war on terrorism” rather than rebuilding Mali’s economy and strengthening its political infrastructure.

Mali is a potent reminder that one alternative to autocrats is a military junta with little interest in democracy.

Democracy in Action in Belarus

Alexander Lukashenko is the longest serving leader in Europe. He’s been the president of Belarus since 1994, having risen to power like IBK on an anti-corruption platform. He’s never before faced much of a political challenge in the country’s tightly controlled elections.

Until these last elections.

In the August 9 elections, Lukashenko was seeking his sixth term in office. He expected smooth sailing since, after all, he’d jailed the country’s most prominent dissidents, he presided over loyal security forces, and he controlled the media.

But he didn’t control Svetlana Tikhanovskaya. The wife of jailed oppositionist Sergei Tikhanovsky managed to unite the opposition prior to the election and brought tens of thousands of people onto the streets for campaign rallies.

Nevertheless, Lukashenko declared victory in the election with 80 percent of the vote (even though he enjoyed, depending on which poll you consult, either a 33 percent or a 3 percent approval rating). Tikhanovskaya fled to Lithuania. And that seemed to be that.

Except that the citizens of Belarus are not accepting the results of the election.

As many as 200,000 people rallied in Minsk this Sunday to demand that Lukashenko step down. In U.S. terms, that would be as if 6 million Americans gathered in Washington to demand Trump’s resignation. So far, Lukashenko is ignoring the crowd’s demand. He has tried to send a signal of defiance by arriving at the presidential palace in a flak jacket and carrying an automatic weapon. More recently, he has resorted to quiet detentions and vague promises of reform.

Just like the Republicans who appeared as speakers at the Democratic convention, key people are abandoning Lukashenko’s side. The workers at the Minsk Tractor Factory are on an anti-Lukashenko strike, and many other workers at state-controlled enterprises have walked off the job. Police are quitting. The ambassador to Slovakia resigned. The state theaters have turned against the autocrat for the first time in 26 years.

Despite COVID-19, Belarus doesn’t have any prohibitions against mass gathering. That’s because Lukashenko has been a prominent COVID-19 denialist, refusing to shut down the country or adopt any significant medical precautions. His recommendations: take a sauna and drink vodka. Like Boris Johnson and Jair Bolsonaro, Lukashenko subsequently contracted the disease, though he claims that he was asymptomatic. The country has around 70,000 infections and about 650 deaths, but the numbers have started to rise again in recent days.

There are plenty of oppositionists ready to usher in democratic elections once Lukashenko is out of the way. A new coordinating council launched this month includes former culture minister Pavel Latushko as well as prominent dissidents like Olga Kovalkova and Maria Kolesnikova.

Even strong backing from Russia won’t help Lukashenko if the whole country turns against him. But beware the autocrat who can still count on support from a state apparatus and a militant minority.

The End of Duterte?

Nothing Rodrigo Duterte could do seemed to diminish his popularity in the Philippines. He insulted people left and right. He launched a war on drugs that left 27,000 alleged drug dealers dead from extrajudicial murders. Another 250 human rights defenders have also been killed.

Still, his approval ratings remained high, near 70 percent as recently as May.

But Duterte’s failure to deal with the coronavirus and the resulting economic dislocation may finally unseat him, if not from office then at least from the political imagination of Filipinos.

The Philippines now has around 200,000 infections and 3,000 deaths. Compared to the United States or Brazil, that might not sound like much. But surrounding the Philippines are countries that have dealt much more successfully with the pandemic: Thailand (58 deaths), Vietnam (27 deaths), Taiwan (7 deaths). Meanwhile, because of a strict lockdown that didn’t effectively contain the virus, the economy has crashed, and the country has entered its first recession in 29 years.

Like Trump, Duterte has blamed everyone but himself for the country’s failings, even unleashing a recent tirade against medical professionals. But Duterte’s insult politics is no longer working. As sociologist and former member of the Philippines parliament Walden Bello observes at Foreign Policy In Focus, “The hundreds of thousands blinded by his gangster charisma in the last 4 years have had the scales fall from their eyes and are now asking themselves how they could possibly have fallen in love with a person whose only skill was mass murder.”

In the Philippines, presidents serve one six-year term, and Duterte is four years into his. He may well attempt to hold on for two more years. He might even pull a Putin and change the constitution so that he can run again. A group of Duterte supporters recently held a press conference to call for a “revolutionary government” and a new constitution. Another possibility, in the wake of recent bombings in southern Philippines, might be a declaration of martial law to fight Abu Sayyaf, which is linked to the Islamic State.

But the combination of the pandemic, the economic crash, and a pro-China foreign policy may turn the population against Duterte so dramatically that he might view resignation as the only way out.

Democracy in the Balance

Plenty of autocrats still look pretty comfortable in their positions. Vladimir Putin — or forces loyal to him — just engineered the poisoning of one of his chief rivals, Alexei Navalny. Xi Jinping has just about turned Chinese politics into a one-man show. Viktor Orbán has consolidated his grip on power in Hungary, Recep Tayyip Erdoğan has suppressed or co-opted the opposition parties in Turkey, and Bashar al-Assad has seemingly weathered the civil war in Syria.

Even Brazilian President Jair Bolsonaro, despite an atrocious record on both the pandemic and the economy, has somehow managed to regain some popularity, with his approval rating nudging above his disapproval rating recently for the first time since April.

The U.S. presidential elections might tip the balance one way or the other. Although America still represents a democratic ideal for some around the world, that’s not the reason why the November elections matter. Donald Trump has so undermined democratic norms and institutions that democrats around the world are aghast that he hasn’t had to pay a political price. He escaped impeachment. His party still stands behind him. Plenty of his associates have gone to jail, but he has not (yet) been taken down by the courts.

That leaves the court of public opinion. If voters return Trump to office for a second term, it sends a strong signal that there are no penalties for ruining a democracy. Trump operates according to his own Pottery Barn rule: he broke a democracy and he believes that he now owns it. If voters agree, it will gladden the hearts of ruling autocrats and authoritarians-to-be all over the world.

Voting out Trump may not simply resuscitate American democracy. It may send a hopeful message to all those who oppose the Trump-like leaders in their lands.

Those leaders may have broken democracy, but we the people still own it.