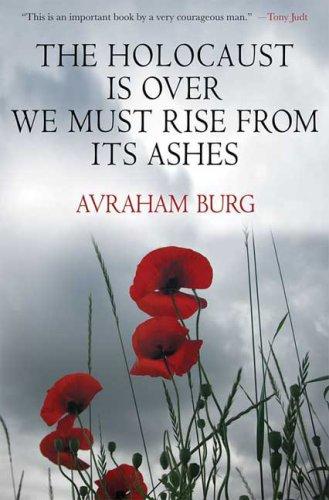 A left-leaning dissident Israeli makes the case that Israeli Jews have lost their way, and says to get back on track, Israel needs to admit to its share of responsibility for the plight of the Palestinians.
By Emily Schwartz Greco, Benjamin Tua | September 28, 2009 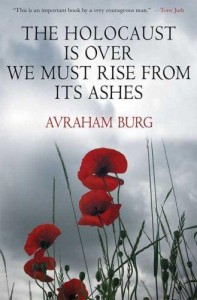 Avraham Burg, author of The Holocaust is Over: We Must Rise from its Ashes (Palgrave Macmillan 2008), is a left-leaning dissident Israeli whose views on issues such as Israel’s treatment of the Palestinians are well-known but hardly mainstream. Burg comes from a distinguished Israeli political family, and was himself speaker of Israel’s parliament, the Knesset, from 1999-2003 as a member of the Labor Party. He served as a paratroop officer in Israel’s Defense Forces, opposed the 1982 war on Lebanon, and was wounded in a 1983 grenade attack by an Israeli right-winger on a demonstration sponsored by Peace Now, an Israeli nongovernmental organization that supports a just peace and conciliation with the Palestinians. He also has been Chairman of the Jewish Agency and the World Zionist Organization. His mother, born in what’s now the Israeli-occupied West Bank, survived the Hebron massacre of 1929; his father was a refugee from Nazi Germany in 1939.

When the original version of Burg’s provocative book appeared in Israel in 2007, in Hebrew and under the title Defeating Hitler, it created a sensation. It was widely reviewed and broadly denounced, including by some of his friends and political allies. One enraged critic accused Burg of harboring “a deep anti-Zionist pattern.” Another charged him with conferring legitimacy on Israel’s delegitimization; and a member of the Knesset from the center-right Kadima Party said Burg should be denied burial in the National Cemetery in Jerusalem and should instead arrange for burial abroad.

The book’s reception in the United States, however, has been moderate, and the criticism somewhat muted. New Yorker editor David Remnick profiled the Hebrew version, its author, and the Israeli reaction in a long “Letter from Jerusalem” in July 2007; the English version has elicited commentary in the New York Times, the Los Angeles Times, and Time magazine. The Holocaust is Over and Burg were also featured on National Public Radio and on Amy Goodman’s Democracy Now! program, and have been the subject of intense, and often much less respectful, discussion on numerous blogs.

The book is an unsparing commentary on the most highly charged issues in Israel’s history. It’s an emotion-laden call for self-examination by Jewish Israelis and, to some extent, leaders of the American Jewish community. Burg sees many negative trends in Israeli society and policies. But he also sees possibilities for redemption, and the tenor of the book’s reception in the U.S. reflects both respect for the author and a greater willingness among American supporters of Israel to confront matters such as the impact of the creation of the Israeli state on the native Palestinian population.

Burg argues that today Jews are neither persecuted nor oppressed, and that Israel is a powerful state. Nonetheless, he maintains, Israeli Jews have become fearful and self-pitying oppressors. When it’s attacked or criticized, he says, Israel acts like “a small vulnerable country.” And it perpetuates a confrontational outlook based on the notion that Jews face a preternaturally hostile world. According to Burg, this posture is sustained by constant references to the Holocaust and by demonizing Israel’s enemies and exaggerating their power. Thus, everyone “is a Nazi, everyone is an Arab, everyone hates us, the entire world is against us.” Moreover, for some Israeli politicians, including Prime Minister Benjamin Netanyahu, says Burg, “all enemies are super enemies.” Everything is compared to the Holocaust, and political manipulation has turned the Arabs into the spiritual brethren of the Nazis. Therefore, “everything is allowed.”

Burg describes how, in Israeli extremist circles, “people dip into pools of hatred.” He talks of “horrible layers” of sanctimonious and slick racism that is not always recognized for what it is, is sometimes confused with patriotism, and even seeps into the highest levels of Israel’s government. Anti-Arab graffiti such as “Arabs Out” and “Transfer Now” (a euphemism for expulsion) remind Burg of the Nazi call of Juden Raus (“Jews Out”).

Jews, Burg argues, must acknowledge that Israel’s behavior contributes to the hatred of Jews, and that, while Israelis are not as culpable as its critics sometimes depict, they are not as good as they describe themselves.

Burg also levels criticism at the leadership of the American Jewish community. He characterizes Jews in the United States as a “one-issue” community whose leaders encourage dual loyalty; and he argues that American Jews have abandoned the domestic minority coalition with African Americans, Hispanics, and others “in the struggle for American justice and liberties.”

At the same time, he acknowledges the diversity of U.S. Jews. They understand that a White House that’s “good for Israel” should not necessarily do everything that Israel requests. Here, Burg’s argument is undercut somewhat by the fact that, despite concerns that presidential candidate Barack Obama might not turn out to be as uniformly supportive of Israel as his Republican opponent, a very high proportion of U.S. Jews joined the “minority coalition” that helped elect America’s first African American president.

In fact, many prominent Jewish leaders and activists in the United States are very critical of current Israeli policies, which they consider misguided and cruel. In this category are figures such as Henry Siegman, a former executive head of the American Jewish Congress and the Synagogue Council of America; financier George Soros; political activist and writer Rabbi Michael Lerner; political scientist Norman Finkelstein; and M. I. Rosenberg, Washington Director of the Israel Policy Forum. Moreover, the powerful American Israel Public Affairs Committee (AIPAC) is increasingly challenged by the U.S. branch of Peace Now and J Street (the latter was launched in April 2008), both of which support a new direction for U.S. policy in the Middle East and emphasize the need for a peaceful end to the Arab-Israeli conflict on the basis of a negotiated two-state solution.

This kind of criticism has grown significantly in recent years and may have reached a critical mass. Majorities of U.S. Jews now favor establishment of a Palestinian state and support the use of American influence with both sides to resolve the Arab-Israeli conflict. Of course, for the “Jewish masses,” as Burg calls them, to be effective in encouraging more balanced policies with respect to the Israeli-Palestinian conflict, strong leadership will be required in both the U.S. and Israel. America now seems to have it. Ultimately, however, key will be an Israeli leadership that recognizes that it is essential for it to give life to negotiations leading to a deal that Palestinians will be loathe to leave untested; and a Palestinian leadership able to forge a broad consensus that a state based largely on the pre-June 1967 borders will be the vehicle for the realization of Palestinians’ national aspirations.

Having made the case that Israeli Jews have lost their way, Burg tells us what they need to do to get back on track. To begin with, Israel needs to admit to its share of responsibility for the plight of the Palestinians in the occupied territories and in the refugee camps.

In fact, Israeli leaders such as former prime minister Ehud Olmert have taken some initial steps by expressing empathy for the suffering of the Palestinians. Likewise, Israeli Arabs acknowledge the tragedy of the Holocaust, and Palestinian Authority history textbooks now refer to Nazi massacres of Jews and anti-Semitism. A similar evolution with respect to Gaza and Israel also is possible and would help reduce suspicions regarding the intentions of the Palestinians.

Certainly, Burg argues, the Shoah must have an important place in the nation’s memory. But only when Israel frees the Arabs from the Nazi role that Israelis have assigned to them will Israel itself be free and able to join its Arab neighbors in solving the problems of both communities.

Equally important, Burg tells us, is the need for Israelis to recognize their diversity, be inspired by it, and become a beacon to a “new humanity, a light to many immigrant societies.” Israel is home to at least four peoples: Jews, Palestinians, non-Jewish Soviet immigrants, and hundreds of thousands of Asian migrant workers. And Burg places a great deal of hope on the “largely secular and often non-Jewish” immigrants from the former Soviet Union. He argues that the absorption of tens of thousands of non-Jewish relatives of Soviet Jews represents a return to the ancient Jewish tradition of welcoming those who wish to align themselves with the Jewish people and nation.

Burg also seems to suggest that the large numbers of Middle Eastern Jews may still serve as a bridge to the Arab and Muslim world. Following the establishment of the state of Israel, many of these immigrants no longer felt welcome in the countries where they had lived for centuries. But the cultural and linguistic affinities to their former homelands remain strong.

A Rejuvenated Judaism and a Brighter Future

Burg calls for “a new humanism, a rejuvenated Judaism,” in which Jews view the Holocaust not just as an issue for Jews but for all mankind, and in which Jews recognize the post-Holocaust change in the attitudes of non-Jews towards Jews and apply the phrase “Never Again” to all of humanity.

Genetic Judaism must end, Burg declares, and the link between Israeli citizenship and the Nuremberg Laws must be severed. Otherwise, Hitler will in effect continue to decide who is Jewish. Burg believes that all issues of human identity in general, and of Jews in particular, have completely changed. Therefore, “there is no choice but to redefine who belongs to the state of the Jews.” In his view, the answer to the Israeli occupation is more than withdrawal from the occupied territories. It also requires the creation of a new Jewish identity.

Israel, Burg says, is quickly approaching the point wherein it must determine its true identity and purpose. Israelis must face — and sever — the new roots of an alien “Jewish racism” that’s destroying them. In Burg’s view, Israel must be both moral and democratic. This, he argues, will facilitate a no-holds-barred struggle for justice that will rid Israel of malignant policies vis-à-vis its minorities and occupied neighbors.

This is an ambitious agenda. But there’s a strong base on which Israelis can build. Polls indicate that a majority of Israelis favor a two-state solution (as do Palestinians in the occupied territories), and there are strong voices in both Israel and the Palestinian territories and beyond calling for a negotiated resolution of the conflict. Despite Burg’s concerns about the rise of extremist groups on the Israeli right, in some ways Israeli society also has moved closer to the Israeli left, which has long militated on behalf of a return of all or almost all of the territory seized in the June 1967 war, in exchange for peace with the Palestinians and acceptance by the rest of the Arab world. Equally significant on the Palestinian side are statements by Hamas leaders to the effect that the movement will accept a state based on the June 1967 lines if this is approved in a referendum of the Palestinians.

These are encouraging signs in an otherwise gloomy environment. They are mutually reinforcing and could bolster the current U.S. administration’s efforts to open a path to the resolution of a conflict that just about everyone now understands needs to be settled soon.