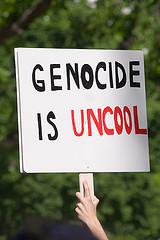 Efficacy, Wind-Blowing, and the Favored Villain We would like to thank Daniel Millenson for his contribution to this dialogue on divesting from Sudan. Both the idea of linking investment decisions with human rights as well as the targeted nature of this campaign, reflecting a concern to avoid harming civilians, are commendable.

However, activists, in the development of campaigns, must also be informed by efficacy in order to use limited time and resources in ways that are most likely to bring about the desired change. In this sense, the Sudan divestment movement fails on two grounds.

First, the campaign’s focus is highly indirect. It aims to influence the policies of mostly Chinese businesses, something that U.S. activists are only marginally positioned to accomplish given the tenuous links involved. Would anyone have seriously advocated that Chinese activists dedicate themselves to pushing a campaign to divest from U.S.-based Chevron, a company who’s oil-related activities in the 1980s in Sudan did much to fuel the country’s brutal north-south civil war?

Second, contrary to popular belief, and Washington’s own wind-blowing, the United States has done very little to actually address the conflict in Darfur, not even small, obvious steps which involve little more than cutting a check. As such, aid organizations in Darfur constantly operate on the brink of disaster, and have at times had to cut food rations for starving refugees. The ever-maligned African Union (AU) mission in Darfur has endured months without even being able to pay its troops, and lacks the most basic logistical equipment. Pushing for funding for these groups is a concrete, direct goal, avoiding the convoluted nature of divesting from Chinese oil companies. And it’s one that Darfur activists have largely failed to pursue in any meaningful way.

This isn’t to say that divestment cannot achieve any results, and Millenson points justifiably to the departure of Rolls Royce as a success of the movement. However, given the above, and that Sudan is cited as among the 20 least trade-dependent nations, and its macroeconomy is booming, there are clearly more sensible goals for activists.

As Millenson quite correctly notes, there are “too many vital economic interests…at stake to alter Darfur’s bloody status quo.” What this formulation excludes is that the both economic and geopolitical interests that have impeded international action on Darfur do not belong only to China, the favored villain. The same factors also drive U.S. policy in Sudan and elsewhere, which is clear enough from Washington’s strategic alliance [http://www.globalpolicy.org/intljustice/icc//2006/0402rubin.htm] with nefarious elements of the Sudanese government as part of the supposed “War on Terror,” and its cuddly relationships with brutal, often oil-producing regimes the world over, perhaps none more reprehensible than the Obiang dictatorship in Equatorial Guinea. Tellingly, there is no mass movement to divest from this “ruthless” (in the CIA’s own words) regime, which exports nearly two-thirds of its oil production to the United States, two phenomena of more than casual relation.

Instead, Millenson’s analysis coalesces quite snugly with the establishment-friendly narrative attacking China, and China alone, for being “crude-thirsty” and lamenting that it “was long content to stay mum on Darfur,” but has been “galled by western outcry.” It’s a reassuring story, but an incomplete one with little basis in the factual record.

Steve Fake, Kevin Funk, Emily Schwartz GrecoKevin Funk and Steve Fake are social justice activists who are currently writing a book about Darfur. They maintain a blog with their commentary called "confronting empire". They are contributors to Foreign Policy In Focus.