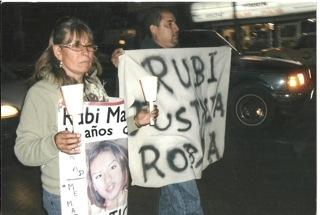 With the U.S. elections now over, many are speculating over who will succeed Hillary Clinton as Secretary of State to oversee U.S. foreign policy and the $47-billion U.S. Agency for International Development (USAID) annual budget. While a significant chunk of USAID spending goes to education and health programs, pockets of aid enlarge the already bloated military budgets of recipient governments. The result: less security and more violence against women, particularly women human rights defenders.

Indeed, the plight of these activists is so pervasive, yet unrecognized, that November 29th has been declared International Day of Women Human Rights Defenders. On the fifth anniversary of its founding, we take a look into Colombia and Mexico, the two countries with the largest number of documented instances of death threats against women human rights defenders—and coincidently two major recipients of U.S. aid.

According to reports from the United Nations and Inter-American Human Rights Commission, although both men and women human rights defenders are subjected to political violence, the situation of women must be analyzed and addressed separately given the particular nature of their experience.

Within Latin American societies (as in many others), women face significant social and cultural discrimination. Furthermore, because of their gender, women’s rights defenders endure sexual assault and harassment, including having to regularly deflect offensive sexual slurs aimed at discrediting their reputation and work. Women activists are increasingly leading efforts to demand the respect of women’s human rights and the end of violence and discrimination. Their struggles not only challenge the political and economic establishments in their countries, but also the patriarchal nature of power relations in their communities. This is why violence against them is more severe.

Colombia and Mexico—both flashpoints for political and drug-related violence—have become notorious places where women’s rights to a life free of violence and access to justice are increasingly threatened by the growing militarization and impunity of organized crime groups.

Since outgoing President Felipe Calderon launched his escalation of the war on drugs in 2006, at the behest of U.S. government, 45,000 troops have been deployed throughout Mexico. Instead of providing more security, the militarization of Mexico has led to the death of over 50,000 people, with thousands more displaced or disappeared. The Mexican government claims that the majority of these deaths are individuals connected with organized crime.

But ordinary citizens, unfortunately, make up the majority of those murdered and disappeared; they are the collateral damage caused by the so-called war on drugs, initiated and funded by the U.S. government. Since 2008, the United States has been silently bankrolling Mexico’s militarization through the Merida Initiative, a program initiated by the Bush administration and continued under Obama. Other hidden agendas may be at work, namely increased military policing under the banner of narcotic and law enforcement to help facilitate economic “free trade” expansion for transnational corporations.

It is not a coincidence that Ciudad Juarez is ground zero in the Mexican war on drugs. Of the 50,000 dead, approximately one in four have died in this border city of some 1.5 million people. Ciudad Juarez was once a symbol of globalization and neoliberalism when the maquilas were built following the passage of the North American Free Trade Agreement (NAFTA). These days, Ciudad Juarez has become ground zero for femicides. Since 2001, an estimated 600 women have been killed and 3,000 more disappeared. The increasing militarization of the area has brought “new threats and additional risks to women human rights defenders,” write Andrea Medina Rosas and Laura Carlsen.

One of the best-known cases of the plight of women human rights defenders is the late Marisela Escobedo Ortiz. Two years ago Marisela was assassinated outside of the governor’s office in Chihuahua, Mexico. She was protesting the release from prison of her daughter’s murderer, Sergio Barazza. Marisela became an ardent women’s human rights defender after the violent death of her daughter Rubi, whose body was found burned and dismembered in a garbage bin. Soon after Sergio’s release, Marisela was killed. Norma Andrade of Nuestras Hijas de Regreso a Casa recounts a phone conversation she had with Marisela moments before she was killed. “‘Norma, they want to kill each one of us. They are going to kill us.’ And afterwards they killed her.”

According to a Shadow Report to CEDAW from the Iniciativa Mesoamericana de Mujeres Defensoras, between 2005 and 2012, violence against women in Mexico claimed the lives of 13 female journalists. In the past two years alone, 14 women’s rights defenders have been killed. None of the crimes have been prosecuted. In Mexico, only 2 percent of all crimes committed are solved or prosecuted.

These stories of terror in Mexico have their counterpart in the southern hemisphere. Colombia, the other most dangerous country for women human rights defenders in the region, seems to have shared best practices with their Mexican counterparts. The country has been one of the largest recipients of U.S. military aid since the Bush administration’s $6-billion “Plan Colombia” was instituted. Just in 2006, Colombia received $72 million in U.S. aid, of which approximately 80 percent went to the military and police. The Fellowship of Reconciliation uncovered evidence that U.S. aid went “to assist Colombian military units that have reportedly violated human rights.”

Colombia continues to suffer one of the worst humanitarian and human rights crises in the world. Women’s rights defenders are systematically stigmatized and threatened, dragged through criminal proceedings on trumped-up charges, and made targets of sexual violence and murder by all armed actors in the conflict. Since President Juan Manuel Santos took power in August 2010, the Colombian government has demonstrated a more open attitude toward supporting and engaging civil society. However, despite the change in tone, the situation on the ground continues to cause concern. According to a report from Front Line Defenders, in the first three months of 2011, nine human rights defenders were killed, 68 were threatened, and four disappeared.

Like Mexico, the war in Colombia justifies all forms of persecution against those who dare to challenge the establishment, even on matters that bear little relation to armed conflict. Mónica Roa, a 36-year old lawyer and women’s rights defender who co-founded Women’s Link Worldwide, is one such defender whose work for women’s reproductive rights endangers her life. “Since I was 28, I have been with bodyguards,” Roa told us in a recent interview. “One thing I think about often is how I’m putting in danger the people that are around me, and that’s a difficult thought to handle.”

In 2006, Roa won a landmark case in the Colombian Constitutional Court that established a woman’s right to an abortion in limited circumstances. Roa later filed a lawsuit calling for the enforcement of the court’s decision, which triggered the deputy inspector general to launch criminal defamation allegations against her. Earlier this year, the Constitutional Court ruled in favor of 1,201 women who brought a constitutional challenge against the inspector general and government officials for violating the right to information of women and girls of reproductive age. These government authorities were not only trying to censor information; they were disseminating biased and distorted information, like that the morning after pill was not an emergency contraception but instead an abortion pill.

Monica Roa’s case demonstrates a worrisome trend now being used to discredit women human rights defenders: the use of unfounded criminal proceedings to mire them in a byzantine legal process. The criminal justice system is now being abused to impugn women’s rights defenders’ professional and personal lives, often forcing them to divert time away from their human rights work to devote towards their legal defense. These are the same criminal justice systems that have been “strengthened” with U.S. aid through its law enforcement initiatives.

In Mexico, women’s rights defenders are also facing legal harassment for their work. Just last month, Lucha Castro, leader of the Centro de Derechos Humanos de las Mujeres, A.C. in Chihuahua, faced a media and political campaign to discredit her influential work in defense of other women activists. Castro has been calling for transparency in the investigation of the 2010 killing of Marisela Escobedo Ortiz. Lucha, who has been vocal in her denouncement of public officials, was herself charged with manipulating Marisela’s family and obstructing justice. By publishing as fact the accusations against Lucha, the mainstream Mexican media has also played a part in discrediting her and other women’s rights activists who have been seeking justice for the victims of femicide in Ciudad Juarez.

Women-led human rights organizations must raise money to hire security guards, buy security cameras, and pay for expensive lawyers’ fees. “If women’s rights defenders don’t take care of the threats and don’t manage to vindicate their own rights, then we are sending a message to the women we usually defend that there’s no hope to make this a priority,” said Mónica Roa. “On one hand there is this wish to say, it’s not that important, nothing will happen. But that sends a very wrong message to the population that we are trying to work for.”

According to a March 2012 special report on women human rights defenders in Mesoamerica, “The militarization and massive influx of federal agents to combat insecurity has not successfully reversed this violent situation. On the contrary, violations of human rights by security forces—particularly against youth and women—are on the rise.”

While it is crucial to provide financial, legal, and moral support to these women human rights activists, we must also stop the militarization of their countries, which is further endangering their lives and that of other women. One clear way to do this is to halt U.S. military aid to countries like Mexico and Colombia. The upcoming nomination process for U.S. secretary of state presents an opportunity to raise the urgent issue of how U.S. military and foreign aid is further militarizing Latin American countries and increasing violence against women.