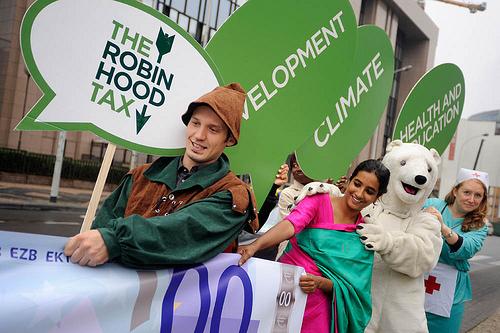 Why is Europe leaving the United States behind on applying a small tax on financial transactions?
By Sarah Anderson | June 30, 2011 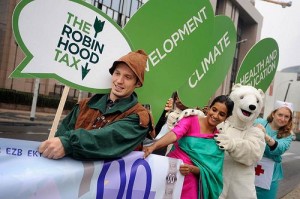 Out of the ashes of the 2008 financial crisis, an idea that progressives have been kicking around for decades – a financial transactions tax (FTT) – took on new life.

There were high hopes that the G-20, which had declared itself the “premier forum for international economic coordination,” would take up the proposal as a way to raise massive revenues to pay for the costs of the crisis and also discourage reckless short-term financial speculation.

And there were some early encouraging signs. In the summer of 2009, the chief financial regulator of the United Kingdom, Europe’s biggest financial market, came out strongly in support of expanding that country’s existing tax on securities trades to include derivatives and foreign exchange. By the fall, the leaders of Germany and France pledged to put the issue on the agenda of the G-20’s summit in Pittsburgh. Meanwhile, there seemed to be at least a small kernel of potential in the Obama administration, as the president lashed out at “fat cat bankers” and proposed a levy on top banks to pay for bailouts.

Today, however, European leaders appear to have given up on a G-20 agreement and are going ahead on their own. The European Commission has included an EU-wide financial transactions tax in its budget proposal for 2014-2020. According to reports, the EC estimates that it would raise about 30 billion euros ($43 billion). The EU tax commissioner, who previously insisted that such taxes would only be feasible if coordinated globally, has now said there “there are ways to implement a financial transaction tax in the EU while mitigating the main risks identified.”

This comes on the heels of resolutions in support of such taxes that passed by strong majorities in the European Parliament and the French national parliament. A new Eurobarometer poll shows 61 percent of Europeans favor the plan.

Why has the debate moved so much further ahead in Europe than the United States?

In a story headlined “Obama Seeks to Win Back Wall St. Cash,” The New York Times described a recent White House meeting between the president and two dozen Wall Street honchos aimed at warming up relations with an industry that has been an important source of campaign donations.

In the midst of this charm offensive, it’s easy to understand why a tax on these potential campaign benefactors would not be on the top of the administration’s agenda.

Although European leaders are certainly not immune to pressure from financial lobbyists, they are not as dependent on them for campaign cash. In France, corporate contributions are prohibited altogether. In Germany, political parties can accept corporate money, but they can’t purchase ads on TV or radio, and overall expenditures are a small fraction of the more than $1 billion spent during a U.S presidential election cycle.

The Greek debt crisis has created a crushing need for new revenue sources, while increasing the clout of the German and French governments, since they will have to foot much of the bailout costs. It has also opened many eyes to the dangers of financial speculation.

Risky financial deals were part of what got the country into this mess in the first place. In 2001, Goldman Sachs helped the government of Greece cook their books to hide debts from European regulators. The scheme involved a complex swap of currencies, using fictional exchange rates that made it look, at least temporarily, that Greece hadn’t sunk as deeply into debt as it really had. This shady deal was one reason Greece’s economic problems spiraled out of control. If a financial speculation tax had been in place when Greece cut the Goldman deal, it would’ve added significantly to the cost of their “creative accounting.”

Today in Greece, the speculators are once again making a bad situation worse. “Hedge funds are speculating hugely on the outcome of the current negotiations, arguably hastening the likelihood of default,” says Max Lawson, head of development finance and public services for Oxfam Great Britain. “Anger toward speculators who are driving up the cost of government debt is a vote winner for European leaders and a key reason governments support the financial transaction tax.”

French President Nicolas Sarkozy stands out among world leaders not only as the most vocal advocate of financial transactions taxes but also as the only one who has said he would like to see all the money go to health and climate programs in the poorest countries.

Strange as this may sound to American ears, this approach actually attracts votes in France, where Sarkozy will be up for re-election next year. (Recall the vice-presidential debate where Joe Biden was asked what would need to be cut first from the Obama budget plan and he replied “foreign assistance.”)

As Marie Yared, project manager for international advocacy with the French HIV/AIDs group Aides, explains it, “Sarkozy is keen to have the ‘glory of France’ everywhere. He wants us to be seen as a generous country. It’s a post-colonial thing.” She also noted that Carla Bruni, Sarkozy’s wife, lost a brother to AIDS and has been very helpful in supporting domestic and international programs to fight the disease.

German Finance Minister Wolfgang Schäuble is a long-time conservative leader who first served in the cabinet in the Helmut Kohl regime in the 1980s. When I asked Peter Wahl, of the German research group WEED, why Schäuble would support the FTT, his first reaction was, “he has no choice.” Chancellor Angela Merkel made a promise to support such taxes when her Christian Democratic Union was in a coalition with the Social Democrats. When she formed a new ruling coalition with the pro-business Free Democrats after her 2009 re-election, leaders of that party made clear their opposition to the FTT. But Merkel stuck to her promise, and her new finance minister, Schäuble, had to go along. Wahl was quick to point out, however, that Schäuble represents a type of European conservative who does not take a knee-jerk position against taxes – a breed that is nearly extinct in this country.

Despite all the recent progress, actual implementation in Europe is by no means a sure thing. There remain differences of opinion over the design of the tax and how it will be spent. For example, the German government has objected to using the revenue for the budget of the European Commission, the bureaucracy of the EU. Instead, they prefer to have revenues flow into national coffers, with some agreement likely on a portion being spent to meet international needs. Moreover, since the 2010 election, the UK government has not supported the proposal (although they have implemented other financial sector taxes). In case they cannot be brought on board, implementation within the 17-country eurozone is being discussed as a fallback to a coordinated tax on all 27 EU countries.

Ultimate success will depend on continued pressure from the labor, global health, environmental, and other civil society groups that have worked together across borders for the past 18 months. Although the campaign is international – activists in more than 40 countries took part in a global day of action on June 22 – the primary focus now is on European policymakers. Victory there would give a huge boost to campaigns to tax speculation in many other parts of the world, including the home of Wall Street.