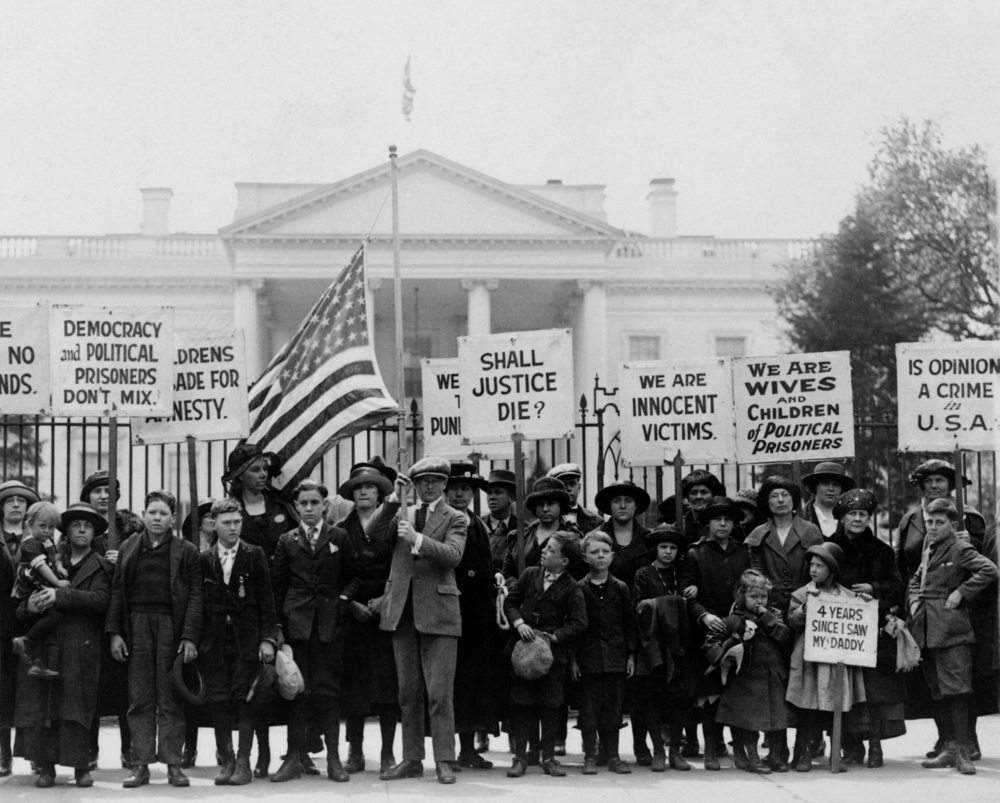 The families of World War I political prisoners protest outside the White House. (Shutterstock)

Everything About 2018 Shows Why Americans Should Remember World War I

The Great War had it all: An administration that hated protesters. A compliant Supreme Court. National anthem panics and literal flag kissing!
By Harry Blain | September 7, 2018

Instead, it’s identified by a vague mixture of concepts, names, and events: the Lusitania, “Wilsonian Idealism,” Versailles, Theodore Roosevelt.

The First World War — known as the “Great War” in Europe — has largely faded from memory on this side of the Atlantic. Arguably, this is because our involvement was so brief — joining the slaughter over two years after it began and leaving it just over eighteen months later.

But, beyond the fact that it claimed the lives of over 100,000 Americans, there are good reasons why, a century later, we should remember this chapter in our history, not least because it has ominous parallels with today.

The political science textbooks tell us that “checks and balances” are central to American democracy.

And, with a mechanical and historically dubious recounting of Marbury v. Madison (1803), students are immediately taught about the rise of one of these great barriers to tyranny: judicial review. Unlike in the crusty old monarchies, they learn, wise and dispassionate judges can protect us from oppressive laws and power-hungry politicians.

The Founding Fathers would find this view surprising. As Alexander Hamilton succinctly put it, the power of the judiciary would always be limited because it had “no influence over either the sword or the purse.” And Madison repeatedly warned about the weakness of “parchment barriers” laid down in the constitution.

Far from merely accepting the various censorship laws passed by Congress, one of the country’s most revered Supreme Court Justices, Oliver Wendell Holmes, affirmatively endorsed them.

The crime was committed by Charles Schenk, General Secretary of the Socialist Party in Philadelphia, whose organization was distributing leaflets protesting the first ever nation-wide conscription law (the Union and Confederacy had separate conscription laws during the Civil War).

Opposition to the draft came from many motives and groups: socialists who saw this as the rich man’s war and the poor man’s fight; second- or third-generation immigrants whose parents had come to America to escape conscription in Europe; German- or Austrian-Americans who objected to killing their own friends and family in the trenches.

But for Holmes, none of this mattered.

Starting with the obnoxiously famous remark — “The most stringent protection of free speech would not protect a man in falsely shouting fire in a theatre and causing a panic” — Holmes argued further: “When a nation is at war, many things that might be said in time of peace are such a hindrance to its effort that their utterance will not be endured so long as men fight, and that no Court could regard them as protected by any constitutional right.”

This was essentially an eloquent, lawyer-speak translation of Attorney General Thomas Gregory’s chilling promise to the anti-war movement: “May God have mercy on them, for they need expect none from an outraged people and an avenging government.”

Schenk was found guilty and so were many others.

Few high-profile socialists avoided the reach of the Espionage and Sedition Acts, which defined both “espionage” and “sedition” as almost any criticism of the war. A very partial list of targets would include Eugene Debs, Rose Pastor Stokes, Joseph Stilson, Frederick Krafft, Abraham Sugarman, and Edwin Firth.

Not to mention less famous people like Walter Matthey in Iowa, who was sentenced to a year in jail for (in the words of the attorney general) “attending a meeting, listening to an address in which disloyal utterances were made, applauding some of the statements made by the speaker… and contributing 25 cents.” (Details of all these cases can be found in HC Peterson and Gilbert C Fite’s book, Opponents of War, 1917-1918).

Thankfully, we have the “fourth estate” for times like these: dogged, fearless, whiskey-drinking journalists working through the night to keep our democracy on life support.

Here’s a sample of how the New York Times’ editorial board approached this mission during and after the war (again, documented by Peterson and Fite):

Meanwhile, the Washington Post lamented the lack of war enthusiasm on the East Coast, in contrast to the “healthful and wholesome awakening in the interior of the country,” which was praiseworthy “in spite of excesses such as lynching.”

Other “excesses” included tarring-and-feathering, vandalism against people who didn’t buy enough Liberty Bonds, the burning of German books, and — almost unbelievably — rituals of forced flag-kissing, which, “by 1918, had become so frequent” that they were “hardly first-rate news.”

Eerily, Peterson and Fite recount: “Along with flag-kissing came a great sensitiveness about respect for the national anthem,” as “disorderly conduct” fines were dished out to people who failed to stand for the Star-Spangled Banner across the country.

Drawing from the Dissenters

The main reason we know about these events is because they were meticulously documented by an obscure organization called the National Civil Liberties Bureau, initially part of the American Union Against Militarism.

On August 31, 1918, the Bureau had its New York City offices raided and records seized by the Justice Department.

Yet, it survived the war years, and renamed and reorganized itself into what we now know as the American Civil Liberties Union (ACLU) — a crucial, if not saintly, defender of the Bill of Rights ever since.

The ACLU will be the first to tell you that we are now living under a president whose gutter patriotism and disdain for free speech rivals the worst demagogues of that shameful era.

As this same president edges closer to war with Iran — and continues the permanent war against “terrorists” — we would do well to heed the advice of Wisconsin Senator Robert LaFollette, expressed in one of Congress’s greatest speeches on April 4, 1917:

“We should not seek to hide our blunder behind the smoke of battle to inflame the mind of our people by half-truths into the frenzy of war in order that they may never appreciate the real cause of it until it is too late.”