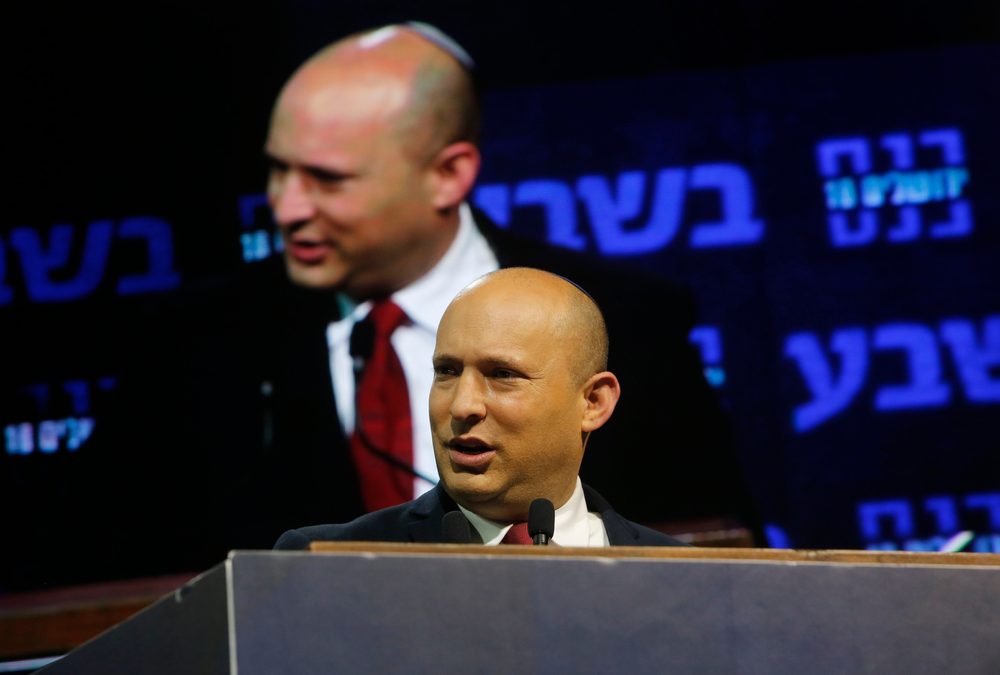 The new government — if it takes power at all — is united only around ousting Netanyahu. Here’s what that could mean.
By Phyllis Bennis | June 4, 2021

If approved, the new coalition would anoint as prime minister Naftali Bennett, a former Netanyahu ally who supports settlement expansion and annexation of much of the West Bank, and who is significantly further to the right than Netanyahu himself. In theory, if it stays in power for two years, the more centrist Yair Lapid would then take over as prime minister. But that’s a big “if” — and the new coalition may not even survive its initial vote of confidence next week.

More importantly, whoever is the next prime minister, Israel’s politics — particularly on Palestinian rights — have in the last several years shifted dramatically to the right, and it is the far right wing of this new “coalition” that remains the most powerful.

1. Israel’s emerging anti-Netanyahu coalition may or may not actually take power.

Netanyahu has shown a canny ability and ruthless willingness to use any methods to stay in power — not least to avoid prison on multiple counts of corruption — and he’s got a whole week to do so. He is expected to use bribes, threats, and punishments to lure at least one member out of the 61-vote bare majority coalition — and that would be enough to scuttle the deal.

Many anticipated that last month’s war against Gaza would increase public support for Netanyahu, but it seems it did not — at least not enough. But he has never given up using war to gain support, so keep an eye out for potential provocations against the usual targets of Netanyahu’s foreign policy, including Gaza, Iran, or perhaps Lebanon.

2. If Netanyahu is defeated and the “change coalition” does take over, its most powerful figure will be the ultra-right Naftali Bennett.

Bennett was a longtime Netanyahu supporter and remains a staunch backer of illegal Jewish settlement expansion and annexation of huge swathes of Palestinian territory in the West Bank. He’s significantly to the right of Netanyahu.

The “change coalition” parties range from Bennett’s extremist New Right Party to Yair Lapid’s centrist Yesh Atid formation — and even includes the left-Zionist Meretz party and the Palestinian Ra’am party. Its unity is limited to ousting Netanyahu. Its breadth and political diversity render it completely unstable, which will make any serious political action beyond maybe passing a budget impossible. That means political paralysis as long as it holds on to power.

3. Majorities in both blocs in the Knesset — Netanyahu’s and the “change coalition” — largely agree on maintaining the status quo of Israeli occupation and apartheid, as well as its regional anti-Iran militarism.

Despite the (likely short-lived) presence of centrist and left parties and a Palestinian party, the new coalition’s political power remains firmly in the center-right to extreme right spectrum that reflects Israeli politics overall. There will almost certainly be no resumption of calls for a “two-state solution,” (something long ago rendered impossible anyway because of escalating Israeli expropriation of Palestinian land) since Bennett opposes it even more vociferously than Netanyahu.

4. Even if it wins and manages to hold onto power, the “change coalition” will not bring significant improvement in the lives or rights of Palestinians.

As long as the U.S. continues to provide Israel with virtually unlimited economic, military, diplomatic, and political support and protection, regardless of Tel Aviv’s violations of international law and the systemic inequality and discrimination with which it treats the Palestinians, Israel has no reason to change.

For years, Netanyahu has claimed that he alone can deliver continued U.S. support and military aid. In fact, if the anti-Netanyahu coalition wins, a new prime minister — even one actually more extreme in his racist anti-Palestinian views than his predecessor — might well be seen as a boon for the White House and some in Congress, for whom Netanyahu has become somewhat of a liability.

Those politicians, largely Democrats, may be eager to look like they’re responding seriously to rising public opposition to Washington’s enabling of Israeli apartheid and human rights violations. Embracing a new prime minister with less well-known baggage in Washington could be just enough to clinch the deal.

Phyllis Bennis directs the New Internationalism Project at the Institute for Policy Studies. She’s the author of the book Understanding the Palestinian-Israeli Conflict.