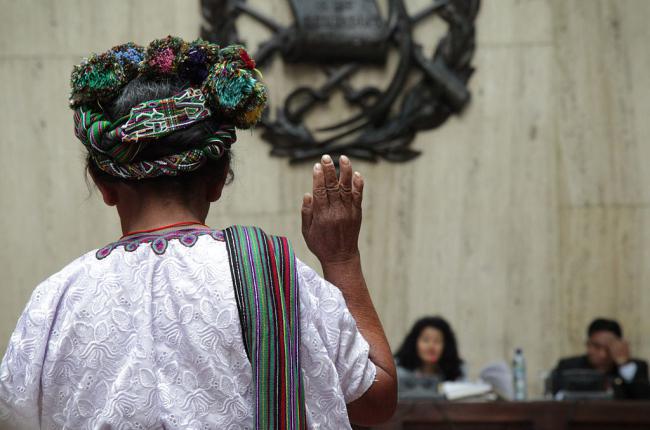 Guatemala's Constitutional Court undid its historic genocide ruling in 2013. The trial is set to resume on January 5, but faces last-ditch efforts to derail it.
By Jo-Marie Burt | December 29, 2014

This article is a joint publication of Foreign Policy In Focus and NACLA.

On May 10, 2013, a Guatemalan court found former dictator and army general José Efraín Ríos Montt guilty of genocide and crimes against humanity. It was an historic decision: the first time a former head of state had been prosecuted successfully in his native country for genocide, and the first time a high-level leader was convicted in Guatemala for the horrendous crimes that took place during that country’s 36-year civil war.

I was in the courtroom the day the verdict was emitted, one of a team of international observers monitoring the process. A court of law weighed the evidence, and found that there had been genocide. The victims, members of the Maya Ixil community, rejoiced at the ruling. It was a vindication of their three-decade struggle to have their pain and suffering acknowledged, and those responsible punished.

However, under pressure by economic elites and sectors of the armed forces, the Constitutional Court undid the ruling just ten days later, arguing a legal technicality. It set the trial back a month and thereby invalidated the verdict.

Domestic and international groups appealed to the Constitutional Court to overturn the ruling, arguing that the proper route to challenge the decision was through a normal appeal process, and that the majority opinion was flawed. Two judges wrote dissenting opinions substantiating these and other points. The Constitutional Court held fast to its decision.

A new tribunal was named to oversee the retrial, but claiming that its docket was full, said it would not be able to hear the genocide case until January 2015. In the meantime, the crusading attorney general who was the architect of the genocide case, Claudia Paz y Paz, was forced out of office early, and the presiding trial judge, Yassmín Barrios, has faced legal sanctions and media opprobrium.

With the new year upon us, the genocide trial is slated to begin on January 5. Several obstacles to restarting the trial have been cleared. Most significantly, on December 18, the Constitutional Court unanimously ruled that the decision of a pretrial judge, which argued that the proceedings should return to November 2011, prior to the date of Ríos Montt’s indictment, was illegal and should be nullified. That was the same ruling that, on April 18, 2013, dramatically halted the genocide trial in mid-process for the first time. The ruling vindicates the decision of trial court judge Yassmín Barrios, who at the time refused to acknowledge the legitimacy of that decision, deeming it clearly illegal.

But the amnesty question still remains a potential obstacle. During the 2013 proceedings, an appeals court rejected one of the many legal motions presented by Ríos Montt’s defense team calling for an earlier amnesty law to be applied. That amnesty law, passed in 1986 by then-dictator General Mejía Víctores with the intention of guaranteeing immunity from prosecution for all crimes committed during his government as well as that of his predecessor, Ríos Montt, in which he served as defense minister, was annulled. Another law, the National Reconciliation Law, allowed for amnesty for political crimes, but explicitly excluded international crimes of genocide, torture, and crimes against humanity. However, in one of several perplexing decisions, the Constitutional Court sent the ruling back to the appeals court, requesting that the decision be substantiated. While this may appear non controversial, many observers feared that it leaves the door open for the appeals court to reverse its ruling and apply the 1986 amnesty law.

Over 60 judges recused themselves from participating in the appeals court called upon to rule on the amnesty question, demonstrating the controversial nature of endeavor. But, as Edgar Pérez, a human rights lawyer internationally recognized for his work on behalf of the victims of Guatemala’s internal armed conflict, and who represented the victims in the genocide case, told me in October on a visit to Washington, D.C., December is the “month of surprises” in Guatemala. Indeed, just two days before Christmas, the appeals court was formally constituted, with five working days to emit its decision.

International organizations, including the Washington Office on Latin America (WOLA), a non-profit human rights organization where I am a senior fellow, have published a statement calling on the appeals court to limit itself to following the Constitutional Court’s request to substantiate its decision that the amnesty law is not applicable. We reminded the appeals court that both Guatemalan law and international law do not allow amnesty for international crimes, and that the Guatemalan state has the international obligation to investigate, prosecute, and punish grave violations of human rights. The same argument was put forth in an op-ed by Spanish Judge Baltazar Garzón, who also noted that if amnesty is applied in the Ríos Montt case, the trial could continue in a foreign court under the principle of universal jurisdiction.

In the meantime, Congress has been convened for a special session on December 29, presumably to extend the state of emergency currently in place due to a devastating drought. There is concern that this might provide an opportunity for the Congress to decree a new amnesty law altogether. This fear is not entirely unfounded. In May 2014, the Guatemalan Congress passed a resolution declaring that there had been no genocide during the 36-year civil war, and calling for “national reconciliation.” Civil society groups decried this as blatant interference in the judicial process. President Otto Pérez Molina, himself an army commander in the Ixil area during the Ríos Montt’s rule, has also declared repeatedly that there was no genocide in Guatemala.

If the genocide trial does restart, the role of the international community will be central to ensuring a fair process. There is little doubt that there will be strong opposition from conservative elites and from sectors of the military. But the desire of the victims for truth and justice remains steadfast. Like victims in other hard-fought battles to overturn systems of oppression, they know that, as Martin Luther King, Jr. famously proclaimed, “the arc of the moral universe may be long, but it bends toward justice.”

Jo-Marie Burt teaches politics at George Mason University. She is former editor of NACLA Report on the Americas, and was a researcher for the Peruvian Truth and Reconciliation Commission. As a Senior Fellow at the Washington Office on Latin America (WOLA), she was an international observer to the Fujimori and Rios Montt trials. She is currently writing a book about human rights prosecutions in Latin America. Follow her on Twitter @jomaburt.