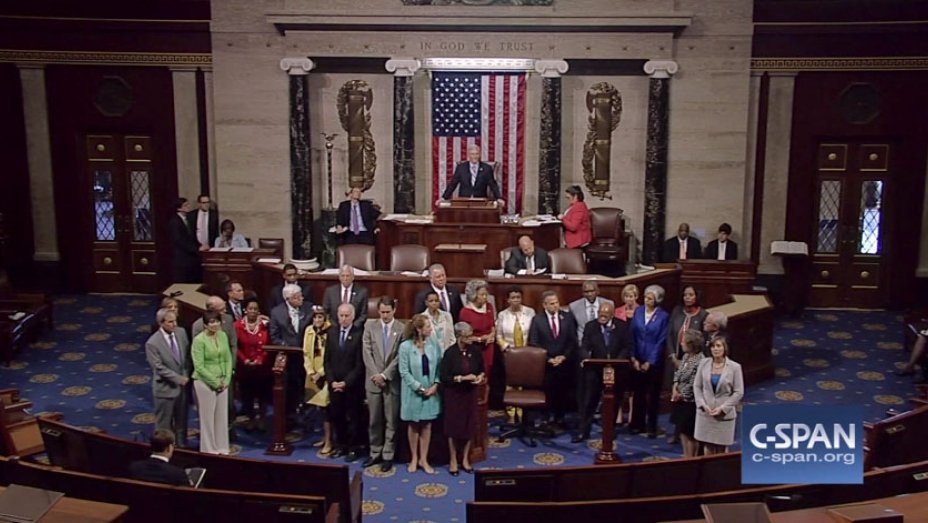 The House Sit-In Would’ve Been More Powerful if It Rejected ‘No Fly, No Buy’

It was almost midnight when I found myself glued to the live video of scores of Democratic members of Congress, who were then about 12 hours into their historic sit-in. They were calling for a vote on new gun restrictions following the Orlando nightclub massacre.

They occupied the House, jerry-rigged a television broadcast when the Republican leadership took C-SPAN off the air, and continued rising one after another to speak with passion, reminding the nation that business as usual is no longer okay. They continued their protest until well into the next day.

Led by Rep. John Lewis, an icon of the civil rights movement, they insisted that there be no congressional recess without a vote on their proposed gun control bills. They reminded the world that since 1968, more Americans have been killed by gun violence than in all the wars in U.S. history.

It was a moving, empowering thing to see. And yet, there’s a huge problem.

The Democrats’ own leadership has refused to allow their own now-insurgent party to officially endorse the most sensible (however insufficient) gun control proposals — including outlawing assault weapons, removing the prohibition on federal research on the public health consequences of gun violence, and universal background checks. Those things, lethally opposed by the NRA, wouldn’t stop the epidemic of gun violence in this country by themselves. But they would certainly help.

A few members rejected the restrictions. At 12:35 in the morning, Texas Rep. Beto O’Rourke, one of those who’d set up the live-streaming of the debate after the Republican leadership turned off the C-SPAN cameras, called for all three of those goals.

But for the most part, the Democrats limited their demands to only two things. First, they proposed a small, completely insufficient expansion of background checks. Second — and more dangerously — they repeated a slogan of “no fly, no buy.” That refers to a proposal that would ban anyone on law enforcement’s so-called No Fly List from buying a weapon.

If implemented, this would do nothing to prevent gun violence, nearly all of which is perpetrated by people who aren’t on that list. But it would do much to increase racial profiling and Islamophobia.

If we were talking about actually preventing terrorists from buying weapons, that would be one thing. But the government’s various terrorist watch lists, including the No Fly List, aren’t lists of terrorists. They’re lists of people — American citizens, green-card holders, visitors, citizens of other countries — who end up on government lists for reasons we and they never know.

Maybe they share a name with someone once suspected of knowing someone whose second cousin once Skyped with someone else thought to be a would-be terrorist. Or perhaps their college roommate ended up trying to go to Syria. Maybe a few of them really do have dangerous intentions.

But there are thousands of people on these lists. Most of them can’t even find out why they’re not allowed to fly, let alone challenge the prohibition. “Our nation’s watchlisting system is error-prone and unreliable,” the American Civil Liberties Union explains, “because it uses vague and overbroad criteria and secret evidence to place individuals on blacklists without a meaningful process to correct government error and clear their names.”

If it were up to me, I’d prohibit anyone — anyone, on or off those lists — from buying or possessing these lethal weapons. But it’s not up to me — and unfortunately the “no fly, no buy” rule proposed at the surprisingly militant House sit-in isn’t going to prevent gun violence either.

What it is going to do, unfortunately, is legitimize watch lists as the basis for a politically popular version of gun control.

Those vague criteria the ACLU calls out end up being applied disproportionately to Muslims, Arabs, South Asians, and others wrongly assumed to be linked to terrorism. We shouldn’t forget that Nelson Mandela remained on the U.S. “terrorist” list until 2008. Even John Lewis, who’s leading the sit-in, was reportedly once on the No Fly List himself.

It’s terribly sad that some of our most principled, consistent members of Congress — members of the Black Caucus, the conscience of the Congress, and the Progressive Caucus, who work against racism, racial profiling, Islamophobia, war, and beyond — are among those urging even greater reliance on this ineffective system in the name of preventing gun violence.

The congressional sit-in brought some moral power and renewed urgency to the cause of gun control. It’s a challenge to the partisan bickering that’s paralyzed Congress for years. It may even ignite a turn towards re-legitimizing Congress — long demonized as the least effective, least useful, least popular institution around.

That reversal would be far more likely if these members of Congress, as they consolidate their new moral credibility, would finally reject the current iteration of the No Fly List as the basis for gun control — or a legitimate method of counter-terrorism.