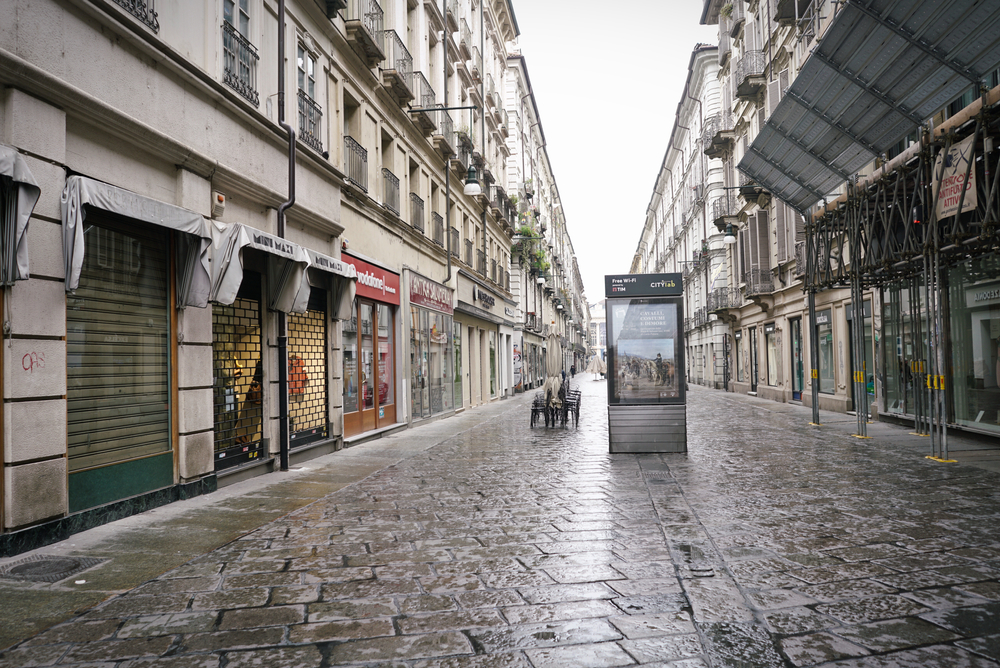 Austerity and an anti-immigrant blockade left Italy with an older population and underfunded health care. Could the same happen here?
By Conn Hallinan | March 25, 2020

As the viral blitzkrieg rolls across one European border after another, it seems to have a particular enmity for Italy. The country’s death toll has passed China’s, and scenes from its hospitals look like something out of Dante’s imagination.

Italy has the fourth largest economy in the European Union, and in terms of health care, it is certainly in a better place than the United States. Per capita, Italy has more hospital beds — so-called “surge capacity” — and more doctors and more ventilators. Italians have a longer life expectancy than Americans, not to mention British, French, Germans, Swedes, and Finns. The virus has had an especially fatal impact on northern Italy, the country’s richest region.

There are a number of reasons why Italy has been so hard-hit, but a major one can be placed at the feet of former Interior Minister Matteo Salvini of the xenophobic, right-wing League Party and his allies on the Italian right, including former prime minister Silvio Berlusconi.

Italy has the oldest population in Europe, and one of the oldest in the world. It did not get that way by accident.

Right-wing parties have long targeted immigrants, even though Italy’s immigrant population — a little over 600,000 — is not large by international standards. Calling immigrants a “threat to European values” has been the rallying cry for the right in France, Germany, Hungry, Poland, Greece, Spain, the Netherlands, and Britain as well.

In the last Italian election, the League and its then ally, the Five Star Movement, built their campaigns around resisting immigration. Anti-immigrant parties also did well in Spain, and certainly played a major role in pulling the United Kingdom out of the EU.

Resistance to immigration plays a major role in “graying” the population. Italy has one of the lowest birthrates in the world, surpassing only Japan. The demographic effects of this are “an apocalypse,” according to former Italian Health Minister Beatrice Lorenzin. “In five years,” she continued, “we have lost more than 66,000 births” per year — more than the population of the city of Siena. “If we link this to this increasingly old and chronically ill people, we have a picture of a moribund country.”

According to the World Health Organization, the ideal birth-death replacement ratio in advanced countries is 2.1. Italy’s is 1.32., which means not only an older population, but also fewer working age people to pay the taxes that fund the social infrastructure, including health care.

As long as there is no major health crisis, countries muddle though. But when something like the coronavirus arrives, it exposes the underlying weaknesses of the system.

Some 60 percent of Italians are over 40, and 23 percent are over 65. It is demographics like these that make Covid-19 so lethal.

From age 10 to 39, the virus has a death rate of 0.2 percent, more deadly than influenza, but not overly so. But starting at age 40, the death rate starts to rise, reaching 8 percent for adults aged 70 to 79, and then jumping to 14.8 percent over 80. The average age of coronavirus deaths in Italy is 81.

In addition to its graying population, today Italy is being haunted by the years of austerity that followed the global recession a decade ago.

When the economic meltdown hit Europe in 2008, the European Union responded by instituting painful austerity measures that targeted things like health care. Over the past 10 years, Italy has cut some 37 billion euros from its health system. The infrastructure that could have dealt with a health crisis like Covid-19 was hollowed out, so that when the disease hit, there simply weren’t enough resources to resist it.

Add to that the age of Italians, and the outcome was almost foreordained.

The issues in Italy’s 2018 election were pretty straightforward: slow growth, high youth unemployment, a starving education system, and a deteriorating infrastructure — Rome was almost literally drowning in garbage. But instead of the failed austerity strategy of the EU, the main election theme became immigration, a subject that had nothing to do with Italy’s economic crisis, troubled banking sector, or burdensome national debt.

Berlusconi, leader of the right-wing Forza Italia Party, said “All these immigrants live off of trickery and crime.” Forza made common cause with the fascist Brothers of Italy, whose leader, Giorgia Meloni, called for halting immigrants with a “naval blockade.”

The main voice of the xenophobic campaign, however, was Salvini and the League. Immigrants, he said, bring “chaos, anger, drug dealing, thefts, rape, and violence,” and pose a threat to the “white race.”

Five Star Movement leader Luigi Di Mario joined the immigrant bashing, if not with quite the vitriol of Berlusconi, Salvini, and Meloni. The center-left Democratic Party ducked the issue, leaving the field to the right.

The outcome was predictable: the Democratic Party was routed and the Five Star Movement and League swept into power. Salvini took the post of Interior Minister and actually instituted a naval blockade, a violation of international law and the 1982 Law of the Sea.

Eventually the League and Five Star had a falling out, and Salvini was ousted from his post, but the damage was done. The desperately needed repairs to infrastructure and investments in health care were shelved. When Covid-19 stuck, Italy was unprepared.

Much the same can be said for the rest of Europe, where more than a decade of austerity policies have weakened health care systems all over the continent.

Nor is Italy facing a demographic catastrophe alone. The EU-wide replacement ratio is a tepid 1.58, with only France and Ireland approaching — but not reaching — 2.1.

If Germany does not increase the number of migrants it takes, the population will decline from 81 million to 67 million by 2060, reducing the workforce to 54 percent of the population — not enough to keep up with current levels of social spending. The Berlin Institute for Population and Development estimates that Germany will need 500,000 immigrants a year for the next 35 years to keep pensions and social services at current levels.

Spain — which saw the right-wing anti-immigration party do well in the last election — is bleeding population, particularly in small towns, some 1,500 of which have been abandoned. Spain has weathered a decade and a half of austerity, which damaged the country’s health care infrastructure. After Italy, Spain is the European country hardest hit by Covid-19.

As populations age, immigrants become a necessity. Not only is new blood needed to fill in the work needs of economies, broadening the tax base that pays for infrastructure, but, old people also need caretaking, as the Japanese have found out. After centuries of xenophobic policies that made immigration to Japan almost impossible, the Japanese have been forced to accept large numbers of migrants to staff senior facilities.

The United States will face a similar crisis if the Trump administration is successful in choking off immigration. While the U.S. replacement ratio is higher than the EU’s, it still falls under 2.1, and that will have serious demographic consequences in the long run.

It may be that a for-profit health system like the U.S. model simply can’t cope with a pandemic because it finds maintaining adequate surge capacity in hospital beds, ventilators, and staff reduces stockholders’ dividends. And public health care systems in Europe — which have better outcomes than the American system’s — only work if they are well funded.

To the biblical four horsemen — war, famine, wild beasts, and plague — we can add two more: profits and austerity.