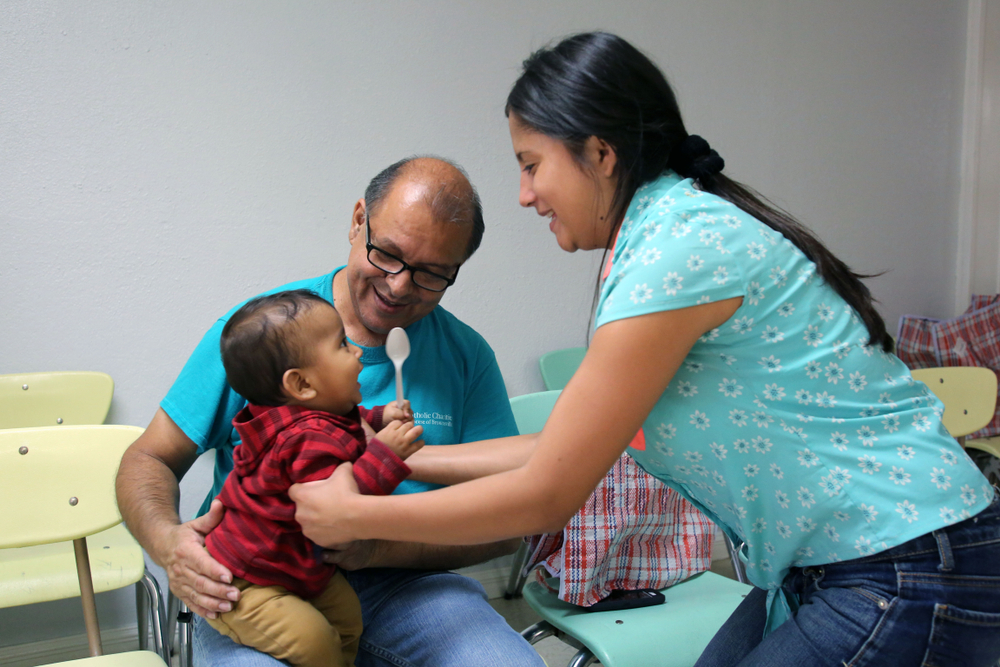 A volunteer at a Catholic Charities Humanitarian Respite Center in McCallen Texas smiles at a Central American refugee and her child. (2017 / Shutterstock)

If Impoverished Countries Can Host Millions of Refugees, the U.S. Can Welcome a Few Thousand

The factors that drive displacement are often complex, but welcoming refugees isn't.
By Phyllis Bennis | April 7, 2021

Thousands of desperate migrants, mostly from Central America, are stuck at the U.S.-Mexico border. Most are families and unaccompanied children.

Despite their legal rights to apply for asylum, U.S. officials are turning away huge numbers, claiming pandemic restrictions. But thousands of children remain, held in crowded border detention facilities while awaiting transfer to Department of Health and Human Services facilities that are full to bursting.

The situation is terrible for those children and their families. But dealing with it isn’t rocket science: The government should authorize emergency spending to expand and build new facilities and hire social workers, health care providers, and teachers to care for these kids — along with an expanded team of family reunion workers.

Here in the wealthiest country on earth, we should know how to care for influxes of desperate people. Just ask the teams who welcomed, cared for, and arranged placement for 131,000 Vietnamese refugees in the U.S. in 1975. All that’s missing now is political will.

When you look at the global picture, the situation on our border starts to look much more manageable. So let’s clear up a few things.

1. There is a massive displacement crisis all over the world.

Globally, more than 80 million people, including 34 million children, have been forced from their homes because of war, violence, economic collapse, or climate disasters. Among these, 26 million are refugees, forced out of their country. Another 4 million are seeking asylum.

More than two-thirds of refugees come from just five countries — Afghanistan, Syria, Myanmar, Venezuela, and South Sudan — none of which are in Central America. These refugees have mostly sought safety in nearby countries. Millions of Syrians fled to Turkey. Venezuelans poured into Colombia. Afghans escaped war in Pakistan, and South Sudanese in Uganda. Myanmar’s Rohingya fled to Bangladesh.

Among the world’s top refugee hosts, the United States isn’t even close. In Lebanon, a tiny country facing a massive economic crisis, one of every five people is a refugee —  the equivalent of the United States taking in 66 million. Yet under the last administration, we admitted just a few thousand each year — a record low.

3. Allowing refugees to apply for asylum isn’t just a nice thing to do — it’s the law.

When the United States signed the 1951 Convention on the Status of Refugees, it committed itself under international law to protect refugees. According to the United Nations refugee agency, the Convention’s “core principle is non-refoulement, which asserts that a refugee should not be returned to a country where they face serious threats to their life or freedom.”

That means that a desperate Honduran family showing up at the U.S. border seeking refuge from violence, hurricanes, or extreme poverty cannot legally be either returned to Honduras or sent to “wait in Mexico” for a U.S. court date, since either choice means facing those serious threats.

It’s U.S. domestic law too — specifically the Refugee Act of 1980. Neither law lets governments avoid their obligations because of the pandemic — in fact, the Refugee Act describes specific U.S. obligations to provide medical care to potential refugees. Today that should mean providing vaccines and testing, ensuring social distancing and masks, and avoiding the super-spreader environment of crowded detention facilities.

4. No one chooses to lose their home.

No one decides to leave their home on a lark, or just because someone said President Biden will treat them better than Trump.

A great many of these “push factors” have been accelerated by Washington’s own wars, trade policies, sanctions, arms exports, and carbon emissions. President Biden can keep telling refugees “don’t come,” and that someday the U.S. will let people apply for asylum from their own country, but that won’t stop them if their house was destroyed, their children are hungry, or their lives are at risk.

The real crisis isn’t the temporary chaos on our border. It’s the hunger, violence, and climate catastrophes forcing people to leave their homes in the first place.

If impoverished countries can host millions of refugees, certainly the U.S. – the richest country in the world – can welcome a few thousand Central American children and their families.

Common decency — and the law — demands it.