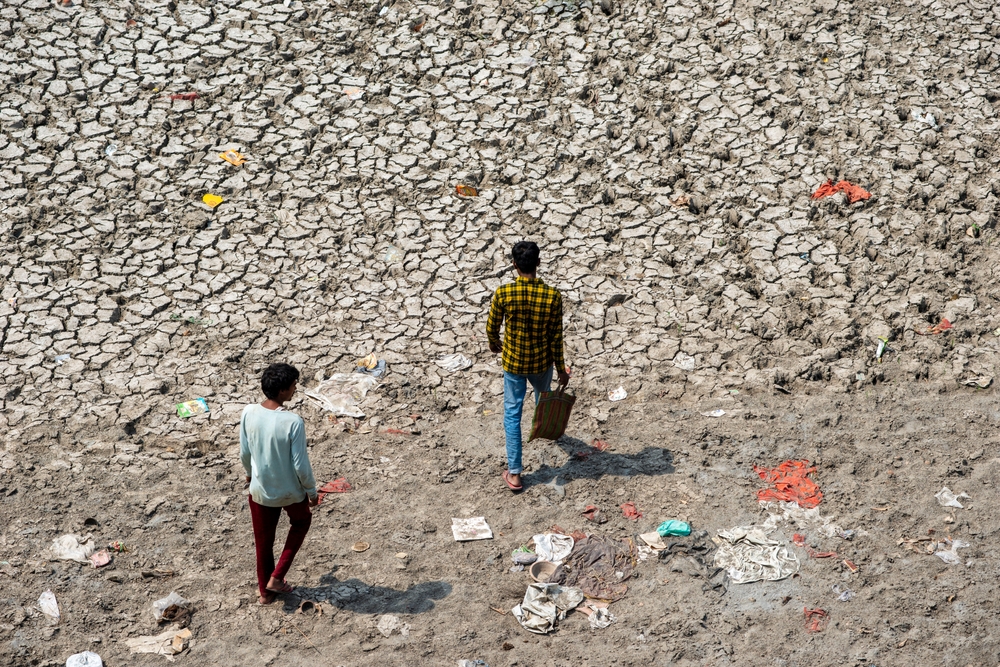 Two boys walk across a dried riverbed in New Delhi, India in May 2022. (Shutterstock)

India and Pakistan Are Baking, and Every Powerful Institution Is to Blame

Indians know they can’t rely on elites to save them from catastrophe. That’s exactly what could make a climate movement there so powerful.
By Basav Sen | May 11, 2022

Large parts of my ancestral homeland of India and neighboring Pakistan are facing a severe heatwave, with temperatures soaring to 111 degrees Fahrenheit—far above normal.

It’s still spring in South Asia. Peak summer temperatures usually occur in late May or early June, before the advent of the monsoon rains. So there may be worse in store this year — and much worse in the near future.

The Intergovernmental Panel on Climate Change (IPCC) identifies South Asia as one of the ​“global hotspots of high human vulnerability” for catastrophic climate change impacts such as heatwaves, floods, and droughts — and the resulting loss of life, infrastructure damage and food insecurity

South Asia is home to nearly a quarter of the world’s people — and about 29% of all people living in extreme poverty. Already it has about 81 million malnourished children, and along with a number of African countries, has some of the lowest rates of access to clean drinking water worldwide. The ​“cooling gap” in the region (defined as the share of the population who need space cooling for optimum health and safety and don’t have access to it) is the highest in the world, at 92%.

In a world where people mattered, threats of this magnitude in a region that’s home to one out of four people in the world would be rightly perceived as a threat to the whole world. It would be taken seriously by every institution with the power to do something about it.

We don’t yet live in such a world. We still need to create it.

Hate in the Time of Heatwaves

Instead of addressing the root causes of the severe climatic threats to its own people, Prime Minister Narendra Modi’s government, ruling party and allies are focused on stirring up ethno-religious hate, raising the possibility of imminent genocide. In a few short years, the fascist Bharatiya Janata Party (BJP) has taken the world’s most populous nominal democracy down a very dangerous road.

The full story of India’s lurch towards fascism is too long to recount in its entirety, but here are a few horrifying examples.

In the state of Assam, the Indian government has stripped Muslims and transgender people of their citizenship and put them in concentration camps. Nationally, it has passed a law explicitly denying Muslim migrants the right to citizenship by naturalization. Meanwhile, the national government and BJP-led state governments have looked the other way as extremists with ties to the ruling party have attacked Muslim and Christian houses of worship, and openly called for genocide.

Other targets of violence and repression in India include Dalits (Hindus who are lowest in the caste hierarchy) — particularly Dalit women and girls, who are routinely targeted for horrific sexual violence by upper-caste Hindu perpetrators, often with complete impunity.

They also include activists for social and economic justice, and journalists exposing human rights abuses. In one particularly disturbing case, several respected scholars and activists have been charged with sedition. There are growing indications that the evidence against them was manufactured using the Pegasus spyware developed by an Israeli firm and used by authoritarian governments the world over.

Significantly, the targets for repression also include Indigenous land defenders and youth climate activists, charged with sedition for daring to question the extractivism of the Indian state.

And here, it turns out that the fascism of the Indian state and its extractivism are closely related.

The Modi government in India backs an extractivist energy model that expands coal production at the expense of land rights of Adivasi, or Indigenous, peoples in India. The beneficiaries of this extractivist model are large corporations such as the Adani Group, which has very close political ties to the Modi government.

As climate change intensifies and global opinion has turned against fossil fuels, industry groups like these have shown little compunction about backing outright fascists who support their agenda — and India, like the United States, is no exception.

Washington Looks the Other Way

Here in the United States, we also need to focus on our outsized role in creating the global climate crisis that is disproportionately threatening South Asia — as well as in aiding and abetting fascism in India.

Far from expressing even the most mild and symbolic disapproval of gross human rights violations in India, Biden issued a joint statement with Modi committing the two countries to ​“strengthening democratic values and institutions.” That statement even ignored the U.S. government’s own Commission on International Religious Freedom, which has warned about the severe threat to religious freedom in India.

Modi’s visit to the White House could have been a meaningless diplomatic formality. But, more likely, it reflects a cynical U.S. calculation to look the other way as the country slides into open fascism and genocide, preferring instead to secure the country’s cooperation against China and advance the economic interests of multinational corporations.

As the world’s largest cumulative greenhouse gas emitter and one of the largest per capita emitters, the United States is also directly culpable for the current heatwave in South Asia, among other severe climate change impacts. Despite the Biden administration’s rhetoric to the contrary, the United States is showing no evidence of slowing down its emissions.

The United States is the world’s largest producer of oil and gas, and the Biden administration is adding fuel to the fire by continuing the reckless giveaway of public lands for oil and gas drilling (and would have given away public waters too, but the courts didn’t let them get away with it). The administration is also using the Ukraine war as an excuse to plan a massive buildout of gas export infrastructure, in a pattern of actions that don’t match its rhetoric.

For all its platitudes about ​“listening to science,” the U.S. government is ignoring the dire warnings of the IPCC, the International Energy Agency, and U.N. Secretary-General António Guterres.

Speaking of which, what about the United Nations? Shouldn’t it be hard at work trying to avert global catastrophe? To some extent, the United Nations is doing its job, promoting renewable energy and issuing urgent scientific analyses about the need to transition away from fossil fuels.

But it’s also institutionally constrained by what powerful member states allow it to do. The role of the Saudi Arabian government — the world’s second largest oil producer—in undermining the language on fossil fuel phaseout in the most recent IPCC report provides a striking example of how powerful and wealthy countries have stymied international climate action.

Large numbers of people in India know they can’t rely on elites to save them from catastrophe. But none of this means there’s nothing that can be done.

After all, this is a country where the largest protest movement in world history engaged in an epic, one-year fight against farm procurement legislation that would have harmed farmers’ livelihoods for the benefit of corporate agribusiness. In November 2021, the movement forced the government to back down and withdraw the bills. This wasn’t a one-time anomaly either — it comes out of a rich history of grassroots struggle by the most marginalized communities in India.

Our role in the United States is to follow the leadership of movements in South Asia in their fight against both government repression and a global economic and political system that prioritizes fossil fuel profits over their lives.

As climate change worsens and world governments continue business as usual, there will inevitably be massive resistance movements in South Asia and elsewhere in the Global South. Those of us in the North owe them our solidarity.

This article was jointly produced by Foreign Policy In Focus and In These Times Magazine.