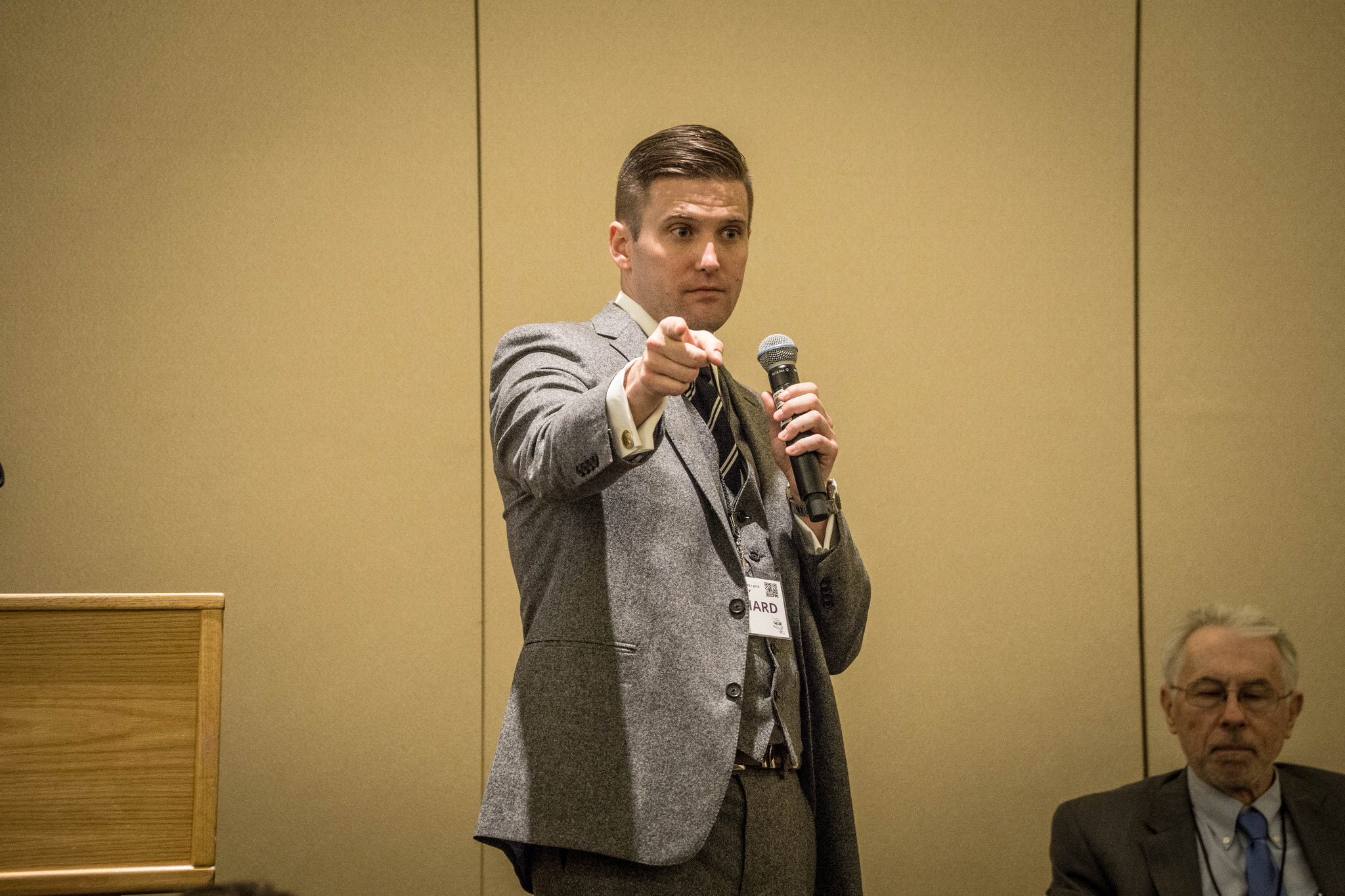 A famously anti-Semitic movement has come to admire modern Israel's "ethnonationalism." That speaks volumes about the ascent of the far right in the country.
By Harry Blain | February 6, 2018

Much of the “alt-right” literature in the United States is exactly what you would expect.

Images of George Soros using his “globalist” tentacles to smite his political enemies. Thought pieces on a “white genocide” so devious that barely any white people have noticed it. Reflections on the “Islamification” of Europe.

However, there are some surprises.

Chief among them is the fact that Richard Spencer, one of the leading faces of the movement — who led a Nazi-style salute to Donald Trump before a crowd of close-shaven, rapturous followers — expresses great admiration for the one state in the world that calls itself Jewish. Other leading “alt-right” partisans, such as Milo Yiannopoulos and Steve Bannon, hold a similar view.

When Richard Spencer is asked about his preferred label, he sidelines “white supremacist” in favor of “identitarian” — a term evoking flag waving and petitions rather than burning torches.

Like earlier proponents of an edgy yet “respectable” white supremacy, Spencer carefully dodges awkward questions about Hitler, Jews, and the Holocaust. Instead, he stays firmly on his own message: Multiculturalism has failed, civic nationalism is a sham, and the best solution for everyone is to live within self-contained, ethnically homogenous states.

It is here that Spencer finds a model in the state of Israel.

“You could say I am a white Zionist,” he told Israel’s Channel 2 news in August 2017. He later described the Jewish state as “the most important and perhaps most revolutionary ethno-state” — the “one that I turn to for guidance.”

Many defenders of Israel reject the term “ethno-state” — pointing, for instance, to the spirit of equality enshrined in the country’s Declaration of Independence, and the right of its Arab citizens to vote and run for public office. There is also an academic debate on this question, split between those who describe Israel as an “ethnocracy” and, more sympathetically, as an “ethnic democracy.”

But, to find an answer, we only need to ask the people who run the country.

There’s the prime minister who described the Arab citizens of Israel as a “demographic threat”; the education minister who settled a cabinet debate by saying “I’ve killed lots of Arabs in my life and there’s no problem with that”; or the justice minister who called Palestinian children “little snakes.”

“It doesn’t matter what the nations of the world say,” the public security minister said at the beginning of 2018. “The time has come to express our biblical right to the land.”

Paranoia over the Israel’s ethno-religious purity has never been confined to the right, either.

“Moderates” like the late Shimon Peres advocated a Palestinian state not out of any commitment to the principle of self-determination, but instead as the only way to ensure that the “demographic shadow” — i.e., Palestinians inside Israel proper — would “disappear.”

Before the two-state idea, the early leaders of Israel’s left-of-center Labor Party did things like reward Jewish “heroine mothers” who had more than ten children, and drafted “Absentee Property Laws” to make sure expelled Palestinians could never return to their homes.

It’s worth underlining the fact that when Israeli leaders talk about a “demographic threat” — otherwise known as the birth of a Palestinian — they are often referring to fellow Israeli citizens: the 1.6 million Arabs who live within Israel’s 1948 borders and make up 20 percent of its population.

What is their future within the Jewish State? Today, Israeli leaders give answers that Richard Spencer would be proud of.

Spencer and other American white nationalists always squirm when pressed on exactly how they plan to achieve their political vision for the United States. They are comfortable enough talking about limiting non-European immigration to stop what they call the “Third World invasion,” but they cannot escape the fact that around one in four Americans are not white. What’s to be done with them?

The vaguely sinister solution is something they term “peaceful ethnic separation” — an idea that has its roots in population “exchanges,” such as between Greece and Turkey in 1923, and more one-sided “transfers” like the expulsion of Germans from Central and Eastern Europe after the Second World War.

“Transfer is not a dirty word,” the proud Zionist “intellectual” Ben Shapiro declared in 2003. Warning that “without drastic measures, the Arab dream will come true,” Shapiro reassured his readers that “expelling a hostile population is a commonly used and generally effective way of preventing violent entanglements.”

Citing events in Central and Eastern Europe after World War II, Shapiro concluded that “if Germans, who had a centuries-old connection to the newly created Polish territory, could be expelled, then surely Palestinians, whose claim to Judea, Samaria, and Gaza is dubious at best, can be expelled.”

Israel’s defense minister agrees. “There are many historical precedents for land and population swaps, and for the alteration of borders that enabled the creation of homogeneous states and the end of internal conflicts,” he said in 2015. Israeli Prime Minister Benjamin Netanyahu, while avoiding his colleagues’ often bellicose language, has already flirted with such proposals, including by drawing up plans to “transfer” some Israeli Arabs into the West Bank and strip them of their citizenship.

Two points should be added here.

First, popular support for the most extreme form of “transfer” — outright expulsion — is widespread in Israel, often polling close to 50 percent among Jewish Israelis. Second, a similarly high proportion of Israeli Arabs not only don’t want to leave Israel, but refer to themselves as “proud citizens.”

Thus, a large number of Israelis — and their leaders — want the Arabs to leave, and don’t care whether it’s voluntary or forced. They say as much openly and repeatedly. No wonder the American advocates of “White Zionism” are so impressed.

As Israeli politics and society continues its slide to the right, it will continue to find admirers like Richard Spencer. Aspiring “strong men” like Donald Trump will continue to flatter Israel’s “tough-on-terrorism” politicians. Maybe Israeli flags will continue, somewhat surreally, to fly in the Protestant neighborhoods of Belfast.

But Israel’s mask has slipped. Its leaders used to disguise their nastier solutions to the “Arab problem.” Now they boast about them. They used to indulge the high rhetoric of liberal democracy. Now they hardly bother. They used to baulk at the “ethno-state” label. Now they embrace it.

What kinds of friends will this attract?

More Trumps, more Spencers, and whoever else emerges from the shadows of the far right across the world. A bleak picture for the self-proclaimed “sole democracy in the Middle East.”