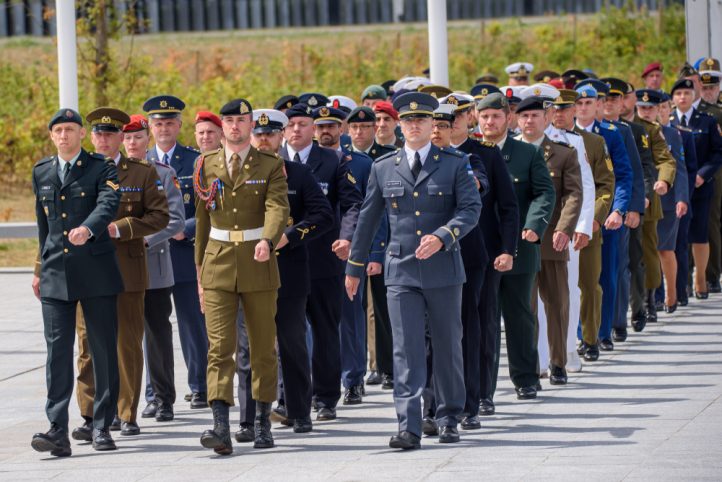 Opening ceremonies at the 2018 NATO summit in Brussels (Shutterstock)

The outcome of the July 11-12 NATO meeting in Brussels got lost amid the media’s obsession with President Donald Trump’s bombast, but the “Summit Declaration” makes for sober reading. The media reported that the 28-page document “upgraded military readiness,” and was “harshly critical of Russia,” but there wasn’t much detail beyond that.

But details matter, because that’s where the devil hides.

One such detail is NATO’s “Readiness Initiative” that will beef up naval, air, and ground forces in “the eastern portion of the Alliance.” NATO is moving to base troops in Latvia, Estonia, Lithuania, the Czech Republic, and Poland. Since Georgia and Ukraine have been invited to join the Alliance, some of those forces could end up deployed on Moscow’s western and southern borders.

And that should give us pause.

A recent European Leadership’s Network’s (ELN) study titled “Envisioning a Russia-NATO Conflict” concludes, “The current Russia-NATO deterrence relationship is unstable and dangerously so.” The ELN is an independent think tank of military, diplomatic, and political leaders that fosters “collaborative” solutions to defense and security issues.

High on the study’s list of dangers is “inadvertent conflict,” which ELN concludes “may be the most likely scenario for a breakout” of hostilities. “The close proximity of Russian and NATO forces” is a major concern, argues the study, “but also the fact that Russia and NATO have been adapting their military postures towards early reaction, thus making rapid escalation more likely to happen.”

With armed forces nose-to-nose, “a passage from crisis to conflict might be sparked by the actions of regional commanders or military commanders at local levels or come as a consequence of an unexpected incident or accident.” According to the European Leadership Council, there have been more than 60 such incidents in the last year.

Which Side Is Advancing?

The NATO document is, indeed, hard on Russia, which it blasts for the “illegal and illegitimate annexation of Crimea,” its “provocative military activities, including near NATO borders,” and its “significant investments in the modernization of its strategic [nuclear] forces.”

Unpacking all that requires a little history, which isn’t the media’s strong suit.

The story goes back more than three decades to the fall of the Berlin Wall and eventual re-unification of Germany. At the time, the Soviet Union had some 380,000 troops in what was then the German Democratic Republic, or East Germany. Those forces were there as part of the treaty ending World War II, and the Soviets were concerned that removing them could end up threatening the USSR’s borders. The Russians have been invaded — at terrible cost — three times in a little more than a century.

So in the early 1990s, West German Chancellor Helmut Kohl, U.S. Secretary of State James Baker, and Soviet Premier Mikhail Gorbachev cut a deal. The Soviets agreed to withdraw troops from Eastern Europe as long as NATO didn’t fill the vacuum, or recruit members of the Soviet-dominated Warsaw Pact. Baker promised Gorbachev that NATO would not move “one inch east.”

The agreement was never written down, but it was followed in practice. NATO stayed west of the Oder and Neisse rivers separating Germany and Poland, and Soviet troops returned to Russia. The Warsaw Pact was dissolved in 1991.

But President Bill Clinton blew that all up in 1999, when the U.S. and NATO intervened in the civil war between Serbs and Albanians over the Serbian province of Kosovo. Behind the new American doctrine of “responsibility to protect,” NATO opened a massive 11-week bombing campaign against Serbia.

From Moscow’s point of view, the war was unnecessary. The Serbs were willing to withdraw their troops and restore Kosovo’s autonomous status. But NATO demanded a large occupation force that would be immune from Serbian law, something the nationalist-minded Serbs would never agree to. It was virtually the same provocative language the Austrian-Hungarian Empire had presented to the Serbs in 1914, language that set off World War I.

In the end, NATO lopped off part of Serbia to create Kosovo and re-drew the post World War II map of Europe, exactly what the Alliance charges today that Russia has done with its seizure of the Crimea.

But NATO didn’t stop there. In 1999, the Alliance recruited former Warsaw Pact members Hungary, Poland, and the Czech Republic, adding Bulgaria and Romania four years later. By the end of 2004, Moscow was confronted with NATO in Latvia, Lithuania, and Estonia to the north, Poland to the west, and Bulgaria and Turkey to the south. Since then, the Alliance has added Slovakia, Slovenia, Albania, Croatia, and Montenegro. It has invited Georgia, Ukraine, Macedonia, and Bosnia and Herzegovina to apply as well.

When the NATO document chastises Russia for “provocative” military activities near the NATO border, it is referring to maneuvers within Russia’s own borders, or one of its few allies, Belarus.

As author and foreign policy analyst Anatol Lieven points out, “Even a child” can look at a 1988 map of Europe and see “which side has advanced in which direction.”

NATO also accuses Russia of “continuing a military buildup in Crimea,” without a hint that those actions might be in response to what the Alliance document calls its “substantial increase in NATO’s presence and maritime activity in the Black Sea.” Russia’s largest naval port on the Black Sea is Sevastopol in the Crimea.

One does not expect even-handedness in such a document, but there are disconnects in this one that are worrisome.

Yes, the Russians are modernizing their nuclear forces, but the Obama administration was first out of that gate in 2009 with its $1.5 trillion program to upgrade the U.S.’s nuclear weapons systems. Both programs are a bad idea.

Some of the document’s language about Russia is aimed at loosening purse strings at home. NATO members agreed to cough up more money, a decision that preceded Trump’s Brussels tantrum on spending.

There is some wishful thinking on Afghanistan — “Our Resolute Support Mission is achieving success” — when in fact things have seldom been worse. There are vague references to the Middle East and North Africa, nothing specific, but a reminder that NATO is no longer confining its mission to what it was supposedly set up to do: Keep the Americans in, the Russians out, and the Germans down.

The Americans are still in — one should take Trump’s threat of withdrawal with a boulder-sized piece of salt — there is no serious evidence the Russians ever planned to come in, and the Germans have been up since they joined NATO in 1955. Indeed, it was the addition of Germany that sparked the formation of the Warsaw Pact.

While Moscow is depicted as an aggressive adversary, NATO surrounds Russia on three sides, has deployed anti-missile systems in Poland, Romania, Spain, Turkey, and the Black Sea, and has a 12 to 1 advantage in military spending. With opposing forces now toe-to-toe, it would not take much to set off a chain reaction that could end in a nuclear exchange.

Yet instead of inviting a dialogue, the document boasts that the Alliance has “suspended all practical civilian and military cooperation between NATO and Russia.”

First, a return to the 1998 military deployment. While it is unlikely that former members of the Warsaw Pact would drop their NATO membership, a withdrawal of non-national troops from NATO members that border Russia would cool things off. Second, the removal of anti-missile systems that should never have been deployed in the first place.

In turn, Russia could remove the middle-range Iskander missiles NATO is complaining about and agree to talks aimed at reducing nuclear stockpiles.

But long range, it’s finally time to re-think alliances. NATO was a child of the Cold War, when the West believed that the Soviets were a threat. But Russia today is not the Soviet Union, and there’s no way Moscow would be stupid enough to attack a superior military force.

The old ways of thinking are not only outdated, but also dangerous. It’s time NATO went the way of the Warsaw Pact.

Foreign Policy In Focus Conn Hallinan can be read at dispatchesfromtheedgeblog.wordpress.com and middleempireseries,wordpress.com.