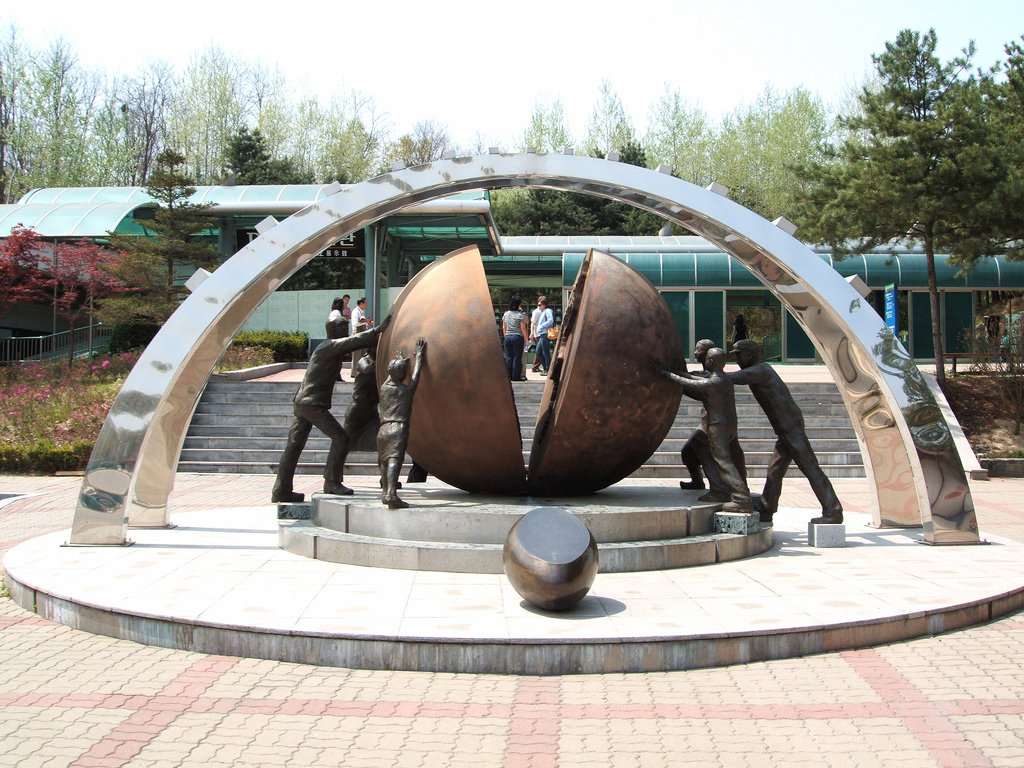 As the Olympic games in Rio draw to a close, another set of games will begin: military exercises between the United States and South Korea to prepare for a possible armed conflict with North Korea.
By Christine Ahn | August 22, 2016

The contrast between the two games couldn’t be starker. On the one hand, the world’s most technologically advanced militaries and weapons systems are deployed to practice combat. On the other, despite tremendous nationalist pressure to beat the other, athletes from North Korea and South Korea competed with each other peacefully, even gracefully, in the 2016 Olympic games.

Among the most touching moments from Rio was when two gymnasts, Lee Eun-Ju from South Korea and Hong Un-Jong from North, posed for a selfie with Eun-Ju holding up a peace sign. The photograph went viral, particularly in South Korea where the 17-year old Eun-Ju became a celebrity diplomat. Her gesture— to walk over to Hong, a fellow Korean but from a nation considered to be an enemy of her own—captured that Olympic spirit where humans are able to triumph over fear and pain to move the world forward.

And it wasn’t just a female thing, either.

A few days later, Kim Song-Guk, a North Korean athlete, won bronze at the men’s 50-meter pistol shooting competition. Instead of expressing remorse for coming in behind gold winner Jin Jong Oh from South Korea, Song-Guk reflected, “If the two [Koreas] become one, we could have a bigger medal.”

Overnight, South Korean social media went wild over Song-Guk’s heartfelt wishes for Korean reunification. In a few hours, the video had 2.2 million views and 160,000 likes, including comments like, “Even though you got a Bronze medal, your words deserve a gold medal.”

“We mingle and say hello with athletes from other countries, so why can’t we do that?” Eun-Ju innocently asked.

North and South Korean athletes cannot communicate directly with one another because the two countries are officially still at war. It is illegal under both countries’ national security laws for civilians to interact without government permission.

The Korean War, which lasted from 1950 to 1953, ended with a ceasefire, but not a permanent peace accord. Although military leaders from the United States, People’s Republic of China, and Democratic People’s Republic of Korea promised within three months to replace the Armistice Agreement with a peace treaty, 63 years later they have yet to deliver.

As a result, the Korean people—like these Olympic athletes—have been separated by the world’s most militarized border, unable to see, know, and understand one another for three generations.

Not only have relations completely hardened between the two Koreas, the unresolved Korean conflict is driving a new arms race in an already highly militarized region, particularly straining relations between Washington and Beijing.

In July, South Korea announced that to protect against the threat of North Korean missiles, it would deploy the U.S.’ Terminal High Altitude Aerial Defense (THAAD) in Seongju, a farming region 180 miles south of Seoul. Angry South Korean citizens protested the announcement by hurling eggs and water bottles at their prime minister and staging massive protests.

Equally vocal over their opposition to the U.S. missile defense system is Beijing, which has asked Seoul to “think twice” about this decision and has begun to chill relations between the two countries. In a statement, China’s foreign ministry said the THAAD deployment “doesn’t help achieve the objective of denuclearization in the peninsula, doesn’t benefit maintaining peace and stability in the peninsula. It’s going toward the opposite direction of solving the problem via dialogue and negotiation.”

Against this tense backdrop, the U.S-R.O.K. joint military exercises will proceed. The spring war games were the largest ever, involving 315,000 U.S. and South Korean soldiers and nuclear-capable submarines, B-52s, and F-22s. In response to the recent U.S. deployment of B-1 bombers to Guam, North Korea’s foreign ministry issued a statement via the Korean Central News Agency that this “proves that the U.S. plan for a preemptive nuclear strike at the DPRK has entered a reckless phase of implementation.”

Travis Lindsay, researcher of international security at the University of California, San Diego, recently advocated for rethinking the military exercises. “Demobilization and de-escalation isn’t complete, verifiable, and irreversible denuclearization, but it’s a necessary step forward that will make denuclearization an attainable goal.”

In spite of nationalist media coverage, the Korean athletes in Rio showed the world that seemingly intractable divisions imposed by politicians could be transcended by the simplest and most sincere human interactions.

Instead of continuing to engage in saber-rattling actions that only lead to more provocation and dangerous military escalation, American and Korean leaders should shift their policies to reflect the desires of the Korean people for peaceful co-existence. Not only have Olympians shown their ability to conquer the insurmountable through their super human ability, they have inspired all of us by engaging in ordinary human actions.

It was only 16 years ago during the 2000 Olympics that Korean athletes walked together during the opening ceremony in Sydney carrying a blue One Korea flag. When asked why, Chang Ung, the North Korean delegate explained, “We are the same blood.”

Christine Ahn is the Executive Director of Women Cross DMZ, a global movement of women walking to end the Korean War, reunite families, and ensure women’s leadership in peacebuilding.