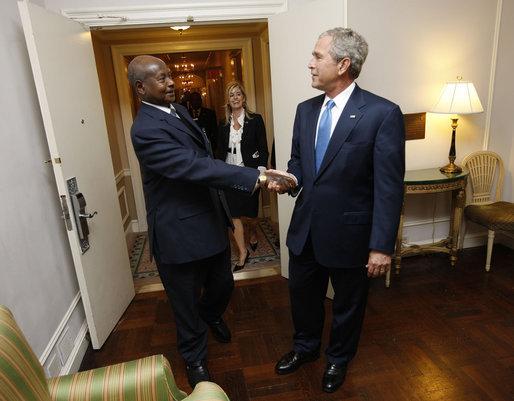 The Pentagon has some unusual bedfellows in its operation in Uganda.
By Caleb Rossiter | June 9, 2010 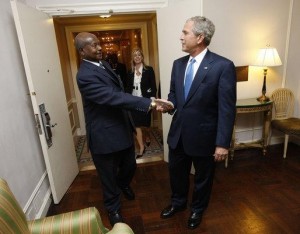 Human rights activists in the world’s most powerful country report that a mystical African is forcing children into his army and killing women who encourage men to leave it. They call his rebellion bizarre and inexplicable, and demand military intervention. Liberal legislators lay aside their usual criticism of their country’s bullying of Africa for economic and military gain, and support an attack on the madman on humanitarian grounds.

In 1879, the British Empire invaded Zululand, ostensibly in response to the outrage of Victorian ladies at King Cetshwayo’s execution of women who broke his law against marrying men before they had completed military service. In May 2010, Sen. Russ Feingold (D-WI) and Rep. Jim McGovern (D-MA), noted human rights and antiwar advocates, heeded the call of Human Rights Watch and the Enough Project. They convinced Congress to pass a law calling for U.S. military aid to the armed forces of Ugandan dictator, President Yoweri Museveni, to “eliminate the threat” of Acholi leader Joseph Kony and his Lord’s Resistance Army.

Outside powers have often used the need for humanitarian intervention to justify their domination of Africa with. This justification prevailed during the 200 years of uprisings against colonial empires, the 30 years of Cold War conflicts fueled by U.S. and Soviet support for their allied dictators, and finally, the past 20 years of U.S. aid to dictators in return for mineral resources and anti-Islamist cooperation in the “long war” for control of the Middle East.

The Western media frequently portrayed uprisings in Africa as irrational and savage forces, from which women and children needed foreign protection: the Mahdi army that seized Sudan and wiped out Gordon’s garrison in Khartoum in 1884; the Mau Mau uprising that made Kenya ungovernable for the British in the 1950s; the Lumumbist rebels in the Congo whom the CIA’s white mercenaries captured and in some cases lynched in 1964; the Lunda forces who challenged Joseph Mobutu’s rule in Zaire (today’s Democratic Republic of the Congo) in 1977 and 1978, and were driven away with U.S. assistance — virtually every African challenge to colonial rule and post-colonial domination. Typical of the tenor of these portrayals were stories planted in the Western media by the CIA to build support for President Jimmy Carter’s airlift of Belgian and French troops to defend Zaire’s Mobutu in 1978, in which white women were forced to dance naked for their Lunda captors on restaurant tables.

Human rights groups have always been an easy mark for the colonial and neocolonial powers that have dominated Africa. They are purposely apolitical, and so have no cause to engage in the politics of either foreign domination or local actors. The British even used the fervor of human rights activists against the Arab slave trade in the 19th century as an excuse to take over all of East Africa and spread their navy throughout the Indian Ocean.

In the case of Uganda, human rights groups and their liberal supporters in the U.S. Congress are making a similar mistake. Their calls for action in support of human rights are strengthening both Museveni, who has ruled Uganda since his own army of child soldiers placed him in power in 1986, and AFRICOM, the Pentagon command established by former Secretary of Defense Donald Rumsfeld.

The conflict in Uganda is not inexplicable, as Secretary of State Clinton implies when she says, “I just don’t understand why we cannot end this scourge.” And it isn’t true that “the Lord’s Resistance Army has no clear political agenda,” as the Enough Project claims. The conflict is based on ethnic rivalries heightened by the British colonial strategy of encompassing many tribal nations in one country and favoring some over others. This rivalry has been at the core of the struggle for power since Uganda’s independence in 1962. Joseph Kony is aligned with the Acholi and other nations in northern Uganda, who are descended from the Nilotic migration of 500 years ago. They are resisting domination by Museveni’s Ankole and other nations of western and southern Uganda, who are descended from the Bantu migration of about 1,200 AD.

After independence, the Acholi teamed up with then-President Milton Obote and his northern Nilotic tribe, the Langi, to take over the Ugandan army. This led to a rift between Obote and the western and southern nations, in particular the Baganda, Uganda’s largest ethnic group at 15 percent and one of the most centrally organized under their hereditary king, the Kabaka. The British favored the Baganda — by giving them schools, control over their local affairs, and Anglican Protestantism — while directly exploiting the Acholi and leaving their education to French Catholic missionaries.

When Idi Amin seized power from Obote in 1971, he purged the Acholi from the army and carried out massacres in their villages. Obote returned to power in 1980, with the help of neighboring Tanzania and a rebel army dominated by Acholi and Langi. But Museveni in turn defeated him after a five-year war, using a rebel army drawn from the west and south. Museveni immediately began to pay back the Acholi with the same sort of brutality and exclusion from opportunity that they had practiced under Obote. Alice Lakwena, an Acholi religious figure, spurred a poorly equipped rebellion called the Holy Spirit Movement, which Museveni’s army crushed in 1987. Kony, her cousin, armed the rebellion more professionally with help from Museveni’s regional opponents and renamed it the Lord’s Resistance Army.

Not one word of this complex history was uttered on the House floor during the recent debate on the bill to “eliminate” Kony and his rebel army. The nearest allusion to it was actually a dismissal by Rep. Ed Royce (R-CA): “It is fashionable to blame conflict in Africa on poverty and other environmental factors. But sometimes just getting rid of one person does make a big difference.”

Darling of the West

Museveni has been the unlikely darling of the West throughout his 25-year rule, despite transforming his formal one-party state into an informal one, repealing the constitutional barrier to his perpetual re-election, and sponsoring invasions of both Rwanda and the Congo. He is popular with human rights groups because of one of those invasions. In 1994, he hosted Paul Kagame’s Tutsi army before it ended the Hutus’ genocidal rampage in Rwanda — and then engaged in its own before invading the Congo alongside Uganda’s army. Museveni is popular with development groups because he vigorously publicized and addressed the HIV/AIDS crisis. He has even charmed environmental activists with his forceful demand for billions of dollars in compensation for the “climate aggression” of the West’s carbon-spewing growth — a dubious scam, given that Africa endured centuries of droughts long before there were SUVs, and there is little evidence that the one-degree rise in global mean temperature recorded since 1860, whether its source is human emissions or natural fluctuations, has affected Africa at all.

Museveni is also popular with the U.S. government because he rented out 2,600 soldiers for UN and African Union missions to act as what John McCain’s Africa adviser Dr. Peter Pham calls “our proxy,” to protect the paper government in Somalia against its Islamist opponents. Museveni has also allowed 10,000 Ugandan civilian contractors to aid U.S. forces in Iraq.

Museveni rules an ethnically fractured country that faces a global economic structure that keeps Africa weak and poor. He is a complex character who fought for the liberation of his people from the domination the British accorded the Buganda, yet his name, Museveni, means “son of a man of the seventh,” a reference to his father’s service in the 7th battalion of the British King’s African Rifles. He comes from the strongly Catholic background of the southwestern tribes. The Catholic Church aided in his seizure of power, but Museveni is a born-again evangelical Christian with a strong anti-homosexual stance.

Kony too is a complex figure. He rose to prominence by leading a rebellion on behalf of his people, just as Museveni did. His tactics are monstrous, but they are not unprecedented in Ugandan conflicts, and certainly not in recent European and American attempts to win wars. This war will eventually be ended by negotiations, not by the “elimination” of one side or another.

A settlement is as necessary in Uganda today as it was in El Salvador in 1990 or East Timor in 1999. In 1990, Jim McGovern was working for former Rep. Joe Moakley (D-MA) and served as the staff leader of the congressional taskforce that proved the U.S.-funded Salvadoran army had murdered Jesuit priests, leading to a congressional cut in military aid and a rapid peace settlement. In 1999, meanwhile, Feingold helped push Indonesia to the bargaining table over East Timor. Indeed, McGovern and Feingold appear to understand that despite its appalling human rights record, even the Taliban must be a partner in a negotiated settlement in Afghanistan. They are the lead sponsors of a bill pushing for an early exit of U.S. troops there, which may well be voted on in the coming weeks. So why are they giving Museveni a free pass for continued rule that they rightly denied to these other repressive regimes?

Empowering AFRICOM to help Museveni fight on, rather than seek a settlement with opposition groups and rebel forces, will only lead to a longer war. AFRICOM made its preference for military solutions to African conflicts clear when it aided Museveni’s army in its pursuit of Kony’s forces in the Congo in 2008, which resulted in the massacres of over 1,000 villagers who got in the way of the rebels’ retreat. This devastation happened again this spring, when the Lord’s Resistance Army retreated through the Central African Republic.

It wasn’t clear which of these two disasters Clinton was referring to at a hearing before the Senate Foreign Relations Committee this year when, laughing and embarrassed, she said of U.S. aid to Uganda’s pursuit of the Lord’s Resistance Army: “We tried that once, very unfortunately not to the result we were seeking.” Incredibly, AFRICOM adopted this strategy of kill rather than settle, even after the Pentagon backed the Ethiopian invasion of Somalia in 2006, which led only to greater destruction in that country.

Warrior liberals’ refusal to acknowledge historical grievances in Uganda is part of the general U.S. aversion to examining its enemies’ perspectives in the post-colonial world. We never accepted the legitimacy of the Vietnamese independence movement, from 1945 until its victory in 1975, seeing it as a Soviet plot to take over Asia. Al-Qaeda openly declares that it is attacking the United States as the “far enemy” for backing its primary enemies, the dictators in Egypt and Saudi Arabia. But American politicians and media present al-Qaeda as a collection of medieval murderers who, as President Bush told a cheering Congress, “hate us because of our freedoms.” Such fairytales of good and evil obscure the true nature of conflicts. People concerned about Uganda’s future need to learn the complex real story, and push for negotiations, not “elimination.”

Caleb RossiterForeign Policy In Focus contributor Caleb Rossiter teaches African politics at American University and is an associate fellow of the Institute for Policy Studies. Formerly a congressional staffer and director of an advocacy group, he is the author of three books on U.S. policy toward the formerly colonized countries. His latest book, The Turkey and the Eagle: The Struggle for America's Global Role, will be published this fall by Algora.