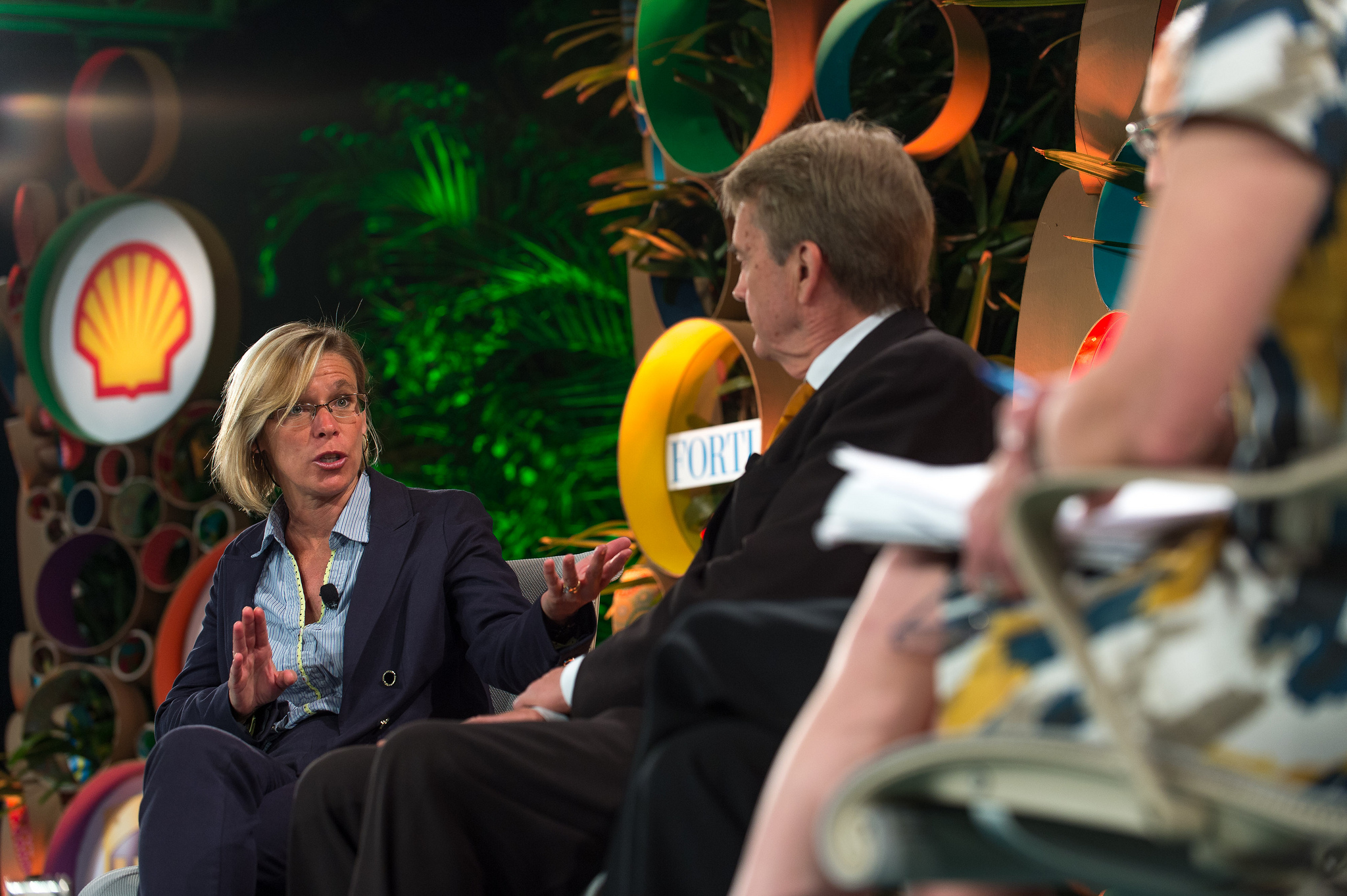 What’s been forgotten in the herculean effort to make the People's Climate March the biggest environmental mobilization ever is what global leaders are doing in town in the first place: namely, meeting with polluters to talk about climate change. (Photo: Fortune Live Media / Flickr)

While We March for the Climate, Governments Meet with Polluters

As climate activists converge on New York, world leaders will meet behind closed doors with corporate honchos who bank on fossil fuels.
By Janet Redman | September 18, 2014

I’m going to guess you’ve heard of the People’s Climate March by now. It’s been all over Facebook, the blogosphere, buses, and subway cars—it’s even shown up on network news, which has been something of a black hole for climate activism.

But in case you’re just getting back from vacation (or a cave), here’s the deal: on Sunday, September 21st, tens of thousands of people are expected to flood the streets of New York City to call on global leaders to take action on climate change.

What’s been somewhat forgotten in the truly herculean effort to make this the biggest climate mobilization ever is what global leaders are doing in town in the first place.

The truth is, they’ve been called to New York by United Nations Secretary General Ban Ki Moon to meet in an unofficial capacity, because formal negotiations for a global treaty to stabilize the climate aren’t going so well.

In fact, little more than a year out from the December 2015 deadline for signing a deal, countries can’t even agree on a fundamental approach to curbing heat-trapping greenhouse emissions.

One option is a binding treaty that mandates a clear target for reducing overall emissions and assigns each country a fair share of the work. The second option is a nonbinding “pledge and review” process by which each nation records what pollution cuts it thinks it can make. According to this plan, we’d add up those pledges, hope they’re enough to avoid climate chaos, and come back in a few years to see how governments have done.

The United States is the primary proponent of the latter option, for the record.

But emissions cuts are not the only hang-up.

If there’s frighteningly little political will to take common-sense action in the face of devastating ecological disruption—i.e., to stop burning fossil fuels and put clean renewable energy in place as fast as possible—there is even less appetite to pay for it.

At the Copenhagen climate talks in 2009, industrialized countries promised to create a “Green Climate Fund” to channel money to poorer countries to support their shift to clean energy and climate-resilient development. Since the global North made much of its wealth polluting the planet, it seemed only fair that it would pick up part of the tab to help the South grapple with the result.

Rich countries say that in order to muster political support for climate finance, they need to see developing countries going out of their way to earn it. Poor countries wonder how they’re supposed to act first when many of them are on the front lines of climate chaos largely caused by pollution from rich countries.

These debates are nothing new. They’re repeated every year at the UN climate convention.

What’s different about the upcoming New York climate summit is its unofficial nature, which is meant to provide a “neutral” space where heads of state can have a more productive conversation. But by holding the summit outside of official negotiations, the secretary general has set a table where corporations and banks are on equal footing with governments. Literally.

The one-day climate summit will feature a high-level private sector luncheon where businesses will share actions they are taking “to demonstrate leadership on climate change and measures that governments can take to enable the private sector to develop long-term climate change solutions.”

The guest list includes global oil and gas company Royal Dutch Shell, international coal financier Barclays Bank, and South Africa’s power utility Eskom, which is currently building one of the world’s largest coal-fired power plants with funding from the World Bank. They’ll be joined by more than 130 other companies and banks.

That means our leaders aren’t just dithering at the edges while the planet burns—they’re actively inviting the very companies that are causing this crisis to help fix it.

“So what?” you might wonder. “Don’t companies have a role to play?”

Of course they do. But there’s no solution to climate change that doesn’t threaten the bottom line of companies that currently profit from dirty energy. That doesn’t mean that their interests never line up with what’s good for the climate. But when they don’t, it’s tough luck for people and the planet.

Unfortunately, governments have been abetting this “tough luck” for years. Look no further than the Green Climate Fund.

At the behest of governments—mainly from developed countries, where most multinational corporations are headquartered—the private sector has played a central role in the institution from the beginning. There is a special facility specifically to support the private sector, a private sector advisory group that makes policy recommendations on all aspects of the fund, and two private sector observers that comment on the proceedings of the fund’s board.

Ironically enough, one of these observer seats is filled by Bank of America, whose shareholders have pushed back against its financing of the coal industry.

Unsurprisingly, corporate influence is threatening the very purpose of the fund. The rules governing investment and what institutions can receive funding are being written with the express purpose of making the Green Climate Fund as attractive as possible to financial investors.

In a board discussion about whether to exclude oil, coal, and gas projects from receiving money from the green fund, for example, one private sector observer argued that “ruling out technologies” would tie the hands of governments trying to address climate change.

But wasn’t financing a transition away from these “technologies” the point of the fund to begin with?

At this point the small group of social movements and non-profit organizations trying to keep corporate influence in check at the fund are severely outflanked.

So while turning out in big numbers in the Big Apple is critical, it will take more than marching to compel governments to stop supporting the fossil fuel industry and start regulating and reducing climate pollution.

Imagine the collective power we could bring to bear if the 1,400-plus organizations endorsing the climate march—representing the labor movement, people of faith, youth, immigrant rights activists, and of course, environmentalists—pulled out all the stops and poured their resources into an uncompromising, coordinated “no more dirty energy” campaign: one that forces governments to cut taxpayer subsidies to the fossil fuel industry, puts our bodies in the way of fossil fuel extraction and transport, and moves money quickly to community-centered renewable technologies that already exist.

In the meantime, we can and should keep flexing our political muscle. One way is to “flood Wall Street,” as activists staying on in New York are planning to do after the climate march.

Kicking corporations and big banks—and their government enablers—out of the Green Climate Fund is another.