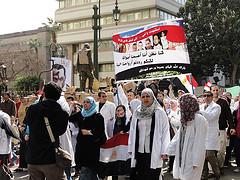 The question now is what happens next.
By Phyllis Bennis | February 11, 2011

After deliberately raising the hopes of millions of Egyptians and millions more around the world, U.S.-backed Egyptian President Hosni Mubarak defied the rising demand of the millions of protesters who have taken to Egypt’s streets, to announce he will remain in office. Claiming he wouldn’t bow to “foreign pressure,” Mubarak, he said he had “laid down a vision…to exit the current crisis, and to realize the demands voiced by the youth and citizens…without violating the Constitution.”

With those words, he took up the mantle of protecting Egypt’s Constitution, an approach championed by Secretary of State Hillary Clinton from last weekend. Clinton had urged that Egypt’s political transition go slow because, she said, if Mubarak stepped down the Constitution required elections within 60 days – to early for free and fair elections. What she ignored was the popular demand of the Egyptian opposition to scrap the current constitution, widely understood to be designed to keep the ruling party in power. Mubarak did describe a range of organizational and political processes he said would lead to amending the constitution, even listing specific articles that should be changed, but the constitutional committee he announced a few days ago is made up of Mubarak loyalists and is broadly distrusted.

Mubarak claimed he’s “totally committed to fulfilling all the promises” he made earlier, but those promises, including a pledge he would not run again in September elections, are based on the assumption that he remains in power at least until then. He did refer to delegating some authority to his newly appointed Vice-President Omar Suleiman, long known for his links with the CIA in coordinating Egypt’s interrogation-and-torture role in Washington’s extraordinary rendition program, but he didn’t give up the power of the presidency.

The celebratory crowds in Tahrir Square – which had grown to a monumental size over the last six or eight hours as people gathered in anticipation of a very different speech – as well as those in Alexandria and elsewhere across Egypt, reacted with fury. There’s little question that the rumors, which reached fever-pitch by the time Mubarak addressed the nation around 11:00 p.m. Egypt time, also stoked the anger when the hated president made clear, despite claiming his belief that the protesters’ demands were legitimate, that he wouldn’t leave Egyptian soil until he was “buried under it.”

The question now is what happens next.

There’s little doubt the protesters of Tahrir Square, those outside the Parliament building, the Canal workers in Suez, and the wide range of Egyptians who have joined the protests in the last few days, will continue their opposition. It’s not clear what role the military will play. Earlier reports indicated that the top military command was meeting without Mubarak – a sign, it was thought, that the military was recognizing Mubarak was no longer in command. Their communiqué spoke of supporting “the legitimate demands of the people,” as they have said before, and was one of the factors that sent tens of thousands of more people to Tahrir Square and its counterpart venues in Alexandria and elsewhere.

But the claims from military commanders that “everything you want will be realized,” claims from leaders of Mubarak’s party that he would hand over power to the vice-president, word from the prime minister that Mubarak might step down all proved false.

In the United States, CIA director Leon Panetta in a public hearing on Thursday said publicly that it was possible that Mubarak might step down – an admission unthinkable until today, and an indication of how far out of the loop White House and other administration officials are. It’s certainly possible that there had been an earlier agreement among the powerful players for Mubarak to indeed resign – and that he reneged at the last minute. But so far there’s no way to know.

Up until Mubarak’s speech on Thursday, the military in Egypt were widely welcomed as partners of the popular opposition. Statements from the military brass to protesters led to chants of the partnership between the people and the military, echoing across Tahrir Square. But the military brass has also made clear that it won’t force or even urge Mubarak to resign – that it would violate their military mandate. What isn’t known is where they will stand if Mubarak orders them to put an end to the protests by any means necessary.

Relationship with the Pentagon

What also isn’t clear is what the relationship is between the Pentagon and the Egyptian military. While it seems clear the political echelon of the Obama administration is scrambling to figure out what’s happening in Egypt, which of the players are up and which are down at any moment, and what the U.S. response should be, the military has a much longer, more consistent relationship with their Egyptian counterparts. Mubarak’s newly anointed Vice-President Suleiman is the linchpin of that relationship, and it’s likely that his longstanding Pentagon supporters – those who actually arranged to funnel the money, arrange the training of his officers, buy and transport the U.S.-made teargas, the B-16 bombers, the tanks, – may know the military’s intention more clearly.

Today will be crucial. Fridays have seen some of the biggest protests throughout this revolution, especially after Friday prayers when people headed to Tahrir Square and other protest venues from the mosques. But today – with the numbers of protesters swelled by workers’ strikes, mobilizations of tens of thousands of lawyers and doctors, and hundreds of thousands of Egyptians across class, religious, gender, and geographic divides all pouring out into the streets, we are already seeing what the people will do tomorrow.

The key will be the response of the military. And of course, the response of their sponsors in the United States. So far, President Obama hasn’t responded to Mubarak’s speech. Before the speech, Obama said briefly that we are watching history in Egypt. What will he and his administration – including the Pentagon – do now? This is where the role of the United States remains key. Mubarak may claim he will not resign under outside pressure, but the reality is there has been little pressure so far – there have been requests. The requests have been denied.

Now what? Will we see police and/or soldiers once again shooting U.S.-made teargas canisters at the hundreds of thousands of women, children, men, families, filling Tahrir? Expectations had been sky-high. Wael Ghonim, the Google exec whose emotional interview after his release by Mubarak loyalists a few days ago, tweeted “Mission accomplished. Thanks to all the brave young Egyptians.” Those hopes have been dashed, their mission isn’t accomplished. They’ll have to make the hard judgments and develop the complicated strategies for the struggle that lies ahead.

The decision for the citizens of the United States is whether we will allow our government to stand by, continue paying $1.5 billion of our tax money to Egypt each year, and enabling this dictatorship to continue. We need to make real President Obama’s earlier call, ironically also in Cairo, for an entirely new way of engaging with the Arab world.

Either we continue to enable dictatorship, or we begin the hard task of redefining all of U.S. policy across the region, from one based on U.S.-defined interests in oil, Israel, and stability regardless of human rights and sovereignty, to one instead based on internationalism, equality, real democracy, dignity, and human rights.