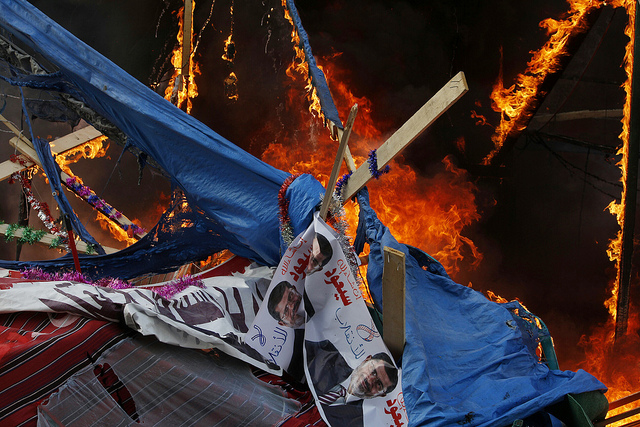 No More Illusions in Egypt

There can no longer be any question that Egypt is once again under the thumb of military authoritarianism.
By Phyllis Bennis | August 14, 2013

With the bloody attack on protest camps in Cairo, the announcement of a one-month state of emergency across the country, and the authority given to the army to “assist” the police in maintaining law and order, there can no longer be any question that Egypt is once again under the thumb of military authoritarianism. The democratic spring of Tahrir Square has been defeated, but the question “for how long” remains open. Egypt has undergone two huge changes since the overthrow of the US-backed dictatorship of Hosni Mubarak, and both will play determinative roles in the current escalating crisis.

First, while there is substantial evidence that Mubarak-era loyalists are playing a major role in the anti-Morsi opposition and especially in the interim government that the military established, U.S. support for and influence on the new power center in Cairo remain uncertain. U.S. economic support for the Egyptian military remains unchanged, but that $1.3bn in military aid is now dwarfed by multi-billion grants from Saudi Arabia, the UAE, and beyond; following Obama’s partial embrace of Islamist-flavored governments in Egypt as well as elsewhere in the region, Washington simply doesn’t have the same influence it once did.

Secondly, and most important, the Egyptian people have risen up to claim their rights as citizens, and have seen their power to change their country. However naive the democratic anti-Morsi protesters may have been about the possibility of overthrowing an elected leader simply by coming into the streets, as if the military would not ultimately play the decisive role, many of those millions of protesters are not likely to accept permanent military dictatorship unchallenged. Egypt today remains horrifically divided, with today’s bloodbath certain to make things worse. The Muslim Brotherhood, under attack by the generals, will almost certainly retrench some of its forces to operate underground, but its current appeal as defenders of Egyptian democracy and its “coalition for legitimacy” may simultaneously broaden their engagement. The memory of the unity of January 2011, and the power that unity created, is not likely to fade quickly.