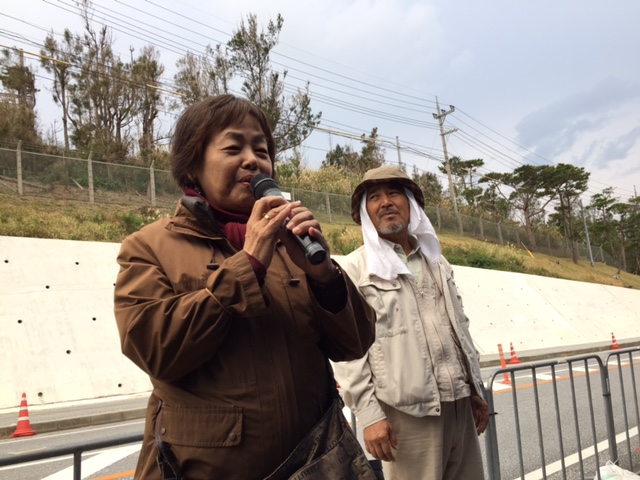 Okinawa: The Small Island Trying to Block the U.S. Military’s “Pivot to Asia”

Last month, the citizens of Okinawa awarded a landslide victory to a governor who wants U.S. troops off the pristine island.
By Christine Ahn | December 19, 2014

Last month, the citizens of Okinawa delivered a landslide victory to Onaga, who ran on a platform opposing the construction of a new U.S. Marine Corps base in northern Okinawa. Using the campaign slogan “All Okinawa,” Onaga pledged “to stop construction using every means at my disposal” and to remove Marine Osprey helicopters, which he called the “biggest obstacles to Okinawan development.”

Onaga’s win — in which he secured the backing of two-thirds of the electorate — constitutes a referendum by the Okinawan people against Japanese Prime Minister Shinzo Abe’s deepening alliance with Washington to further militarize the island. 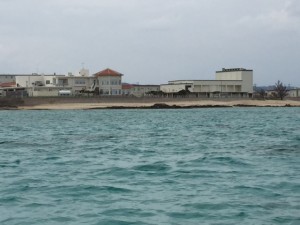 I traveled to Okinawa in early December to attend a women and peacebuilding conference, and to hear from Okinawans about what they think of Washington’s plans to transfer the unpopular Futenma Marine Corps Air Station from the center of Ginowan city to the ecologically pristine Henoko Bay.

As I transited at Tokyo’s Narita International Airport to the gate to board a flight to Naha, it was quite clear that I was traveling to an American base. U.S. servicemen in civilian clothing and camouflage, along with their families, dominated the boarding area.

While waiting for the flight, I shared a table with a tall African-American Marine named Ramone. When I asked him why he enlisted, he said that he had needed a change. His mother adamantly opposed his enlisting because his grandfather returned from World War II “not all right,” and his uncle had never fully recovered from Desert Storm.

Yet with limited opportunities in South Carolina, military life had been good to him, and he was able to quickly climb up the ladder. The father of two daughters, Ramone said he felt much safer raising his family in Okinawa than back at home. After we warmed up, I asked Ramone what he thought about the newly elected governor. He chuckled and replied, “His ideas are different.”

Ramone is among the 26,000 U.S. troops based in Okinawa. Along with their families, they constitute the approximately 50,000 Americans living among 1.38 million Okinawans. Although I was glad that Ramone and his family faced less discrimination and violence than they might have at home, it deeply bothered me knowing how much violence and hardship the ongoing U.S. military occupation of Okinawa has had on the people and the land.

It similarly reminded me of a recent conversation I had with my physical therapist in Honolulu, whose daughter lives with her Marine husband in Okinawa. She, too, said they loved living in Okinawa, even though they have limited interaction with the people. When I finally mustered up the courage to prod her about the violence committed by U.S. troops against Okinawan women, she replied that there were unfortunate restrictions placed on American soldiers in Okinawa due to the actions of a “few bad apples.”

But the more I spoke with the people of Okinawa and visited the potential site of the new U.S. Marine base in Henoko Bay, the more I understood why Onaga’s victory was hugely significant in the decades-long struggle for Okinawan sovereignty. 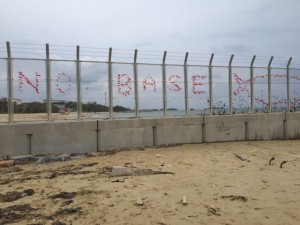 The U.S. military describes Okinawa as the “Keystone of the Pacific” due to its relative proximity to major Asian cities, including Seoul, Tokyo, Taipei, Hong Kong, Shanghai, and Manila. Today, Henoko is key to Washington’s strategy to encircle China and North Korea. According to Japan scholar Gavan McCormack, “This so-called Futenma Replacement Facility (FRF), a land-sea-air base with its own deep-water port, was designed to serve through the 21st century as the largest concentration of land, sea, and air military power in East Asia.”

In 1945, with the defeat of Japan in World War II, Okinawa fell under U.S. control. Although Japan was granted independence in the subsequent 1951 San Francisco Peace Treaty, the United States continued to control Okinawa for 27 more years. In 1972, the United States returned Okinawa to Japan, but a secret treaty between Washington and Tokyo allowed U.S. military bases to remain.

During World War II, Okinawa was the only land battle fought in a populated part of Japan. One in four Okinawans died. According to Suzuyo Takazato, founder of Okinawan Women Act Against Military Violence, in the post-war period, the U.S. occupying forces detained Okinawans displaced by war in concentration camps and requisitioned the most productive land to build U.S. military bases. Okinawa comprises less than 1 percent of Japan’s land area, yet 74 percent of all U.S. bases are located there, where they take up a fifth of all Okinawan land.

In 1995, following the brutal gang rape of a 12-year-old girl by three U.S. servicemen, Okinawans mobilized massive protests calling for the removal of U.S. bases from Okinawa. The situation so shook Tokyo that in 1996 it was forced to renegotiate with Washington the creation of the Special Action Committee on Okinawa, or “SACO,” to begin reducing the U.S. military presence by 20 percent — including by closing the Futenma base in Ginowan City. Like a donut, the Futenma base occupies 30 percent of Ginowan’s city center, and is surrounded by nurseries, schools, universities, and hospitals that operate amidst massive noise from fighter jets, helicopters, and aircraft carriers.

The United States, however, soon replaced its promise to close Futenma with a proposal to relocate the base to Camp Schwab in Henoko Bay. This reversal sparked major outrage. And for 18 years now, the Okinawan people have been staging daily protests at the gates of Camp Schwab and by sea to halt construction of the new base.

Whose Security? Not Okinawan Women’s 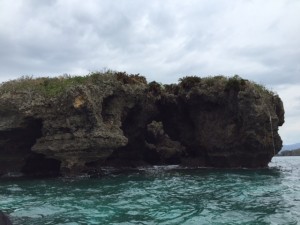 “Okinawa has suffered from the burden of the U.S. military presence for the past 69 years,” says Suzuyo Takazato. As a social worker, she has worked with women survivors of sexual violence for over two decades.

Takazato handed me a document containing decades of post-war U.S. military crimes committed against Okinawan women. As there is no official record of such crimes, Takazato and others mined through police reports and newspaper clippings from 1945 up to 2012. They compiled them into a shocking 26-page document that demonstrates that U.S. military violence against Okinawan women and girls is not just a case of a few bad apples, but rather structural.

During the Korean and Vietnam Wars, Okinawa served as the U.S. military’s launching pad. It was also where American troops, many of them suffering from PTSD, returned after combat and committed violence against the Okinawan people, particularly women and girls. According to Takazato, rape and violent crimes spiked during and after these wars. “They came back from fighting in such terrifying conditions and would lash out against women,” she explains. To manage U.S. soldiers who would break into local homes and abduct women and girls, Takazato explains that, “Like a belt, military brothels were established around military bases.”

Maki Sunagawa, a 24-year-old graduate student at Okinawa Christian University, explained why she opposed the military occupation of Okinawa. First, when she was in junior high school, her brother was in the library at Okinawa International University when a U.S. Marine helicopter crashed into the building. Although none of the students was injured, it raised a question for her about why a U.S. military base was so close to where they lived. Second, when she was in high school, one of her closest friends confided in her that she had been gang raped by five soldiers in civilian clothes. Sunagawa said her friend never told her parents or the police, and for the past eight years has suffered from severe depression, unable to complete high school studies.

A Stars and Stripes graphic showed that in 2011, there were 333 reports of U.S. Marines committing sexual assault against women on Marine bases worldwide. Okinawa, with 67 assaults, was second only to Camp Lejeune in Jacksonville, Florida. Attempts have been made to restrict U.S. soldiers’ activities, but attacks continue. In 2012, for example, on a short deployment to Okinawa from Fort Worth, Texas, two American naval servicemen attacked and raped an Okinawan woman. Unlike most cases of sexual assault that fail to deliver justice to women survivors, the two sailors were tried and convicted in Japanese court and are now serving ten-year sentences in a Japanese prison. “We are fearful during holidays like Labor Day and the Fourth of July,” says Takazato, because of the rise in violence against women and children.

Contamination of Sea and Land 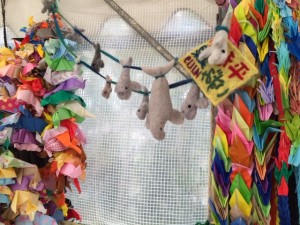 As we traveled by boat in Henoko and Oura Bays — where plans are underway to reclaim 160 hectares of sea to construct two massive runways and a loading dock — I spoke with several activists, young and old, dedicated to halting construction.

Takeshi Miyagi, a 44-year old farmer, said he abandoned his fields in July to join the resistance by monitoring the sea by canoe. Miyagi says he and other activists are ensuring the protection of the biologically rich ecosystem of the Henoko and Oura Bays and the survival of the dugong. The Japanese Ministry of the Environment lists the dugong — a marine mammal related to the manatee — as “critically endangered.” It is also on the list of U.S. endangered species.

According to McCormack, the Japanese Department of Defense found that of the 5,334 species that exist in the sea, 262 are under threat of extinction. The same Defense Department report alleged that few dugongs inhabit the bays, but surveyors recently discovered over the course of two months over 100 dugongs feeding in the reclamation area. This has prompted Japanese and American conservation groups to file a lawsuit against the U.S. Department of Defense to halt construction.

The strong resistance by Okinawans against the construction of the new base in Henoko Bay is not only challenging the Obama administration’s military pivot to Asia, but also raising awareness of the negative human and ecological impacts of hundreds of U.S. military installations around the world. Most importantly, the democratic victory in Okinawa offers hope to similar struggles in Guam, the Philippines, and South Korea’s Jeju Island that with dedicated persistence and nonviolent resistance, they too can stop the world’s most powerful war machine.

Foreign Policy In Focus columnist Christine Ahn is the International Coordinator of Women De-Militarize the Zone.