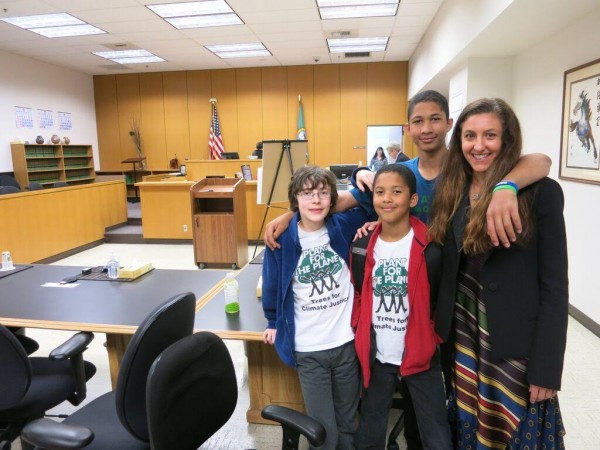 Attorney Andrea Rogers with some of her young clients. (Photo: Our Children’s Trust)

Our Climate Future Could Be Decided in the Courts

People from Seattle to Fiji are filing lawsuits over global warming — and they just might have a case.
By Emily Schwartz Greco | July 17, 2015

Climate action is finally gaining ground in Washington. No, not that Washington.

Following their victory in a Seattle court, eight children are pressing Washington State’s Department of Ecology to crack down on carbon pollution. The agency has until August 7 to reach an agreement with the youths, who sued after the department rejected their petition. Otherwise, the kids will go back to court.

“I hope our voices are heard,” said Aji Piper, a 14-year-old and one of the plaintiffs.

Judge Hollis Hill, for one, is listening. She agreed with the teens and tweens in a first-of-its-kind ruling, citing a “historical lack of political will to respond adequately to the urgent and dire acceleration of global warming.”

Climate change mashes up environmental, moral, meteorological, economic, political, scientific, and industrial challenges. Given that complexity, it’s no wonder it took more than 25 years of international climate talks for global emissions to even stabilize.

Slashing climate pollution may take something new — like suing governments for failing to shield their constituents from a climate catastrophe and prosecuting the oil, gas, and coal industries for this mess. Ultimately, climate lawyers could replicate successes scored with tobacco litigation and the legal actions that brought about marriage equality.

The biggest breakthrough came right after the Washington ruling when a Dutch court ordered the government of the Netherlands to reduce that nation’s emissions by 25 percent within five years. As the low-lying nation currently aims for only a 17 percent cut, this case filed on behalf of 900 people marked a global precedent.

More lawsuits are in the pipeline.

One pits South Pacific islanders whose countries are threatened by rising sea levels against big oil companies. These folks from Vanuatu, Kiribati, Tuvalu, Fiji, the Solomon Islands, and the Philippines may already have Exhibit A.

It’s an email from Lenny Bernstein, a scientist who worked for both Exxon and Mobil when they were separate companies. In this note, obtained by the Union of Concerned Scientists, Bernstein reveals that Exxon was already taking climate-related risks into account with its investment decisions by 1981.

Experts say the scientist’s email shows that corporate leaders knew for more than 30 years that their oil and gas operations were bound to harm the climate. Instead of changing their ways, they emulated Big Tobacco by bankrolling climate denial.

Proving government liability might also be easier than you’d think. The record shows that U.S. officials began to fret about climate change by 1965.

President Richard Nixon’s advisor — and future U.S. senator — Daniel Patrick Moynihan made this clear in a 1969 memo he wrote to another Nixon aide. In it, he outlined “the carbon dioxide problem” caused by fossil fuels.

“Goodbye New York. Goodbye Washington, for that matter,” Moynihan wrote of the consequences of a potential 10-foot rise in sea levels. “We have no data on Seattle.”

Julia Olson is the founder and lead lawyer of Our Children’s Trust, one of the two groups that helped file the Washington lawsuit. She says the evidence of federal wrongdoing is clear.

“Fifty years ago, they knew exactly what was happening and how to stop it,” she told me. “The solutions at this point lie in the courts.”

She came up with her youth-focused strategy after becoming a mom.

“Kids don’t get to vote and choose the policies for their future,” Olson said. “They are going to suffer the impacts of climate destruction more than the rest of us.”

The lawyer and her team have filed more than a dozen climate cases on behalf of children. Suits in Oregon, Washington, Massachusetts, Colorado, and North Carolina are pending. More are coming soon in Pennsylvania, Florida, and Hawaii. Also on this deep docket: suing the federal government for a second time by the end of July.

All those lawsuits just might bring about a legal tipping point.