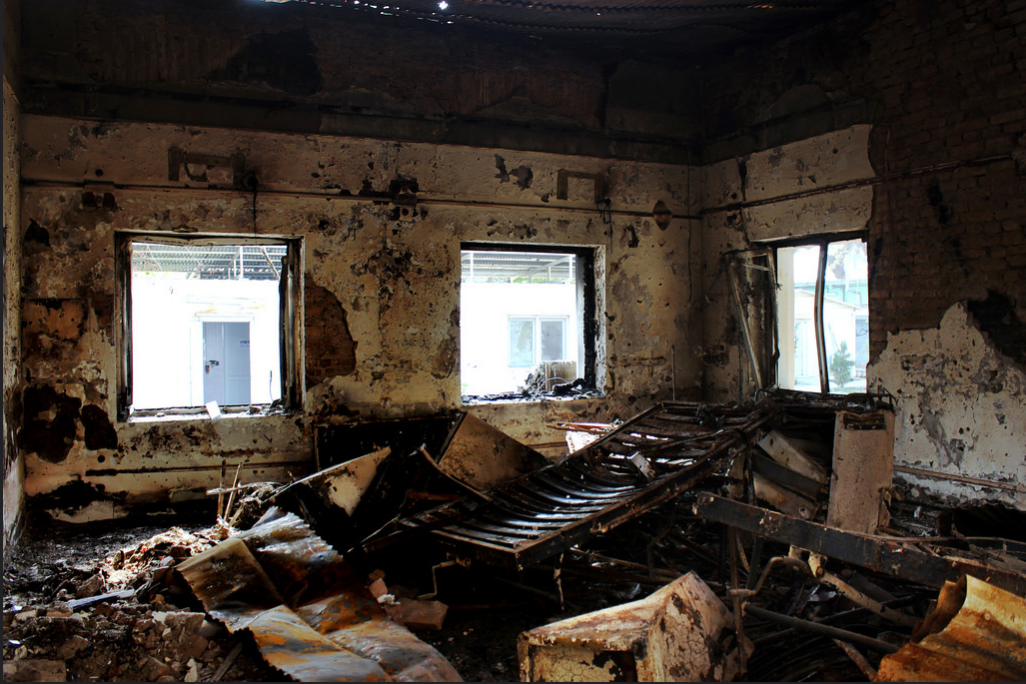 We need an independent investigation of the brutal U.S. attack on a Doctors Without Borders hospital in Afghanistan, which killed 42 people.
By Phyllis Bennis | May 3, 2016

The Pentagon just made it official: No war crime was committed when a U.S. plane attacked the Doctors Without Borders hospital in Kunduz, Afghanistan last year, killing 42 patients and health workers and injuring many more.

At least, that’s the conclusion of its own investigation — nearly all of which remains classified.

No war crime, says the Pentagon.

The 16 military personnel involved all will face some kind of administrative consequence, but none of them will be court-martialed. The 16 do not, apparently, include the top strategists of the U.S. war in Afghanistan — nor anyone responsible for creating or approving the system for responding to desperate calls from civilians being slaughtered by U.S. warplanes. Nor anyone whose job it is to be sure that the U.S. military doesn’t violate the Geneva Conventions’ prohibitions on things like attacking hospitals.

We don’t know for sure, because the vast majority of the official report on the Kunduz hospital assault was redacted — blacked out — so no one without top security clearance could read even the Pentagon’s own assessment of what happened. Apparently Congress, the press, and the public are all supposed to be satisfied with the explanation that the cause was “a combination of human errors, compounded by process and equipment failures.” The official write-up adds that “fatigue and high operational tempo also contributed” to the “fog of war” — that old standby for excusing large-scale attacks on civilians.

No one should be satisfied with this internal investigation. There’s an urgent need for an independent, international investigation, as Doctors Without Borders has been demanding since the attack took place last October.

The press release from U.S. Central Command quotes Army General Joseph Votel, the current Centcom commander. “The fact this was unintentional, an unintentional action, takes it out of the realm of actually being a deliberate war crime against persons or protected locations,” the general insists. “That is the principal reason why we do not consider this to be a war crime.”

General Votel can consider whatever he likes, but he doesn’t get to re-write international humanitarian law on his own. Some war crimes do include specific intent — a charge of genocide, for instance, requires the perpetrator’s intention to destroy, in part or in whole, a racial, ethnic, religious, or other group. Other war crimes, however — including violating the Geneva Conventions — do not require that kind of specific intent. (Criminal law has a similar distinction. Some crimes, like assault or battery, are based on a particular action; a separate crime is committed when there is assault with intent to kill.)

In this case, the 4th Geneva Convention, Article 18, states unambiguously that “civilian hospitals organized to give care to the wounded and sick, the infirm and maternity cases, may in no circumstances be the object of attack, but shall at all times be respected and protected by the Parties to the conflict.” Criminal negligence may be involved rather than criminal intent, but that would still be a crime.

“Typically” is a slippery word. One might conclude from Campbell’s words that U.S. military personnel right up the chain of command are indeed “typically” liable for war crimes when they, just for example, order the bombing of heavily populated cities to force regime change, or a drone attack on someone from the kill-or-capture list despite his nephew being at his side. But in fact U.S. military personnel are virtually never charged with war crimes.

And despite the years of brutal U.S. assaults launched in the name of the global war on terror, there is still nothing “typical” about an attack on a civilian hospital whose location was well known to the military, whose staff was desperately calling to try to stop the bombing, and who lost at least 14 doctors and other staff, 24 patients, and four caretakers in the attack. So regardless of whether it’s true — or acceptable — that “typical” war crimes involve specific intent, that is certainly not a requirement for determining what a war crime is.

On May 3, the United Nations Security Council unanimously approved a resolution reaffirming member states’ obligations to protect hospitals, the sick, and the wounded in war zones. Given recent years’ escalation of attacks on hospitals and clinics — from Israel’s 2014 assault on Gaza, to last year’s Kunduz bombing, and last week’s attack on a Doctors Without Borders hospital in Aleppo, which killed at least 50 people — such a resolution is urgently needed.

Quite likely the devastating attack on the hospital at Kunduz was in fact a war crime. Possibly it wasn’t. But there’s no reason in the world for anyone to accept that an internal Pentagon investigation — in which almost all of the 3,000 page report remains classified — is somehow sufficient to determine the answer. An independent, international investigation is crucially required. Letting the Pentagon investigate itself simply isn’t good enough.