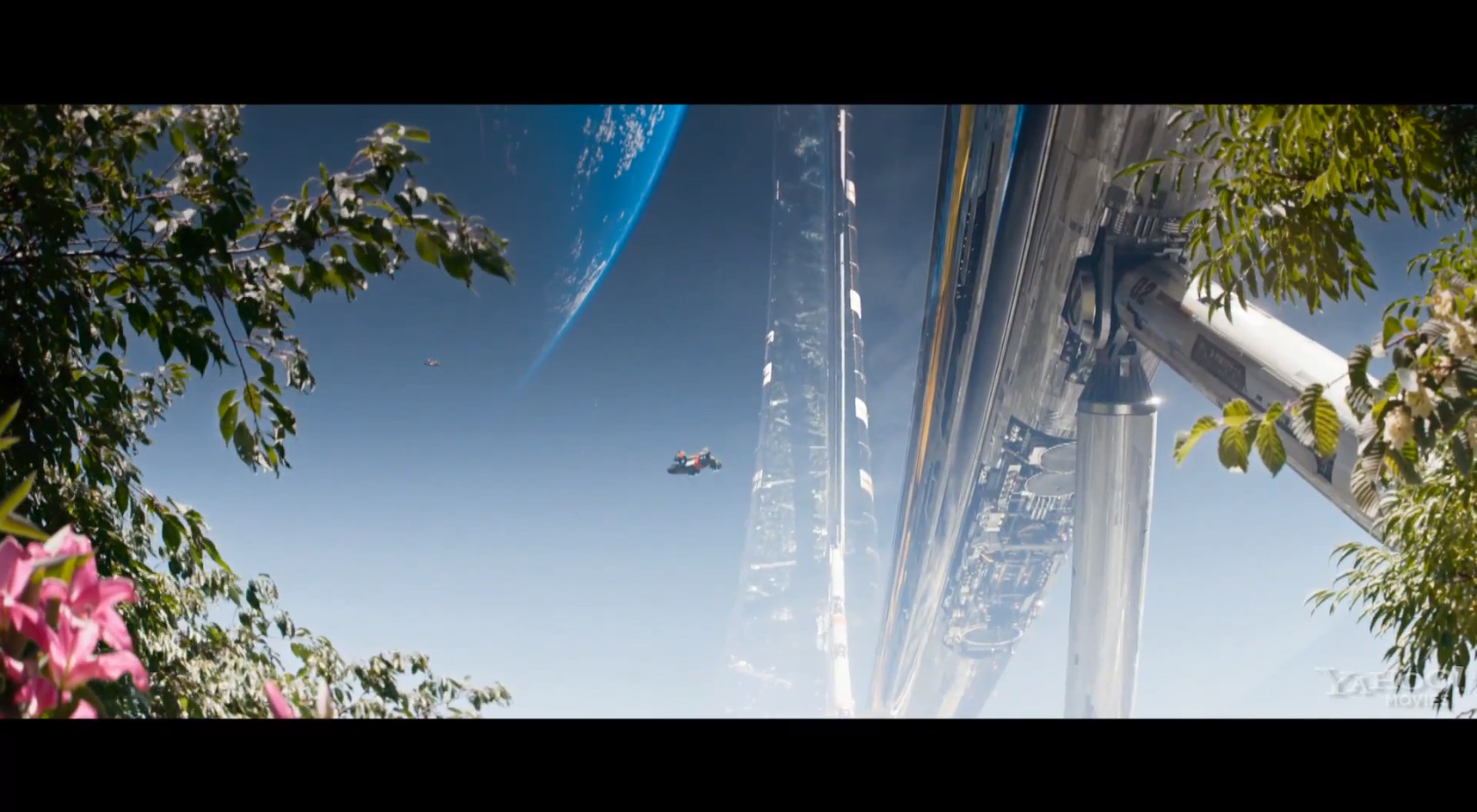 Concerns about economic inequality are driving summer blockbusters and New York Times best sellers. When will they start driving our politics?

If inequality sells in bookstores and box offices, it will sell at the polls as well.
By John Feffer | May 21, 2014

At the beginning of last summer’s blockbuster film Elysium, three rogue shuttles from Earth approach a space station that houses a super-rich enclave. It’s the ultimate offshore gated community, where the inhabitants possess magical machines that rid them of disease so that they can practically live forever. The shuttles, meanwhile, contain the poor, the sick, “the wretched refuse of your teeming shore.” In this science-fiction scenario, the Earth has been become little more than a third-world outpost of hovels, prisons, and unregulated factories.

Two of the shuttles containing illegal border-crossers are immediately shot down. One of them, however, manages to land on Elysium. A mother and her disabled child break into a sparkling clean house and locate the magic machine. The child lies on the flat surface, the machine hums, and her handicap disappears. It’s a short-lived triumph as armed guards seize the intruders and repair the security breach.

The future, as Hollywood imagines it, rarely looks good. We’ve either bombed ourselves back into barbarism (Mad Max, The Road), trashed the environment, (Soylent Green, Wall-E), or somehow eliminated our ability to procreate (The Children of Men). In Total Recall, the horrors of unregulated capitalism have been outsourced to Mars where an autocrat runs a mining operation designed by Hieronymus Bosch.

If in the past we imagined a future of distant penal colonies for the criminal 1 percent, we now are projecting a penal earth for the outcast 99 percent. Elysium is almost a parody of this 99-to-1 dichotomy, for the space station is home to only a tiny handful of people while Earth looks like the crack-ravaged South Bronx of the 1980s. In this scenario, the wolves of Wall Street have siphoned up as much wealth as they can before departing, not for some exclusive Caribbean island—rising waters have presumably eliminated those tax havens—but for the insulated comforts of outer space.

Hollywood projects our dreams and fears. In the past our cinematic apocalypses have reflected our obsessions with nuclear holocaust and environmental degradation. We’re certainly still worried about those fates—along with pandemics and zombies—but gross inequality now competes for our attention. The Occupy movement no longer squats in our squares. The indignados have faded into the European woodwork. But the analysis and demands of the 99 percent have managed to trickle up.

Consider the new book by Thomas Piketty, the French economist. In his analysis of tax records in France, the United Kingdom, and the United States, Piketty shows how capitalists have run away with capitalism and left the workers behind. In more formal terms, when the rate of return on capital outstrips the growth rate of the economy, inequality rises. Moreover, Piketty shows how public policy has had a profound impact on wealth and poverty in society. The trends associated with the rise of finance capitalism and the spread of globalization have certainly encouraged the consolidation of a class of super-rich and the erosion of wages for the middle and working classes. But certain governments—France, Germany, Japan—have used tax and welfare policies to redistribute the wealth without any appreciable impact on growth.

Not that I’ve read Capital in the Twenty-First Century. Piketty’s book has become virtually impossible to obtain. I recently walked into the country’s largest independent bookstore—Powell’s in Portland—and asked for the bestseller. The clerk explained that every copy had been eagerly snatched up, and I should come back in a couple weeks.

What explains Piketty’s extraordinary success? His book is certainly not the first study of economic inequality. My colleagues at the Institute for Policy Studies have been hammering at this issue for more than a decade. Chuck Collins published 99 to 1: How Wealth Inequality is Wrecking the World and What We Can Do About It a couple years ago. The most recent version of our CEO pay report, which has documented the outrageous compensation packages for our titans of finance and business, focuses on the growing divide in the restaurant industry between the richly compensated (Howard Schultz of Starbucks) and the barely hanging on (the toilers in the fields of fast food). “CEO Howard Schultz pocketed $236 million in exercised stock options and other ‘performance pay’ over the 2012-2013 period,” the report explains. “That translates into an $82 million taxpayer subsidy for Starbucks—enough to raise the pay for 30,507 baristas to $10.10 per hour for a year of full-time work.”

And even before Piketty became a surprise bestseller, we were awash in statistical evidence. “In the United States, according to the economist Emanuel Saez of the University of California, Berkeley, the richest 10 percent increased their share of total pretax income from about 33 percent in the late 1970s to 50 percent by 2012,” Paul Starr writes in The New York Review of Books. “The top one percent alone now capture more than 20 percent of total income, double the share they received before the Reagan years.”

Piketty, however, provides the kind of continental, academic imprimatur that mere number crunchers in the United States lack. His use of an extensive data set appeals to the empirically minded, his prescriptions satisfy the policy-minded, and his references to Austen and Balzac impress Paul Krugman. And he offers the long view, situating today’s inequality in the much larger historical context of oscillations in income distribution. Finally, his book has put the Heritage Foundation and the American Enterprise Institute on the defensive, as they dust off their usual arguments about the dangers of taxation.

But perhaps the most important reason for Piketty’s success here in the United States is a latent outrage at the deal that the Obama administration made down at the crossroads at midnight in the wake of the financial crisis. As we all know, the U.S. economy did not collapse in 2009, though it came close. Many people continue to suffer from the financial follies of the 2000s, their homes foreclosed on, their jobs gone, their pension funds looted. But the Obama administration can point to larger, statistical successes: much lower unemployment rates (6.3 percent today compared to 10 percent in October 2009) and some modest growth (close to 3 percent last year). More critically, for all the high rollers on Wall Street who supported Obama’s campaign, the stock market has gone steadily upwards, with the Dow Jones now cresting above 16,000 (a 94-percent increase over the last five years).

The deal with the Devil, however, was an ugly one. Only one person is going to jail as a result of the widespread malfeasance connected to the financial crisis—Kareem Serageldin of Credit Suisse. His story reads like one of those cautionary Mafia narratives in which one of the mobsters takes the rap for the entire gang, keeps his mouth shut, does his time, and returns for his payout when his time is up.

For despite a very brief period of self-imposed austerity at the depths of the crisis, the financial world has continued to enjoy extraordinary success. Just take a look at how our oligarchs—oops, I’m sorry—our “wealth generators” have benefitted. The top 25 hedge fund managers took in an average $134 million in 2002. By 2009, their earnings went up to a billion dollars (that’s right: they each made a billion dollars a year!). The market “correction” didn’t send them back to zero or to Sing Sing. Rather, by 2012, they were still making tons more than in 2002: $537 million. In fact, in 2010, these top 25 managers together made four times as much as the CEOs of the top 500 Standard and Poor companies—combined. These numbers make space station Elysium look more and more plausible.

As for the Obama administration’s effort to regulate Wall Street, it has been frankly half-hearted. The business world tried to upend Dodd-Frank and largely failed, but implementation of the reforms remains sketchy. Even that notoriously risky financial instrument, the commercial mortgage-backed security, is staging a comeback.

The 2016 presidential elections will address a range of issues, many of them entirely irrelevant. Foreign policy will inevitably surface as candidates debate the pros and cons of the Obama doctrine. But unless a major war has broken out by that point, Americans will focus as they usually do on their own wallets. As such, the wisest candidates will focus on gross inequality. Piketty’s book, whether it’s read or not, should be a wake-up call for politicians. If inequality sells in the stores, it will sell at the polls as well.

At the end of Elysium—spoiler alert!—the 99 percent have given up their strategy of trying to break into the ranks of the super-wealthy on a case-by-case basis. It just wasn’t working. Instead, thanks to the Christ-like sacrifice of the Matt Damon character, they transform the entire system so that the health-case benefits of the magic machines are available to all. It’s a powerful promo for universal health care, even it doesn’t address the tough questions of how the limited resources of a heavily slanted economy can be shared fairly among all. But where Hollywood films end is where U.S. politics must begin.