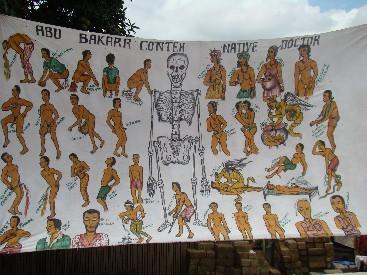 In countries like Sierra Leone, AFRICOM is definitely not the answer to Africa's challenges.
By Joseph Kaifala, Emily Schwartz Greco | July 30, 2008

An herbal doctor’s banner in Freetown, Sierra Leone, where many people still lack healthcare, illustrates many of the chronic diseases affecting the lives of ordinary people. Lack of access to medical care makes traditional medicine an inexpensive option for many.

The United States has other priorities. It will launch AFRICOM (U.S.-Africa Command) on October 1, as the sixth Combatant Command. The Command’s area of responsibility includes the entire continent of Africa, with the exception of Egypt. Despite U.S. claims that this new command will focus on humanitarian crises and efforts to stem transnational terrorism, many scholars have expressed concerns about it increasing the militarization of development aid.

It’s difficult to ascertain that socioeconomic development breeds political security, but in countries like Sierra Leone, AFRICOM is definitely not the answer. Having endured a decade of civil war in which tens of thousands were killed, Sierra Leone remains the poorest country in the world. When the war ended in 2002, an estimated 50,000 Sierra Leoneans had lost their lives. The country was left with several thousands of civilian amputees, as well as approximately 410,000 orphans and ex-combatants, and a traumatized population. The entire ravaged country still needs to de-traumatize, rehabilitate and rebuild.

The recent UN Human Development Index ranked Sierra Leone as the least developed country in the world. A World Health Organization report also states that a baby born in Sierra Leone is three and a half times more likely to die before its fifth birthday than a child born in India, and more than hundred times more likely to die than a child born in Iceland or Singapore. Even with the promises of the newly elected government of Ernest Koroma, the people of Sierra Leone still live in abject poverty, and prospects for a major improvement in the near term is rather slim.

Unfortunately, international assistance often gets entangled into the corruption network, eluding the destitute. Hence, the U.S. war on terror isn’t a primary concern for Sierra Leoneans in the face of the struggle to survive another day.