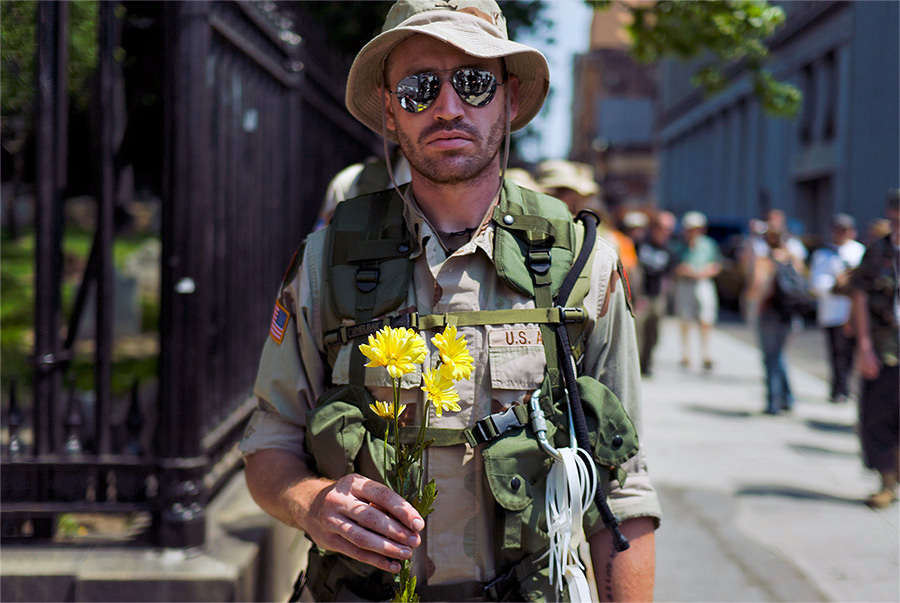 Promoting a “Right to Heal” from Ft. Hood to Abu Ghraib

Veterans of the Iraq and Afghanistan wars are holding the U.S. government accountable for innocent victims on all sides of the fighting.
By Phyllis Bennis | April 14, 2014

The recent shootings of soldiers at Fort Hood and other U.S. military bases have once again brought to public attention the challenge of making sure that soldiers returning from war zones find security and support at home. The Washington Post calls the pressures on veterans “the next war.” But whatever war comes next, those existing wars in Iraq and Afghanistan and their consequences continue.

The exploding rates of suicide among Iraq and Afghanistan veterans, the escalating numbers of soldiers turning their weapons on each other as well as themselves, and the endemic spread of PTSD all are linked to the wars themselves. Wars of aggression and occupation have an enormous, terrible effect on the young women and men ordered to fight them.

And that’s just on the U.S. military side. We also have a moral and legal responsibility to respond to the wars’ even more devastating impact on millions of Afghans and Iraqis.

Last March, a hundred or so people filled a local Washington, DC church, reprising a scene more common several years ago—an examination of the impact of the U.S. war in Iraq. That night, the young soldiers of Iraq Veterans Against the War (and some of their parents) joined Iraqi women’s rights and labor leaders, along with U.S.-based lawyers, epidemiologists, and activists, to build a campaign demanding what they call the Right to Heal. The veterans’ demands begin with the urgent need to end the military’s practice of sending soldiers diagnosed with PTSD, traumatic brain injury, and other related wounds back into battle. That need is linked directly to dealing with the suicides, homicides, domestic violence, and other problems facing the high numbers of veterans returning from the post-9/11 wars with serious mental injuries.

But IVAW linked its demand for better care for U.S. veterans to the need to respond to the deep destruction left in Iraq and Afghanistan—social, environmental, and medical—that continues to plague the violence-riven countries.

U.S. troops were redeployed out of Iraq two-and-a-half years ago. But the United States’ nearly decade-long occupation—which followed not only the 2003 invasion, but also the Pentagon’s 1991 war and 12 years of crippling U.S.-led sanctions—destroyed Iraq’s infrastructure, despoiled the country’s environment, and shredded its social fabric. The consequences of the U.S. war remain embedded in the shattered cities, polluted rivers, carcinogenic military burn pits, and in the bodies of hundreds of thousands or millions of Iraqis, as well as of tens of thousands of U.S. troops.

Meanwhile, in an all-too-rare front-page feature documenting the Afghanistan War’s ongoing impact on Afghans, the Washington Post recently dissected the consequences for the “rising number of children … dying from U.S. explosives littering Afghan land.” The Post set a scene similar to post-occupation Iraq: “As the U.S. military withdraws from Afghanistan,” it reported, “it is leaving behind a deadly legacy: about 800 square miles of land littered with undetonated grenades, rockets and mortar shells. The military has vacated scores of firing ranges pocked with the explosives. Dozens of children have been killed or wounded as they have stumbled upon the ordnance at the sites, which are often poorly marked.” Ominously, it adds, “Casualties are likely to increase sharply; the U.S. military has removed the munitions from only 3 percent of the territory covered by its sprawling ranges, officials said.”

Back at the Washington church, with film producer and longtime television host Phil Donahue moderating, IVAW members detailed their experiences. The mother of Joshua Casteel, an army interrogator at Abu Ghraib prison who died of a rare cancer in August 2012, described the toxic nature of the military’s burn pits—which are filled with plastics and other chemical materials—100 yards from where Joshua lived, worked, and breathed thick black smoke for seven months in 2004.

U.S. environmental toxicologist Mozhgan Savabieasfahani documented the cancers, birth defects, and other health crises among Iraqis, particularly in areas where “the Iraqi public has been exposed to toxic compounds, such as lead and mercury.” She noted, “I would like to see large-scale environmental testing in Iraq.”

Iraqi women’s rights advocate Yanar Mohammed called for “reparations for families facing birth defects, areas that have been contaminated. There needs to be clean-up…. The U.S. has to be held to account for this.”

Such accountability—to the people of Iraq and Afghanistan and to the U.S. forces returning from years of war and occupation—would go much further to protect U.S. troops and veterans than better gun control at Fort Hood.

Phyllis Bennis directs the New Internationalism Project at the Institute for Policy Studies in Washington, DC.