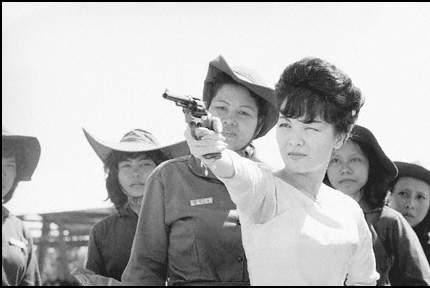 With the latest Pentagon resignation, the Vietnam analogy continues to haunt the United States in Afghanistan.
By Saul Landau | June 25, 2010 The McChrystal debacle dramatizes how military thinking dominates U.S. policy — look at how much of the budget the Pentagon commands — as well as the utter hopelessness of achieving anything but draining defeat from the U.S. occupation of Afghanistan. This lesson should have been learned after Vietnam. As Yogi Berra said, it’s “déjà vu all over again.”

Washington handpicked Hamid Karzai to become president of Afghanistan. After serving one term, beloved by few of his fellow citizens, Karzai has publicly proclaimed a lack of confidence in the ability of his U.S. benefactors to prevail against the enigmatic Taliban. He told the media he no longer trusted the U.S. commitment — its ability to win the war and its staying power. Indeed, he has begun to talk — perhaps even negotiate — with the very entity against whom the U.S. military has engaged for a decade, suffering more than 1,000 dead and many more wounded, both physically and mentally.

Simultaneously, to cover his bets, Karzai pretends he is grateful for Washington’s generous assistance. Shocking? Never happened to us before? Hit Google and you’ll find our Vietnamese Karzai.

In the 1950s, the Geneva Accords called for a vote for president in Vietnam. Even Dwight Eisenhower, in his memoirs, conceded that Communist leader Ho Chi Minh would have won that election with more than 80 percent of the vote. To avoid this result, the United States and some NATO allies created the Republic of South Vietnam and chose Ngo Din Diem as president. Among Diem’s promoters were defense intellectuals, the neoconservatives of their day, as well as Cardinal Spellman and the Kennedy family.

Diem, a Catholic president of a newly created Buddhist country, knew that he must watch his generals — mainly non-Catholics — very carefully. As U.S. military advisers pushed the Vietnamese military to fight aggressively against the Viet Cong, the communist guerrillas in the South, Diem urged the generals to keep casualties limited—meaning no aggressive campaigns.

In early November 1963, just before Kennedy’s assassination, some Vietnamese generals staged a coup against Diem — with tacit U.S. approval, if not downright encouragement — and assassinated him. Diem’s killers became heads of state, backed immediately by Washington. His widow, Madame Nhu, blamed the U.S. government for the assassination: “Whoever has the Americans as allies does not need enemies.”

Did Karzai read Madame Nhu’s statement? After serving a first term that gave corruption a bad name, Karzai won a second term in 2009. Like Diem, whose family received key power posts, Karzai protects his own. His brother, Ahmed Wali Karzai, runs one of the biggest narco-trafficking operations in the country and has a gang of thugs working for him. In addition, according to The New York Times, Ahmed Karzai receives “regular payments from the Central Intelligence Agency, and has for much of the past eight years, according to current and former American officials.” The Times also reported that “The agency pays Mr. Karzai for a variety of services, including helping to recruit an Afghan paramilitary force that operates at the CIA.’s direction in and around the southern city of Kandahar, Mr. Karzai’s home.”

During the Vietnam War, some U.S. corporations made out like proverbial bandits by supplying the armed forces. In Afghanistan, the notorious BP and Halliburton empires have made billions providing for the needs of NATO forces. Some Taliban groups also understand the profitable byproducts of war and collect bribes for not assaulting convoys carrying material to the military from Pakistan.

Meanwhile, the best-laid plans of Obama’s generals have fallen short of their goals. General McChrystal’s much-trumpeted surge did not win the battles for Marja. Nor does the re-conquest of Kandahar seem in the cards. The NATO allies have grown weary. The Dutch have deserted, and even the toady right-wing Canadian government will depart in 14 months. Indeed, U.S. forces are also due to withdraw in 2011.

In 1975, Congress cut off funds for U.S. support for the Vietnam War. Those who voted for the cut asked the obvious question. What had the United States achieved after a decade of fighting and killing that left 58,000 U.S. dead, hundreds of thousands wounded, four million Vietnamese casualties, and a land destroyed? Many now ask that same question about Afghanistan and come up with the same answer: Not much.

The U.S. public shows signs of war-weariness, even though most haven’t been touched directly by the conflict. They have become tired of hearing and reading about it. Millions of Americans sing “God Bless America” at sporting events, honoring those who serve in the military. Most of those people don’t volunteer or even write letters to the troops.

And still the war drags on. The elusive Taliban — in bed with Pakistani intelligence and apparently also on the couch with Karzai — have learned, like the Viet Cong of old, to vanish as American troops approach. They elude the heralded “decisive battle.” The old Afghan saying rings loud: “Foreign invaders may have the clock but we have time.” The Vietnamese had similar sayings.

The United States was born in an anti-imperial war. We have had little success exporting our order to developing nations (Vietnam, Iraq, Afghanistan). But we do suffer long-term negative effects from those bloody adventures. Some Americans remain permanently scarred and crippled; others never forgive or forget. The Vietnamese won and now love doing business with us. But here the analogy with Vietnam breaks down. The Iraqis and Afghanis (and many in Pakistan as well) will not claim victory. Rather, they — the families of those killed by U.S. troops, bombs, and drones — will likely cultivate hatred for the United States for decades to come.

Saul LandauAward-winning filmmaker and activist Saul Landau is an associate fellow at the Institute for Policy Studies.