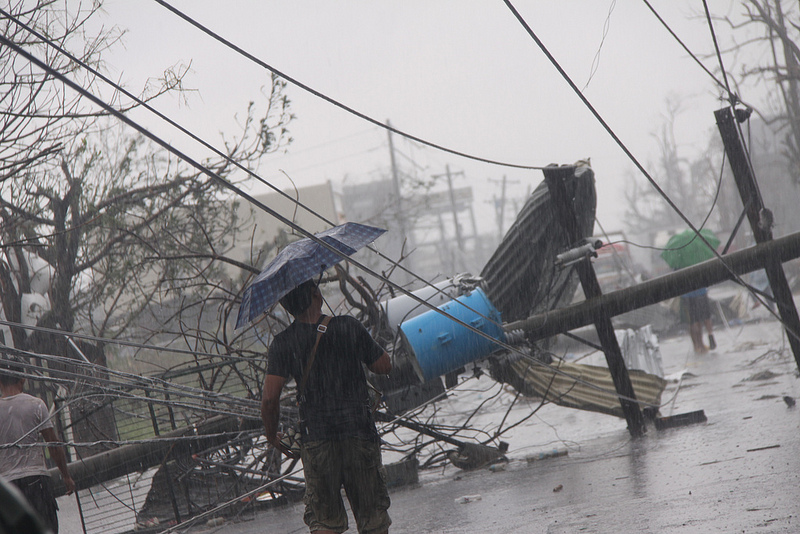 Responding to Haiyan: A Typhoon Tax

We need a national climate response to match the scale of the Philippines typhoon and the extreme weather happening in other parts of the world.
By Janet Redman, John Cavanagh | November 21, 2013

Americans are generous by nature. About half of U.S. families contributed to earthquake relief in Haiti in 2010, and millions of us have already supported typhoon aid for the Philippines.

But there’s a golden opportunity for our country to do much more. We can help generations of Filipinos withstand the typhoon seasons that rock the island nation every year from summer to fall. The most meaningful thing the United States could do is take decisive action on climate change.

As Typhoon Haiyan wreaked havoc across the central Philippines, representatives of 194 countries were boarding planes to Warsaw for the annual United Nations climate talks. These negotiators are charged with finding ways to collectively move forward to slow the greenhouse gas emissions that fuel climate change.

While no given storm can be pinned on man-made greenhouse gas emissions, scientists believe the daily acts of giant corporations and millions of human beings using fossil fuels are warming the planet. We’re making the oceans rise.

And warmer Pacific waters have increased the deadly punch of the typhoons that have battered the Philippines and other nations for centuries. We saw this ourselves in New Orleans and New Jersey with Hurricane Katrina and Superstorm Sandy.

So, what should we do now? In addition to upping the paltry $20 million the U.S. government has pledged in disaster relief (a drop in the bucket compared to what’s needed for 4.4 million displaced Filipinos who live on small and hard-to-reach islands), the U.S. can do far more to mitigate global warming.

We need a national climate response to match the scale of the destruction from this typhoon and the extreme weather happening in other parts of the world.

For starters, our government can agree to an international approach for compensating the peoples of developing countries for the loss and damages they suffer because of global warming. That’s an area in which our own climate negotiators have been particularly intransigent.

Then, we need preventative action by all major polluters — ourselves included — to lower the threat of future climate disruption. That will stave off many of the humanitarian disasters that will otherwise become increasingly frequent.

We can start by agreeing now to ambitious and legally binding cuts to climate pollution at home and regulating our economy to mitigate climate change. And we can provide support for all countries, including our own, to build carbon-free energy and climate resilience into their existing plans.

Unfortunately, U.S. chief climate negotiator Todd Stern is downplaying this approach. No significant “change in overall levels of public funding from developed countries is likely to come anytime soon,” he said a few weeks ago.

This reluctance is a mistake. Taking action isn’t just the right thing to do — it’s smart economics. The prominent British economist Sir Nicholas Stern pegs the cost of climate change to 2 percent of global GDP. And the Federal Emergency Management Agency and the World Bank calculate that every dollar spent on disaster prevention and preparedness now — like helping vulnerable communities adapt to a warmer world — will save between $5 to $7 in relief later.

We have the money. We simply need to shift priorities.

How about collecting a “typhoon tax” from the fossil fuel giants that have profited so bountifully from the polluting industries that contribute to the warming that just killed thousands of Filipinos? Or moving billions from obsolete weapons systems to a climate security fund? Or introducing a tax on speculative stock and derivatives trades, as 11 European countries are doing, and using the proceeds to transition away from fossil fuels?

Yes, the United States can and must mobilize humanitarian aid for the Philippines, but we also need to change course right now.

Climate change is more than a moral outrage. It is killing people.

John Cavanagh directs the Washington-based Institute for Policy Studies, and has written and co-authored 12 books on global development issues , including Plundering Paradise: The Struggle for the Environment in the Philippines. Janet Redman directs the Institute’s Climate Policy Program.