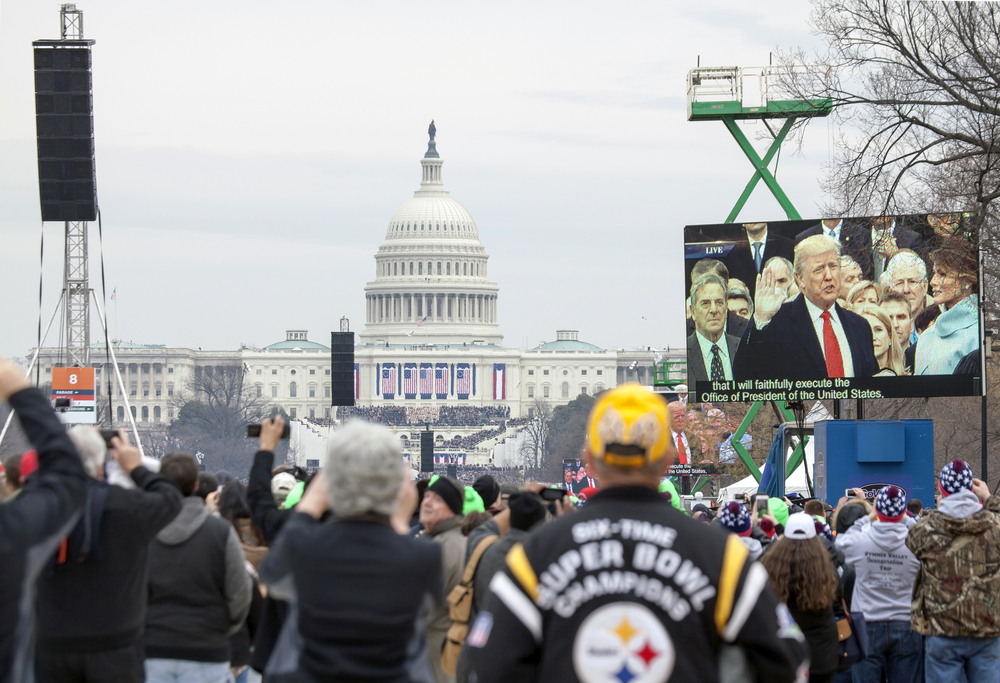 The scriptwriters planted all sorts of potential plot lines in Season 1, and they just didn’t go anywhere. Where’s the Wall? Where’s the deal with North Korea? Where’s that Rust Belt revival?
By John Feffer | December 11, 2018

Even popular series can hit rough spots in their second seasons.

Take The Marvelous Mrs. Maisel, the Amazon breakout about a young Jewish housewife in the late 1950s who improbably establishes a connection with Lenny Bruce and becomes a hilarious, foul-mouthed stand-up comedian in her own right. The first season sparkled. The second season brings together all the same elements but somehow forgot to include a plot. Mrs. Maisel herself remains marvelous; the series less so.

Trump Presidency, the reality show on Lifetime, didn’t raise the same expectations with its first season. Of course, it remained appallingly watchable: cringe TV at its finest. And the second season is ending on a cliffhanger as the revelations from the Mueller investigation have begun to crescendo. It’s still the show that we critics love to hate.

But as the second season limps to a close, even the show’s fervent fans have to admit that it didn’t break any new ground this year, except perhaps in the number of taboos smashed. When you get right down to it, nothing really happened in Season 2. It was a non-season that repeated many of the taglines and mini-dramas of the year before. The cast changed, and some new controversies emerged. But honestly, other than the episode on the mid-term elections, Season 2 lacked that essential ingredient: content.

That doesn’t bode well for Season 3, which debuts in early 2019. Who knows, maybe Trump Presidency will get cancelled halfway through. The rumors, after all, are building.

Or, to use the classic television trope, the series might jump the shark. For instance, the showrunners might decide to ramp up the trade war with China and trigger a collapse in the global economy. Or maybe they’ll choose to march the country to war with Iran. There’s nothing like patriotic gore to boost the ratings.

Sure, that’ll make for more compelling television and teach Americans a little more geography. But we viewers around the world would have to pay a steep cost. When reality TV becomes a little too real like that, I just want to put on some comfy slippers, grab a pint of Rocky Road, and change the channel to something frothy and escapist. Give me Glee or give me death!

Okay, the pilot for Trump Presidency was irresistible. Donald Trump inspired rubbernecking on a global scale: we all tuned in every morning, noon, and night to witness the man’s self-destruction as a presidential candidate. And the twist at the end of the pilot — he actually wins! — surprised even moi, the world-weariest of critics.

We tuned in for Season 1 as if it were the latest offering of American Horror Show. It was all so disgusting. And yet entertaining. So horrifying! But transfixing. It went so far over the top that even when the real American Horror Show got around to satirizing the Trump administration in its own seventh offering, it somehow seemed pallid in comparison.

That first season of Trump Presidency offered plenty of horrors: the Muslim Travel Ban, the withdrawal from the Paris climate deal, the gutting of the State Department. We watched those episodes, as they were released in real time, because we felt compelled to know what would happen next. And, of course, the media gave the series all that free advertising (there’s no such thing as bad publicity!).

Then there was the acting! The casting director brought in some truly amazing characters that first season: Michael Flynn, Steve Bannon, Sean Spicer, Sebastian Gorka, Anthony Scaramucci, Omarosa Manigault. I watch a ton of reality TV, and I’ve never encountered characters as weird as those folks. It was like some bizarre marriage of Real Housewives of Foggy Bottom and Duck Dynasty Goes to Capitol Hill. Even when Trump himself was in a funk and hiding from the cameras, this supporting cast continued to draw viewers (and boost the ratings of Saturday Night Live!).

But oh, Season 2 has been a disaster.

The showrunners did their best to liven up the program with some interesting locations. In the very first episode, they sent the president to Davos, where he received an unusually warm welcome from the global elite. The summit in Singapore with Kim Jong Un was unprecedented, though critics generally gave that episode a thumb’s down, and the meeting with the Russian president in Helsinki was at least modestly interesting from the point of view of potential treason.

But the other locations — the G7 in Canada, the NATO summit in Belgium, that short visit to the UK, the World War II commemorations in France, and then the G7 again in Argentina — were just opportunities for Trump the Grump to sulk in the public eye.

Hey, guys, that’s not good television! Remember: I can always just replay episodes of West Wing and make believe that Martin Sheen is president. Or pretend that someone blew up the entire administration — talk about draining the swamp — leaving us all with Kiefer Sutherland as the designated survivor (cancelled after two seasons: let that be a lesson to you, showrunners!).

But the real problem with Season 2 is that nothing…ever…happened.

The scriptwriters planted all sorts of potential plot lines in Season 1, and they just didn’t go anywhere. Where’s the Wall? Where’s the deal with North Korea? Where’s that promised infrastructure bill and the big turnaround in manufacturing in the Rust Belt? We were promised so much winning that we’d get sick and tired of it. Instead we got the U.S. men’s national soccer team.

Oh, and then there have been the abrupt, and frankly unbelievable, plot twists. The president promised to rein in military spending. Just one episode ago, he was talking about a 5 percent cut in the Pentagon’s budget. And then, this week, he turns around and gives those boys a whopping $750 billion, which is $17 billion more than the military’s wildest dreams for 2020.

At first, I thought it was a continuity error. Is anyone keeping notes in this administration? Forget about that other Season 1 promise: to balance the budget. Hah!

But that’s just one example. Is it me or can you can really keep track of whether Russia’s a friend or an enemy, China’s a trading partner or a cheat, and Saudi Arabia’s a bunch of murderous thugs or our best friend in the Middle East? Hey, I like a good antihero just like the next guy: Tony Soprano, Walter White, The Situation. But I’m not sure how I feel about the U.S. government hooking up with nothing but antiheros. That’s just a little too dark for my tastes. And I was a big fan of Dexter.

So, in the end, Season 2 of Trump Presidency was a mess: boring, unbelievable, and (dare I say) even disgusting. I give it a big green splat.

My Predictions for Season 3

You know that a series is in trouble when it starts replacing its cast. In Season 3, Trump Presidency will have a new UN ambassador, a new chief of staff, a new attorney general. Some spots remain unfilled, like the deputy national security advisor, or temporary like the head of the EPA. Some people still call it an administration. I call it chaos.

Politico somehow got a copy of the notes from one of the showrunners, and it’s not pretty:

Trump has offered almost nothing in the way of a legislative vision for 2019 beyond approval of a new trade deal and vague references to infrastructure. His only clear priority is enforcing border security. The White House has even sent mixed signals about its desire to fight for a criminal justice reform bill that Trump’s son-in-law, Jared Kushner, played a key role in shaping.

So, next year will be basically Season 2, warmed up and served as leftovers.

Given all the bad reviews — it’s not just me, folks — will Trump Presidency be cancelled in 2019? Maybe. But my guess is that the network is just going to let the season dribble out even as the critics pile on. After all, do you really think Pence Presidency would get better ratings?

Which leaves the jump-the-shark scenario.

Sure, a ruinous trade war with China or an apocalyptic showdown with Iran might happen. But I don’t think the showrunners will deliberately write something like that into the script. They just don’t have the imagination. Or the organizational competence to make it happen. But that doesn’t mean one or the other won’t happen accidentally.

After all, for all of its surrealistic unpredictability, Trump Presidency is reality TV. This isn’t just happening on the small screen. It’s happening out there, in an increasingly nightmarish world.

Wow, I just felt a shiver down my spine. I just realized that I can change the channel, I can even turn off the TV altogether, and Trump Presidency is still on: everywhere, all the time. Even my comfy slippers and pint of ice cream won’t save me. We’re all living in a Black Mirror episode! Ç’est une catastrophe!