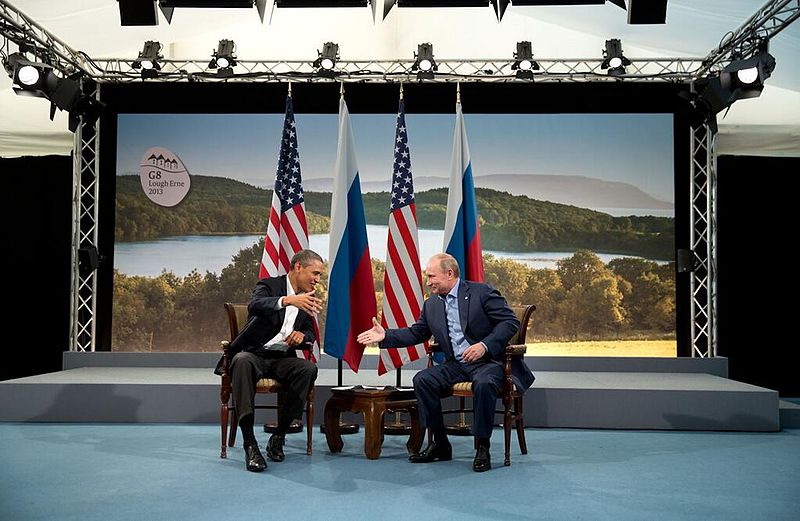 Many Russians and Americans would rather see their governments helping other countries than hurting them. That means facing some hard truths.
By Caleb Rossiter | June 30, 2015

This spring, Russian novelist Mikhail Shishkin wrote a compelling New York Times op-ed titled “How Russians Lost the War.” Reflecting on a recent “Victory Day” celebration for World War II, Shishkin argues that after the Soviet Union defeated the Nazi regime in 1945, it forced its own brand of slavery onto the countries and people of Eastern Europe.

Shishkin points out that today it’s Russia fighting a war of aggression by invading Ukraine. He criticizes President Vladimir Putin’s government and a compliant national media for wrapping the war in the mantle of history by calling the invasion another battle against fascism, and by glorifying the Russian soldier: “The patriotic hysteria on the television is the regime’s miracle weapon.”

Shishkin concludes by lamenting to his father, who fought in the Soviet Navy, “Father, we lost the war.”

By attacking his government’s foreign policy of dominating other nations, Shishkin is risking his career, the friendship of his neighbors, and even his family’s safety. Most Americans would applaud his views and his courage in expressing them. But do we have the courage to apply his reasoning to the case of the other great victor of World War II: the United States?

After all, the U.S. government brought the European powers back to Africa, the Middle East, and Asia after World War II and aided them in their wars to maintain colonial rule.

This certainly betrayed the wartime efforts of my father in the U.S. Navy. When the Europeans were finally driven out, we replaced them as a neo-colonial power, the primary provider of arms and cash to dictators who, in return, have provided us and the European powers with military bases, strategic minerals and other natural resources, cooperation on intelligence-gathering and covert operations, and opportunities for trade and investment.

Our current war — the one the Pentagon calls the “long war” and former CIA deputy director Michael Morell calls “the great war of our time” — is a struggle for control of the Muslim world. We pursue victory through alliances with friendly dictators, military attacks on uncooperative ones, and aerial assassinations of the militants who have responded with violence to our many decades of domination of their ummah, the Muslim homeland that stretches from Morocco to Indonesia. As in Russia, our government and a compliant media invoke World War II by labeling the militants “Islamo-fascists” and lionize our troops as humanitarian warriors, above politics.

Check out the military recruitment ads that proclaim America’s Navy “a Global Force for Good,” or claim that “Marines move toward the sounds of tyranny, injustice, and despair.” Except, of course, when the Navy bases its Persian Gulf fleet in the tyrannical kingdom of Bahrain, and the sounds of injustice and despair are the bullets being fired at pro-democracy demonstrators by U.S.-trained soldiers using U.S.-supplied guns. Corporations get in on the act by sponsoring displays at virtually every professional sporting event that ask us to thank our troops for defending our freedom.

Our self-congratulatory fairy tale obscures an understanding of our history and traps us in a cycle of domination and war. When Somalia’s Islamist militias terrorize Kenya, murdering hundreds of innocent students and shoppers, we are unable to see how this tragedy traces back to 1979, when President Jimmy Carter armed and funded a brutal Marxist dictator in Somalia in return for military bases to use in the long war of the time. The uprising against the dictator eventually left the country in a state of anarchy, rent apart by competing militias and a growing Islamic extremist movement. We then armed and provided military and covert support to Kenya and Ethiopia when they invaded Somalia to replace the militias. Somalia’s imported government now controls only those parts of the capital city occupied by U.S.-funded African Union troops.

Al-Shabab, the primary Somali Islamist militia, explicitly claims that its recent attacks in Kenya are in retaliation for the U.S.-backed Kenyan invasion of Somalia, just as al-Qaeda explicitly claimed that the 9/11 attacks were in retaliation for U.S. support of the dictators in Egypt and Saudi Arabia. Are we able to hear them? Do we understand that we’re being attacked because we’ve been dominating Muslim countries, choosing and maintaining their dictators, for 50 years?

Former Texas Congressman Ron Paul expressed this analysis when he ran for the 2008 Republican presidential nomination, leading another contender — former New York Mayor Rudy Giuliani — to vilify him for “blaming America” and demand a “retraction.” That may have been the last time the mainstream media covered a discussion of our hushed-up reality of domination. Let’s hope that upcoming debates in the Republican presidential primary between Paul’s son Rand and super-hawk Lindsey Graham will offer more such moments.

Taking a more recent tragedy, do we understand our role in Libya — another Islamic country we reduced to chaos, this time under President Obama? Militias there extort money from desperate refugees to allow them to shove off in overcrowded boats into the Mediterranean, where they often drown trying to reach Europe.

It’s a tangled a web we weave once we start choosing friendly dictators. In 2012, former Libyan government soldiers joined Islamist militias we’d illegally pushed from elected power in Algeria (when the U.S. backed a 1991 coup, sparking a civil war) and seized half of Mali from a U.S.-trained Army captain who’d only shortly before seized power himself. Obama is virtually guaranteeing future Somalias, Libyas, Algerias, and Malis by continuing America’s 70 years of “iron-clad” security guarantees to the Persian Gulf dictators, despite those regimes using the weapons we exchange for military bases, oil, and covert cooperation to mow down pro-democracy demonstrators.

One of America’s leading anti-imperial activists, Mark Rudd, has explained his participation in 1970s “armed propaganda” property bombings by the “Weatherman” group as a reaction to the invasion of Vietnam, and as a way to discourage other subversions of foreign governments. Rudd says that while he now knows the bombings were wrong, “part of the Weatherman phenomenon that was right was our understanding of what the position of the United States was in the world. It was this knowledge that we just couldn’t handle. It was too big. We didn’t know what to do. In a way I still don’t know what to do with this knowledge. I don’t know what needs to be done now, and it’s still eating away at me just as it did 30 years ago.”

We should think about Rudd’s understanding of our own global role as we applaud Shishkin’s critique of the Russian government’s misuse of history to justify its aggression and domination today. In both America and Russia there are many citizens who want to see their governments helping, not hurting, people in other countries. But both countries are awash in propaganda that claims the moral high ground for the empires by claiming to do exactly that. The more we dare to join Shishkin and Rudd in questioning the imperial narrative, the sooner we’ll reach citizens in both countries who might oppose their respective empires if they realized they had one.

Caleb Rossiter is the director of the American Exceptionalism Media Project (www.aemp.us).