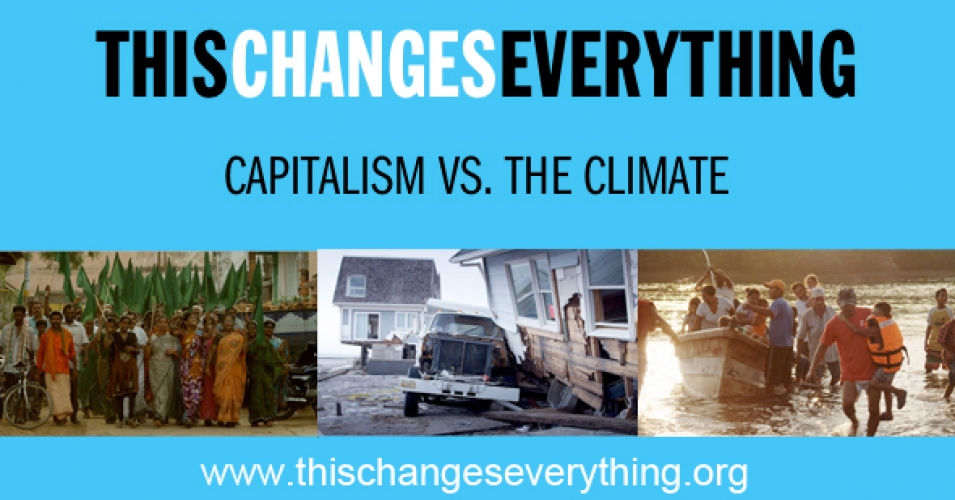 Naomi Klein's "This Changes Everything"

This Changes Everything: A Simpler Solution to Climate Change

Even if climate science is complicated, author Naomi Klein wants you to know that finding a solution to global warming is easy.

In her powerful new book, This Changes Everything: Capitalism vs. the Climate, the Canadian globalization expert drills through the noisy climate debate and finds that humanity has no choice but to ditch its fossil fuel-driven global economy for a local model powered by renewable energy.

Out with oil, gas, and coal. In with wind, sun, small-scale hydro, and other things that don’t make the climate problem worse. Period.

Throughout the book, Klein sticks to her promise to stay out of the scientific weeds. And she doesn’t force readers to bone up on complicated programs — like the Clean Development Mechanism and REDD+ — that are currently failing to reduce the carbon that factories, cars, trucks, and massive farms are belching into the atmosphere.

For Klein, only “a mass movement capable of taking on powerful polluters” can end the madness of increasingly toxic fossil fuel extraction. Without broad-based mobilization, revamping the economy to veer off today’s course toward cataclysmic floods, fires, and drought may prove impossible.

Official efforts to slow global warming, she explains, took “what began as a straightforward debate about shifting away from fossil fuels and put it through a jargon generator so convoluted that the entire climate issue would seem too complex and arcane for non-experts to understand.”

That “jargon generator” also obscures the fact that most climate efforts cling to the lie that everyone can win in this struggle — from ExxonMobil and Shell to the polar bears and caribou.

That arrangement, often called “cap and trade,” lets companies keep on polluting in exchange for paying off someone else to refrain from, say, chopping down a forest on a remote island. Not only does selling the right to pollute not work, it can disrupt low-carbon lifestyles that are doing the least to stoke climate change.

The fact is that climate-altering carbon emissions are still climbing after 25 years of global climate negotiations. They attained record levels in 2013 despite rapid growth in the generation of electricity from wind and solar power.

“The failure of this polite strategy is beyond debate,” Klein declares. Yet politicians, bureaucrats, and billionaires won’t let go of it.

Klein’s fly-on-the-wall view of a “geoengineering” conference is one of the book’s most chilling passages. For the uninitiated, that’s the “science” of manipulating the weather by tampering with clouds or the ocean. Geoengineers want to “hack the planet” because they believe human beings can reverse the warming effects of all that excess carbon by, say, simulating volcanic eruptions.

She dismisses this “geoclique” (Klein sometimes coins her own jargon) as “crammed with overconfident men prone to complimenting each other on their fearsome brainpower.” And she rejects that notion that Richard Branson — who promised to spend $3 billion fighting climate change and wound up investing less than $300 million — or any other “green billionaire” will save the day.

Klein has more faith in the people on the frontlines of the new climate movement, and meets up with them everywhere from Greece to Montana. Many of these folks who are defending their homelands from increasingly extreme forms of drilling, mining, and burning will participate in what’s certain to prove the biggest climate demonstration to date in New York City.

While Klein does call for overhauling the entire global economy — no minor challenge — and rejects most market-based climate fixes, she doesn’t shoot down all financial responses to climate change.

“There is plenty of room to make a profit in a zero-carbon economy,” she says. The solutions Klein favors would reduce inequality and make the economy generally more equitable. She also embraces efforts to get institutions and individuals to divest from their oil, gas, and coal holdings while investing in more sustainable energy options.

But, Klein warns: “The profit motive is not going to be the midwife for that great transformation.” Instead, it will take millions or even billions of people working together.