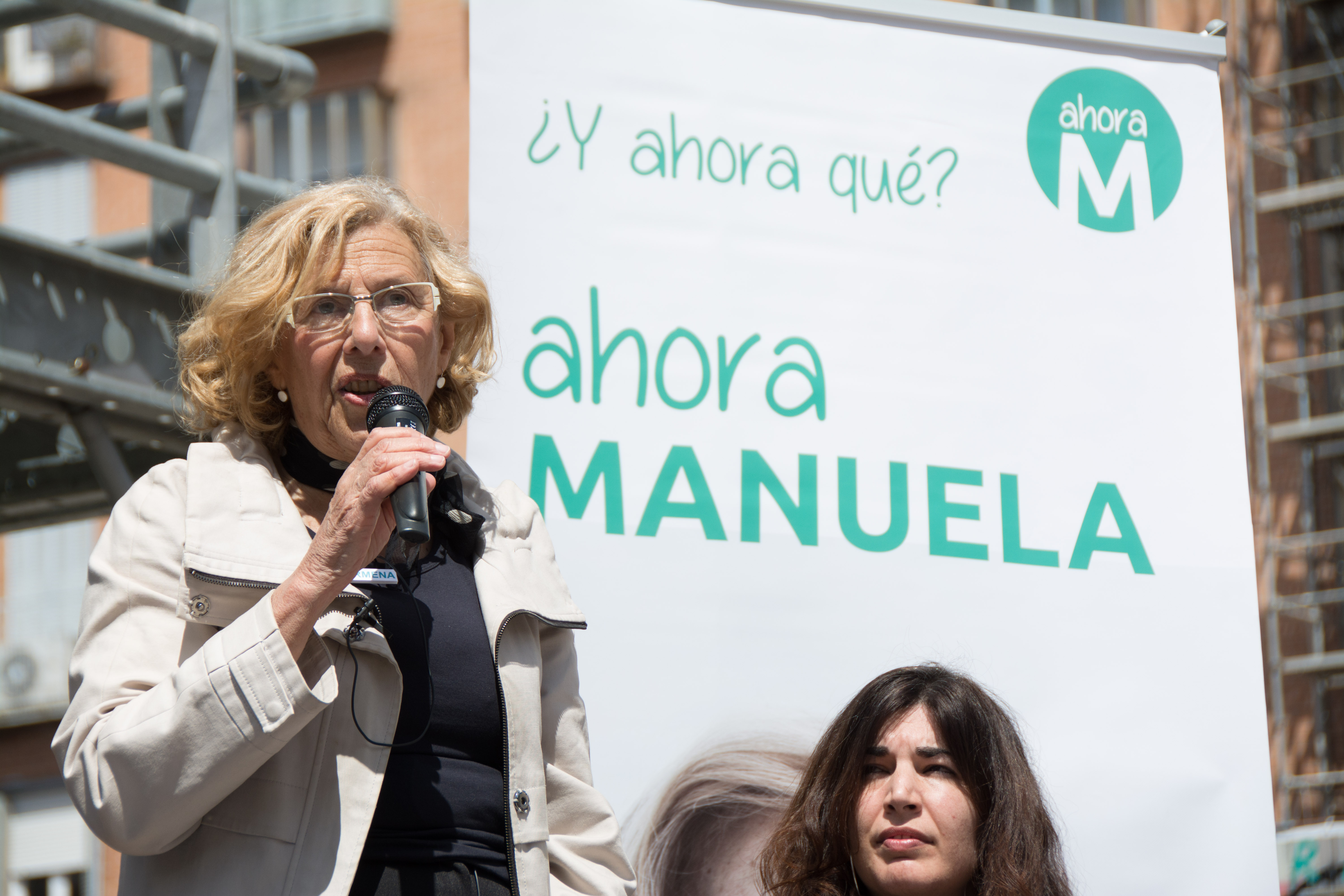 Imagine that the Occupy Movement stood for election in New York and won, or that anti-gentrification activists took over the city hall in San Francisco. That’s what just happened in Spain, where citizens’ groups with roots in the anti-austerity indignados movement performed so well in recent municipal elections that they now lead governments in the country’s three largest cities — Madrid, Barcelona, and Valencia — along with several others.

The epicenter of this political earthquake is Barcelona, where the new mayor is Ada Colau, former spokesperson as the Mortgage Victims Platform, or PAH. She stood as the candidate for a newly formed citizens’ platform called Barcelona in Common (Barcelona en Comú), whose immediate priorities for the city include stopping foreclosures.

The capital, Madrid, had been governed by the right-wing People’s Party (PP) for 24 years, but the new government is led by another citizens’ platform called Ahora Madrid, which came a close second in the elections and succeeded in securing enough votes from other parties to form the city government. The new mayor is Manuela Carmena, a 71-year old former judge who cut her political teeth opposing the Franco dictatorship in the 1970s.

Radical citizens’ coalitions or “popular unity” candidates now also now lead city administrations in Zaragoza, A Coruña, Pamplona, Cádiz, and Santiago de Compostela. All of these involve candidates from Podemos, an anti-austerity party founded in 2014. But the impetus mainly comes from the social movements that took over public squares across Spain in May 2011.

Some of their first acts have been symbolic, including the new mayor of Cádiz’s much-publicized replacement of a picture of the former king with that of a 19th century anarchist republican. The new council of Madrid has given up its boxes at the city’s bullfighting ring and royal theater, as part of a manifesto pledge to cut expenses.

In Barcelona, Colau’s first interventions have also symbolized a clear break with the neoliberal, tourism-at-all-costs “global city” model of previous administrations. She made international headlines by promising to withdraw a €4 million subsidy given to the race circuit that hosts the Spanish Grand Prix, suggesting that the money could instead restore school meal subsidies for poor families. Barcelona in Common has also promised to review the lease of the Port Vell Marina, which has recently been converted to accommodate the luxury yachts of the world’s super-rich in the heart of the city.

In Madrid, meanwhile, scenes of panic were reported at the Club de Campo Villa de Madrid, a high-society country club built on city-owned property, when Manuela Carmena promised to re-designate the area as a public park.

The right to housing

Behind the symbolism, though, the first priority of many of Spain’s new mayors is to end home foreclosures. In her first day on the job, Colau intervened to stop an eviction in the poorest district of Barcelona, while promising to look for “a more stable solution.” The mayor of Cádiz and four of his councilors were dragged away by police while attempting to prevent a foreclosure.

There have been close to half-a-million home evictions in Spain — a country of around 18 million households — since the economic crisis hit in 2007. The victims were caught up in a housing bubble, fueled by sub-prime lending and a construction boom.

With the onset of the crisis, the construction industry ground to a halt, leaving over 3 million empty properties and many more half-finished, which precipitated the collapse of many of the banks that had financed Spain’s building boom. At the same time, with successive governments pursuing harsh austerity measures, the labor market fell off a cliff, with unemployment peaking at close to 27 percent in 2013. Many of those who lost their jobs lost their homes soon after. But under Spanish law, they must still pay back the lender even after foreclosure.

The rise of the PAH, with Colau as its spokesperson, came in response to these foreclosures on an industrial scale. The group adopted militant tactics: physically blocking evictions, occupying bank branches, surrounding the homes and workplaces of politicians, and squatting in empty housing developments. Since its inception, the PAH has successfully blocked over 1,000 evictions and negotiated debt cancellations for many households.

The PAH also pursued legislative initiatives and legal challenges to Spain’s housing law, with limited success. With prominent allies in city halls now, that could change.

One option to address evictions is to establish a public office that would negotiate agreements between banks and defaulters — a model that’s been successfully tried in the Spanish Basque country. It may also be possible for the city council to be given first refusal on the purchase of evicted properties, which it could then rent out to the evictees or other tenants. Zaragoza in Common has proposed a hybrid of these schemes, setting up an anti-foreclosure office and asking banks to make empty housing available for social housing at affordable rents — a proposal that’s received a positive response from some major banks. Ahora Madrid is considering similar proposals.

In advance of such measures, one thing that’s already changed is the attitude of property speculators. The day after the election, a private investment firm that less than a year ago spent €90 million on a site for a proposed Four Seasons hotel in Barcelona announced that it was abandoning its plans.

Then, on May 30th, a high-level conference of bankers, private equity firms, and investment funds in Madrid was reported to have become an impromptu debrief for firms concerned about the future of their Spanish investments. The new mayors of Barcelona and Madrid have backed the PAH in pledging to fight off vulture funds that have bought up large portfolios of rented properties from the city council and bailed out banks, hiking up rents and evicting tenants.

The priority given to stopping foreclosures is just one element of the “emergency plan” that Barcelona in Common announced that it would implement in its first months in office.

Other flagship measures include a review of contracts for sub-contractors working for the municipality (whose terms of work are often highly precarious),  stopping the privatization of daycare, handing out fines to banks that leave multiple properties empty, refusing to grant new hotel licenses, and subsidizing energy and transport costs for the unemployed and those earning under the minimum wage. Colau has already appointed a new city police chief with a mandate to reform the “bad practices” of the city police force, and promised to review the contracts of multinational service providers. Similar provisions are planned in other cities where “popular unity” candidates lead the government.

The new council will also employ fewer political appointees at lower salaries than their predecessors. Colau herself will take home €2,200 per month — compared with the €8,800 paid to her predecessor Xavier Trias — in accordance with Barcelona in Common’s crowdsourced code of ethics, called “governing by obeying.” In Madrid, Manuela Carmena has promised to halve the nearly €100,000 annual salary of her predecessor.

Passing these measures through councils that require cross-party support won’t be easy, with the fragmentation of Spain’s two-party system and resurgent nationalism in some parts of the country meaning that city halls across Spain are now ruled by minority administrations. Nowhere will that be more difficult than in the Catalan capital, where Barcelona in Common holds just 11 seats in the 41-member city council. It’s dependent upon the support of most of the councilors from two center-left parties and a smaller, left nationalist bloc.

The experience of building an electoral coalition out of social movements lends itself to a more nuanced conception of power than just the forging of political pacts, however. In her first press conference after the election, Ada Colau affirmed that she would talk to all left and center-left parties, but stressed that she would continue to attend neighborhood assemblies from the civil society groups that helped propel her to power.

The clear message is that Barcelona in Common will look to active social movements and associations as a means to win legitimacy for its proposals, which would then put pressure on other parties to allow it to pass legislation. That’s a marked shift from the usual model of horse-trading between parties behind closed doors.

Taking control of Spain’s largest cities is just the start of a journey that leads to general elections in November.

Along the way, Barcelona will go to the polls again in September, when regional elections will be held in Catalonia. The regional government, a nationalist coalition led by CiU (Convergència i Unió, or Convergence and Union), can currently block attempts by Barcelona in Common to expand public health and education facilities in poorer neighborhoods since it plays the lead role in providing these services.

CiU is a coalition of two parties, who have governed Catalonia in a pact for most of the period since 1980. But that coalition is in disarray. The coalition held for as long as it was winning elections and leading polls, but on June 17 the two parties split.

That leaves an opening for the left in Catalonia. A region-wide coalition of the groups that joined Barcelona in Common is currently under discussion. If the talks are successful, they could produce a popular unity list with a viable shot at becoming the largest bloc in the regional parliament.

Success in regional elections would open the way to a bigger prize. A strong showing for the left in Catalonia — Spain’s second most populous region and a former stronghold of the Socialist Party — is vital if the left is to triumph nationally. The prospect of a popular unity platform for Spain’s general elections is now being openly discussed. The leadership of the United Left, wiped out when standing against popular unity coalitions but increasing its representation when incorporated within them, is virtually pleading for a pact. Equo, the country’s Green party, is similarly open to a common list.

These calls are increasingly find an echo within Podemos, too.  Pablo Echenique, one of the party’s first members of the European Parliament and its regional leader in Aragón, and 22 prominent activists have also called on Podemos to embrace pluralism and open the party to electoral pacts in the general election. Pablo Iglesias, the party leader, has opened the door for joint candidacies with other parties, but only in three of Spain’s 17 regions (including Catalonia).

Calls for unity are obviously far easier to make than to achieve, but they could be heard if they help to create a bloc that could outflank the center-left Socialist Party in the general election. That would be enough to fundamentally reshape the politics of Spain, claims Iglesias. Even if the conservative People’s Party remained the largest single party, Podemos could negotiate from a position of strength. As Iglesias puts it, the Socialists would be forced into a choice of either “undertaking a 180-degree turn and rejecting austerity policies, so that we could reach an understanding with them… or commit political suicide by submitting to the PP.”

It’s a tantalizing prospect for the fall, but for now Spain is entering the summer still reveling in its democratic spring.

Oscar Reyes is an IPS Associate Fellow and is based in Barcelona. He regularly tweets on Spanish politics @_oscar_reyes