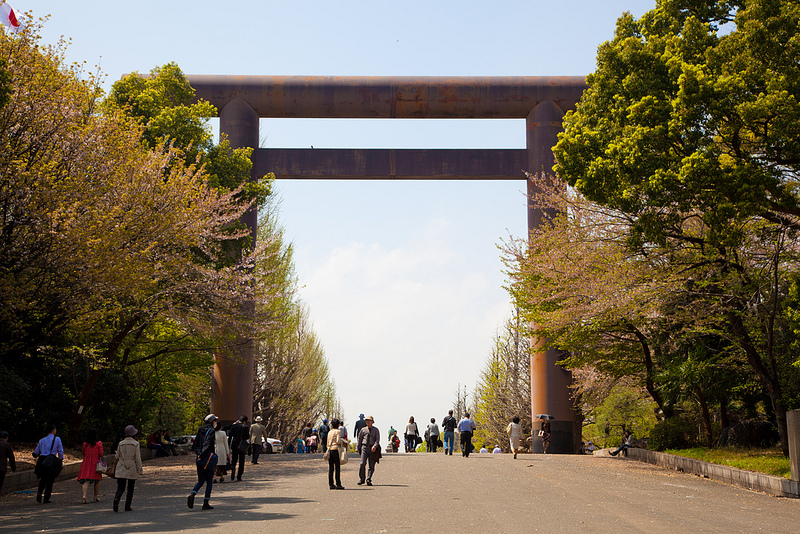 The giant tori gate outside Japan's Yasukuni Shrine, a tranquil Shinto shrine in Tokyo that has stoked controversy for housing a museum that airbrushes and revises Japanese war crimes during the Second World War. Nationalist Prime Minister Shinzo Abe visited the shrine in December, drawing outrage from China and Korea. (Photo: camknows / Flickr)

I passed through an enormous tori, the traditional gate in front of Shinto shrines. In the courtyard, white-clad Shinto priests walked quietly back and forth. A flock of white doves, specially bred on the site, pecked at the ground and then took wing at the prodding of a photographer. I visited the strolling garden and the sumo ring.  I examined the ema, the small wooden plaques that worshippers hang at the shrine to send their wishes to the kami, or spirits.

More than a decade ago, I was enjoying my visit to Yasukuni Shrine, a tranquil oasis in busy Tokyo, when my attention was suddenly attracted to several large objects lying on the ground outside the museum within the shrine complex. One of the objects was a kaiten. During World War II, the Japanese Army developed this manned torpedo for suicide missions. It was an ominous sign. Inside the museum, the Yushukan, the curators presented a sanitized version of Japan’s wartime conduct that celebrated sacrifice and ignored the less savory elements. There was no discussion of atrocities like the Nanking massacre or the drafting of women into sexual slavery or the chemical weapons experimentation. Indeed, at a book table on the ground floor, I scanned the titles of several publications that exposed these “myths.”

The Yushukan has generated its share of controversy. But Yasukuni Shrine has attracted far more criticism for the 14 “Class A” war criminals whose spirits have been enshrined there, including wartime leader Hideki Tojo.

Most controversial of all — and what thrusts Yasukuni periodically into the headlines — are the visits to the shrine by Japanese prime ministers. Such visits deeply offend Japan’s neighbors China and Korea, for they imply an unapologetic approach to history. In 2008, then-Prime Minister Yasuo Fukuda broke with tradition by skipping the customary visit in August on the anniversary of Japan’s surrender in World War II. “The nation inflicted significant damage and pain on many countries, especially on people in Asian countries,” Fukuda said at the time. “Here I express, on behalf of the nation, deep remorse and humble condolences for all of the people who fell victim.”

Japan’s current prime minister, however, is not big on apologies. Shinzo Abe is a right-wing nationalist who wants to revive Japan as a “normal” military power. He has been brusque in his rhetoric and his actions. At the end of December, his government announced a major increase in military spending of 5 percent over the next five years, which will include purchases of 28 U.S. F-35s and two Aegis-equipped destroyers. Japan under Abe has more aggressively asserted sovereignty over the Senkaku/Diaoyu Islands that China also claims, pledging to use force against Chinese patrols and rejecting any compromise on the islands’ status. On the home front, his administration has pushed through textbook revisions that offer the same airbrushed treatment of Japanese history that the Yushukan displays.

Just in case anyone was in doubt of his intentions, Abe made his own high-profile visit to Yasukuni Shrine on December 26, the first time for a Japanese prime minister in seven years. Even given Abe’s political orientation, it was an unusual time to make such a visit. There is no election pending. He doesn’t face any challenges from the hardline conservatives in his party. And December 26 doesn’t represent any significant anniversary in Japanese history.

The real reason for Abe’s visit, which elicited predictable outrage from Korea and China, was that he felt that he could get away with it. Japan’s neighbors, after all, have engaged in their own provocations. The month before, China had unilaterally declared its Air Defense Identification Zone. South Korea, under President Park Geun-hye, has reinforced its own claims to the Dokdo/Takeshima islands also claimed by Japan, sending a new coast guard vessel to patrol the waters in that area.

The Yasukuni visit was a signal that Abe would not really take into consideration the sentiments of Japan’s allies — or its adversaries — when developing its own foreign policy. For the last two decades, with the considerable encouragement of Washington, the Japanese foreign policy and military elite has been gradually shrugging off the constraints imposed by the “peace constitution.” Abe knows that the barriers are high for ridding the constitution of its famous Article 9 (by which Japan renounces war as a means of settling disputes). It’s much easier to make an end run around the constitution, as his predecessors have done by knocking out one prohibition after another — against weapons exports, against participation in UN peacekeeping, against the militarization of space, and so on.

The visit is also a signal to the Japanese public that the Abe administration is willing to play hardball on the home front. The recent deal to push forward the base restructuring in Okinawa is a case in point. Washington and Tokyo have been trying for more than 15 years to figure out a way to close down the aging Marine Air Force base in Futenma and build a replacement facility somewhere else on the island. For years, the residents of Henoko, the target of the base relocation plans, have fought back, with the support of their mayor. Until recently, they also had the governor of Okinawa on their side as well.

But at the end of December, Governor Hirokazu Nakaima buckled. The pressure from Tokyo — plus 300 billion yen a year for the next eight years for the Okinawan economy — made him break his campaign promise to oppose base relocation on Okinawa. Washington hailed the agreement as the final resolution to the problem.

But Washington shouldn’t begin the victory celebrations quite yet. In elections this upcoming Sunday, the current mayor of Nago, which has jurisdiction over Henoko, is running for a second four-year term. Susumu Inamine has pledged to continue his opposition to the base. In addition to this political challenge, citizens groups continue to file suits to block base construction on the grounds of the environmental damage it would cause. And despite the monetary incentives dangled by Tokyo, the vast majority of Okinawans still reject the plan.

All of this leaves the “Pacific pivot” in limbo. Half the Marines at Futenma are slated to move to Guam, Hawaii, and Australia. But it’s the insistence to keep a large contingent of Marines on Okinawa — a parochial obsession of the U.S. Marine Corps that has become an unmovable U.S. demand — that has been the core of the dispute. It doesn’t matter that the Air Force already has a huge base on Okinawa that provides the United States with all the air power it needs. It doesn’t matter that sufficient Marines will be stationed in the region to respond to any contingency. The services are always reluctant to give up anything for fear that they will lose even more when the inevitable belt-tightening begins.