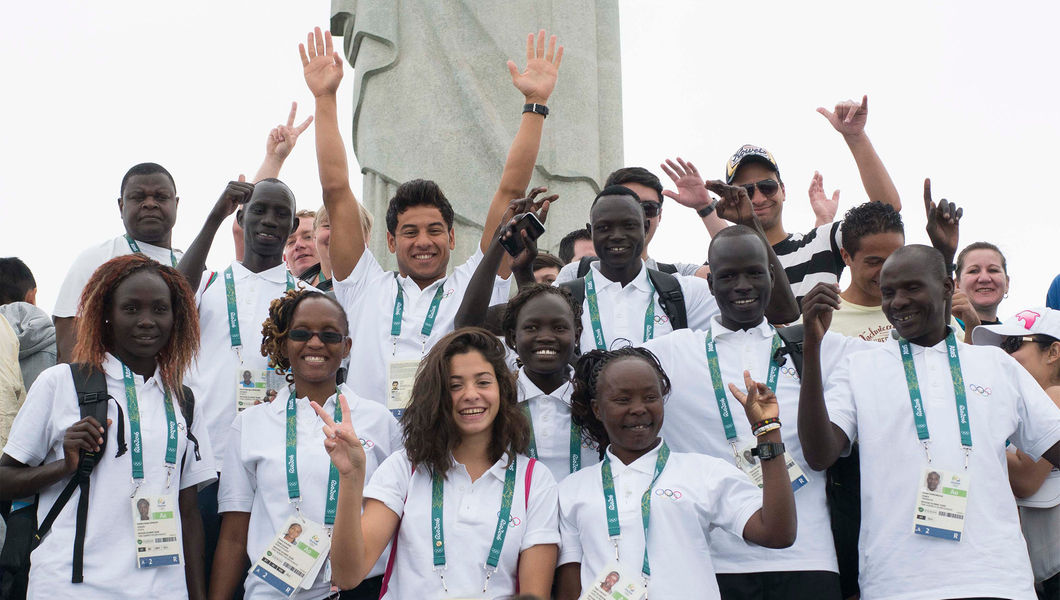 Team Refugee and the Normalization of Mass Displacement

As refugees take the Olympic stage, the wars that sent them running for their lives continue apace.
By Phyllis Bennis, Kareem Faraj | August 12, 2016

It was after midnight when the small refugee Olympic team strode into the stadium in Rio, the very last before host country Brazil’s huge contingent danced in to the samba-driven opening ceremonies. Ten amazing athletes, originally from four separate countries but sharing their status as unable to return home, marching under the Olympic flag.

It was an extraordinary sight — moving and powerful far beyond the cheering for the national teams.

Some of them — the young Syrian swimmer Yusra Mardini in particular — had become familiar to many, her story told and retold in the run up to the games. It was an amazing story indeed. She and her sister, both top swimmers in their native Syria, had been forced by the brutality of the civil war to flee. Like so many hundreds of thousands before and after them, they managed to find places on an overcrowded rubber dinghy for the last leg from the Turkish coast to safety in Greece.

But also like so many before them, they found the boat overcrowded, taking on water, and in danger of sinking altogether. Mardini and her sister, along with the one other person on board who knew how to swim, jumped overboard and swam the three and a half hours alongside the boat, lightening the load just enough that the boat — and its exhausted accompanying swimmers — made it to safety, landing on the rocky coast of Lesbos.

The others — five runners from South Sudan and one from Ethiopia, another Syrian swimmer, and two judo competitors from the Democratic Republic of Congo — had powerful and inspiring stories of their own. All of them had faced the loss of home, family separations, and despair. Their athletic prowess, strong enough to bring them to international stature despite all they had lost, and despite the grinding poverty in which many of them grew up, brought them to Rio.

It’s all been a moving and powerful exemplar of what the Olympics are supposed to represent, but rarely achieve: the celebration of individual athleticism, beyond national borders.

And yet, what does it say about our world of wars today that massive refugee flows — and the conflicts that cause them — have become so normalized that war refugees now constitute the equivalent of a nation?

There are 65 million forcibly displaced people desperately seeking safety around the world — the highest number since World War II. That’s about equal to the population of France, Thailand, or the United Kingdom, and greater than Italy, Spain, or South Africa. Together they give what might be called the Refugee Nation the 23rd largest population in the world.

Have our world’s wars become so normalized that the Refugee Nation will now be routinely granted institutional representation, maybe even beyond the Olympics?

Most of the numbers, let alone the real lives behind them, remain out of the reach of understanding. If we look at just those refugees arriving in Europe alone last year, the highest number, 360,000, were fleeing the civil war in Syria. The next three highest groups were all from countries where U.S.-led wars, bombing campaigns, and occupations had left behind violence, instability, and dispossession. Those three — Afghanistan with 175,000, Iraq with 125,000, and tiny Kosovo, from which 60,000 refugees fled last year — together match the numbers fleeing Syria.

Those refugees are direct casualties of the foreign policies of Washington and its allies in Europe: military intervention (whether in the name of “the war on terror” or “humanitarian intervention”), economic exploitation, diplomatic abandonment, and more. And they’re part of an even longer legacy of failure. Some of those 65 million, like the 6.5 million Palestinians, have been refugees for three or four generations. Others are among the millions of Afghan refugees in Pakistan, or Iraqi refugees in Iran, who arrived years ago in response to U.S.-led wars and still cannot go home.

Nor is the problem limited to Europe and the Middle East. Sub-Saharan Africa hosts 26 percent of the world’s refugees, but we hear little about them because few make it out of Africa to land on European shores. They’re displaced by wars often fought with U.S. or other Western weapons, or by humanitarian or climate-driven crises ignored by Western powers until public outcry demands that “something” be done — and that “something” is often more military intervention or arms sales.

Those same powers fail to take responsibility to find shelter for displaced and vulnerable people, or to invest in the kind of serious diplomatic solutions that the disasters require. The wars continue, and the refugees keep coming.

To be sure, prolonged and violent conflict is nothing new. But as the great Pakistani scholar Eqbal Ahmad explained, speaking on the eve of the first U.S. war against Iraq in 1991, conflicts are often only elevated to “world wars” — with all the urgency for resolution that entails — when they’re fought among the powerful: Americans and Europeans.

The seventeenth, eighteenth, and nineteenth centuries witnessed the genocidal destruction of grand civilizations: the great Mayas, Incas, Aztecs, and the Indian nations of North America; the conquest and subjugation of the rest of humanity. Eventually, even India was colonized; so was China, all of Africa, and ultimately the Middle East.

Finally the wars of greed and expansion came home to roost. The colonial have-nots of the West took on the haves. Europeans fought a war among themselves, called it a World War, and gave it a number: One. It was a devastating conflict in which air and chemical warfare were introduced…. Then the West fought another World War and gave it the next number: Two.

Just look at the Congo, from which two athletes now compete for the refugee team.

The Democratic Republic of the Congo has been at war for some two decades. The war morphed into a regional conflict, in which national armies and numerous militias based in the surrounding countries all staked out their interests and launched their own sections of the Congolese war. No one knows for sure, but the best estimates are that about 6 million people have been killed in the war. And the killing hasn’t stopped.

Many have called it Africa’s World War. But it never was recognized as such in the West. Instead, just one more conflict among black Africans, of non-Europeans whose wars would never count as a World War Something, because virtually no Westerners are among the dead.

Perhaps now, in the age of the “Global War on Terror,” it’s different. Maybe now it just requires that the victims include at least some Europeans and Americans to qualify for “world” status.

Though President Obama rejected the “Global War on Terror” label in favor of the anodyne “overseas contingency operations,” the conflict remains global, and it remains a war. The war stretches from Syria and Libya to Iraq to Afghanistan, and in a drone war stretching from Yemen to the Philippines. It’s a brutal military battle of conventional weapons — including B-52 bombers, the nuclear-capable Vietnam-era behemoths capable of dropping 70,000 pounds of gravity bombs that are now flying over Syria.

No one even claims that the bombs we’re dropping over Syria are “smart.” And no one except the grieving families even try to count those they kill.

Even as members of Team Refugee win their Olympic heats, the wars that sent them running for their lives and that populated the Refugee Nation continue apace. Streams of refugees trying to cross the Mediterranean or traipsing across African deserts merge until they become one. As do our wars.