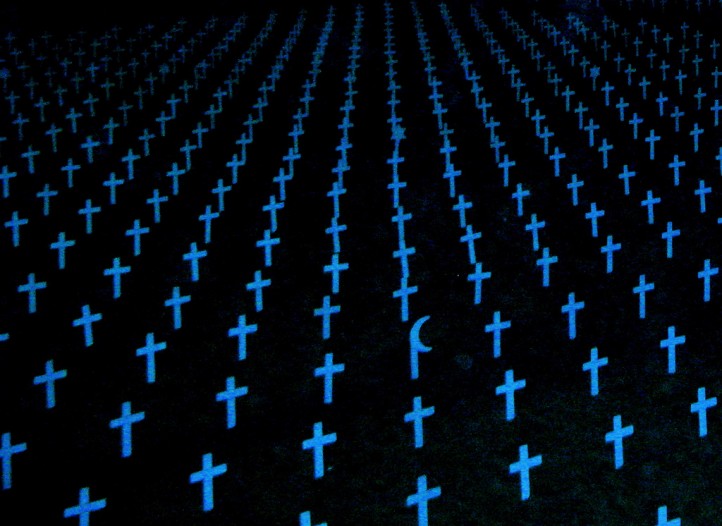 Millions of Americans will spend Memorial Day at community picnics, family barbecues or local parades. “Thank you for your service” will be a ubiquitous phrase.

Despite that annual refrain, we’re very far from honoring our veterans. Though drone strikes and bombing campaigns have reduced casualty figures (in fact, more people have died in school shootings this year than in the military), too many of our young women and men still come home from our wars destroyed physically and devastated emotionally.

In addition to grievous bodily injuries, many come home suffering from trauma, addiction and moral injury — the sense, as Veterans for Peace Director Michael McPhearson explains, that “you’re not really standing on stable moral ground” after you’ve been ordered to kill people. At home they confront an overburdened veterans’ health system, which the administration wants to make worse by privatizing.

The numbers are staggering. Tens of thousands of U.S. troops — 100,000 or more at time — have served in Afghanistan alone. At almost 17 years on, it’s our nation’s longest war. Some 15,000 troops are still deployed there.

Yet does anyone other than their families even think about them?

Numerous military and political leaders have acknowledged that the Afghan war is unwinnable, yet the deployments continue. Meanwhile, Afghans — children, old people, journalists, wedding parties — continue to die. Some are killed by U.S. airstrikes, others by Afghan government or opposition forces. The killing goes on because we help perpetuate a permanent war that almost everyone agrees cannot be won.

But it’s not just U.S. troops and Afghans who pay for this folly. The rest of us do, too — more dearly than many realize.

The Pentagon says the war in Afghanistan will cost us $45 billion this year alone. If we didn’t spend that money on an unwinnable war thousands of miles away, what could we do with it instead?

For starters, we could hire 556,779 well-paid elementary school teachers in struggling states like Oklahoma, Kentucky and West Virginia, where teachers have protested abysmal conditions. Or create 809,999 new well-paid jobs to rebuild infrastructure like the broken water system in Flint, Michigan.

Or provide 4.36 million veterans with health care. Now that would be something.

And that’s just for one year of one war. All told, our full $700 billion-plus military budget sucks up 53 cents out of every discretionary dollar in the federal budget — compared to just 15 cents for poverty alleviation. Our troops and Afghan civilians pay the price, but so do the 140 million Americans living in poverty or with very low incomes.

When people talk about universal health care, education, infrastructure and debt-free college, the conversation usually ends with “too bad we can’t afford it, we don’t have the money.”

But that’s not true. We have plenty of money — the United States is the wealthiest country in the history of the world. What we don’t have is a moral compass that recognizes that spending more than half of the available funds on a giant military mired in wars that don’t keep us safe is wrong.

Remember those school kids who said “no more thoughts and prayers” after mass shootings? They’re demanding action. So let’s take a page from their book. For next Memorial Day, let’s say “No more thank you for your service.”

Instead, we need action, and a new moral compass — one that recognizes that the best way to honor our veterans, keep people safe, end poverty, and fund jobs, education and health care for veterans and everybody else is to end the wars.

This spring, we helped launch a new Poor People’s Campaign to revive the movement against what Rev. Martin Luther King Jr. 50 years ago called the “evil triplets” of racism, materialism and militarism. And for the next few weeks, people are holding actions in at least 30 state capitals and the District of Columbia to start bringing our war dollars home to build a just new economy. Check out poorpeoplescampaign.org to find out about events happening near you.

The cost of our military is creating a national moral crisis, where our priorities are skewed, vulnerable communities are threatened, and our veterans aren’t being honored. This year, let’s honor them with action. Let’s end the wars.

The Rev. William Barber Jr. is president of Repairers of the Breach and co-chair of the Poor People’s Campaign. Phyllis Bennis is a fellow of the Institute for Policy Studies and co-author of the IPS-PPC report “The Souls of Poor Folk.”