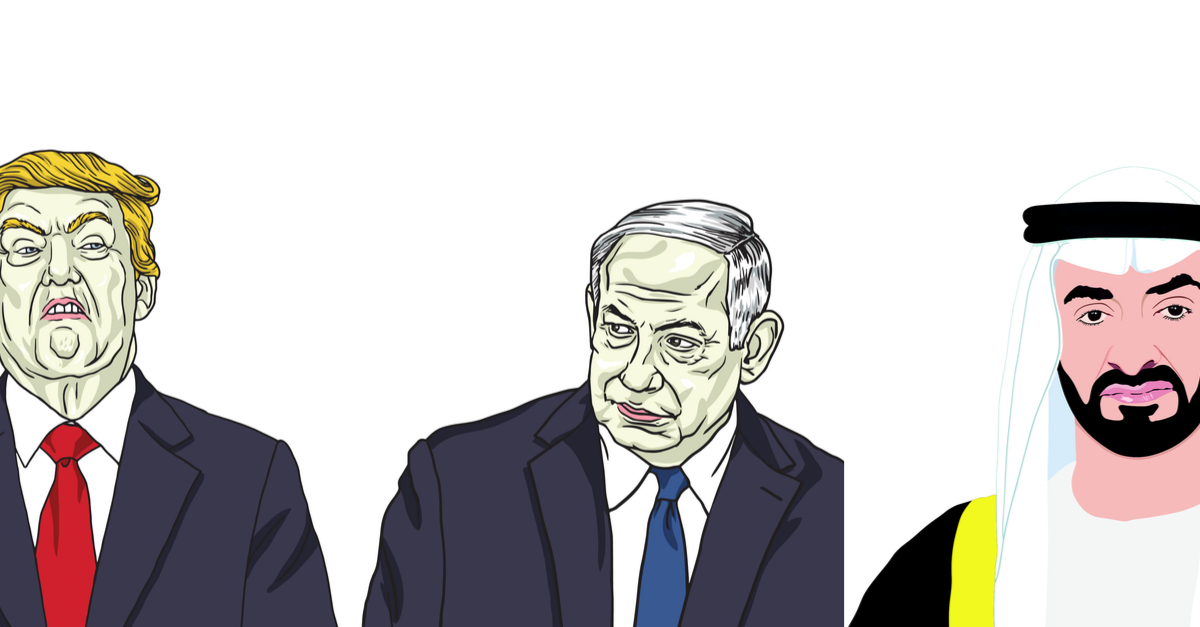 The Israel-UAE Deal Isn’t About Peace at All

The U.S.-brokered pact makes no pretense of peace for Palestinians. Instead, it sharpens a regional coalition against Iran.
By Phyllis Bennis | August 27, 2020

In some ways, the U.S.-brokered plan for mutual recognition between Israel and the United Arab Emirates is big news. For more than a quarter of a century, only two Middle Eastern countries —  Egypt and Jordan — had officially recognized Israel. None of the Gulf monarchies did.

So, it was a pretty big deal when the announcement was made. Except, actually, not so much.

Despite the UAE’s claimed adherence to a decades-long position that no Arab country should normalize relations with Israel until it ended its occupation of Palestinian land, ties between the UAE and Israel had been quietly underway for years. The same is true of many other Arab states.

Quiet but not-quite-covert trade, technology transfers, and security partnerships are an old story. Intelligence ties began in the 1970s, and commercial links took off after the 1994 Oslo accords.  After 9/11, the Bush administration encouraged technology as well as security connections. These expanded continuously, pausing only when Israel assassinated a Hamas leader in the UAE in 2010 and the UAE briefly severed relations.

But by 2011, when Arab popular uprisings across the region were terrifying the autocratic Gulf monarchies, the ties were quickly reestablished. All it took was an Israeli decision to allow a weapons technology sale to the UAE to go through, and a promise they wouldn’t carry out future assassinations in UAE territory.

Over the next decade, Iran emerged as the major enemy du jour for both Israel and the UAE, not to mention several other U.S.-backed Arab monarchies and dictatorships. By the time Trump came into office, his Middle East policy was shaped almost entirely around the creation of a regional anti-Iran coalition with Israel, Saudi Arabia, and the UAE at its core.

No Pretense of Peace for Palestinians

What wasn’t involved in any of this recent trajectory? Palestine.

Almost 30 years ago, Washington orchestrated a supposed Middle East peace conference in Madrid, based on what became known as the “outside/in” strategy. The idea was that under U.S. and — sort of — international auspices, Israel would normalize relations with Arab states while continuing its occupation, settlement expansion, land theft, and discrimination against Palestinians. And once the Arab governments were on board the U.S.-Israeli train, the Palestinians would have no choice but to get on board, too.

That plan failed, of course. And the next iteration, the so-called “inside/out” strategy of creating an Israeli-Palestinian agreement first, which shaped the Oslo accords of the mid-1990s, failed as well. Neither held any potential for actual peace, because neither aimed to provide justice for Palestinians living under Israeli control and facing Israel’s wildly disproportionate power.

So why would anyone think that a return to the earlier failed “outside/in” approach would work any better this time? Because this time around, there was no pretense that Israeli-Palestinian peace — let alone justice — was the goal.

Both Israel and the UAE have wanted normalization for a long time. And now they’ve got it. No serious Israeli opposition exists. Public opposition in the UAE, if it exists, is sufficiently suppressed as to appear non-existent. And Palestinian opposition is irrelevant.

Israel gets its first acknowledged normalization with a Gulf monarchy, and gives up nothing.

Formally, Israel says it will suspend its formal annexation of the West Bank as part of the deal. But its de facto annexation of huge swathes of Palestinian land in the West Bank has been in place for decades, and Prime Minister Benjamin Netanyahu’s government had already put off a declaration of formal annexation because right-wing pressure had shifted from demands for annexation to concerns about the pandemic. And Israel’s United Nations Ambassador Gilad Erdan maintains even now that annexation “isn’t off the table and will be back on the agenda.”

Meanwhile, going public with UAE ties strengthens Israel’s role at the center of the regional anti-Iran coalition. All good for Tel Aviv.

For its part, the UAE gets brownie points with the United States, especially with the Trump administration (and most especially with Trump son-in-law and Middle East adviser Jared Kushner, who has become a BFF of UAE crown prince Mohammed bin Zayed as well as his Saudi counterpart Mohammed bin Salman).

Normalizing public ties with Israel strengthens the Emiratis’ regional position within Washington’s Middle East orbit. And the new connection gives much-needed credibility to the more aggressive regional role the UAE has been playing in recent years in the region, where it’s been punching far above its weight.

With a population of less than 10 million — of which only about 12 percent are UAE citizens —  the breathtakingly wealthy statelet is playing major military roles in war-devastated Yemen and in chaos-riven Libya. The result has been a much more visible role within Washington’s anti-Iran coalition.

The UAE’s Israel embrace also gives the Saudis a bit of a poke in the eye, as it represents a direct repudiation of the 2002 Saudi-launched Arab Peace Initiative. That plan was never implemented, but it was predicated on a clear rejection of normalization with Israel absent an end to Israel’s occupation of the 1967 territories, a just solution for Palestinian refugees, and the creation of a Palestinian state with Jerusalem as its capital.

The U.S. gains strength in the region by getting two key economically and militarily powerful allies to hook up ever more closely against Iran. Trump can claim re-election credit from his extremist pro-Israel base (primarily Christian fundamentalists) for helping Israel gain more Arab recognition.

And of course what better way to follow the Trump family performance disguised as the Republican convention than a high-visibility, high-pomp signing ceremony between two of the president’s favorite allies?

It Could Get Worse

Not a big shift, since Arab governments in general and the UAE monarchy in particular have done little to nothing to actually support Palestinian rights in recent years. The deal does nothing to end the threat of annexation, since de facto annexation is already in place and de jure annexation is just being delayed for a while.

Could it get worse? Absolutely. The UAE move provides political cover for other Arab states to make their covert ties with Israel public — despite on-again/off-again denials, Sudan and Oman are rumored to be moving towards recognition, and possibly Bahrain as well.

Those moves could complicate Palestinian diplomatic efforts at the United Nations or elsewhere.

Even without substance, rhetorical validation from Arab governments has sometimes been useful for Palestinian efforts to show the global breadth of their support. At the non-governmental level, some boycott campaigns against businesses profiting from occupation might face challenges because of Arab governments protecting those companies. But the agreement will not seriously affect BDS, a global grassroots movement led by Palestinian civil society that does not rely on any government support.

Like so many U.S. “peace plans” before it, the Israel-UAE normalization deal will fail to bring peace. De facto annexation of illegally occupied Palestinian land continues, and refugees are still denied their right of return. While those things continue, no new Israel-Arab normalization effort has any chance of bringing peace.

We need to remember, once again, Dr. Martin Luther King Jr.’s warning that “Peace is not just the absence of war, but the presence of justice.”