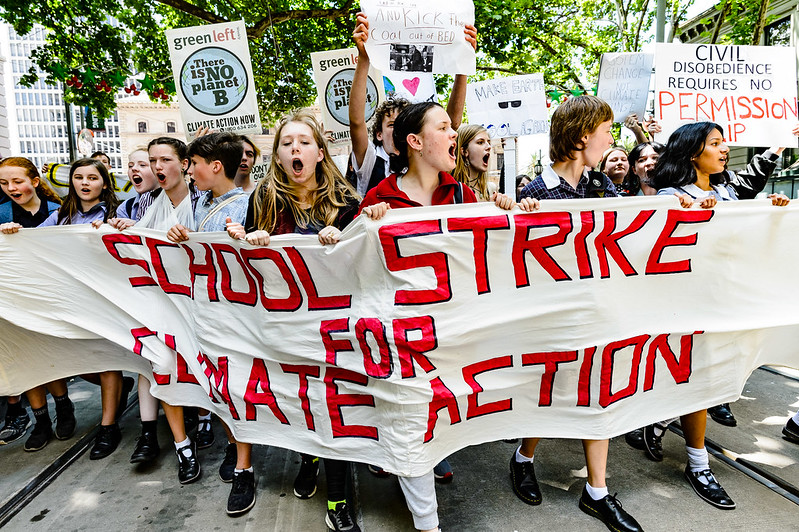 School strike for climate in Melbourne (Julian Meehan via Flickr)

The New Age of Protest

People are hitting the streets to protest government inaction, repression, and corruption. Does that mean democracy is in trouble or stronger than ever?
By John Feffer | October 2, 2019

Led by young people, climate strikers blocked traffic on two mornings at the end of last month in Washington, DC. On the first day, protestors chained themselves to a boat three blocks from the White House, and 32 activists were arrested. On the second day, activists targeted the EPA and Trump International Hotel. It was a not-so-subtle suggestion to commuters stuck in their cars on those mornings to think more favorably about public transportation or telecommuting. It was also a potent reminder, as Congress remains polarized on so many issues, that some paralysis is healthy in the nation’s capital.

The DC protests were part of a global climate strike that involved an estimated 6.6 million people. In New Zealand, 3.5 percent of the population participated. Melbourne, Berlin, and London each had rallies of 100,000 people. In Seattle, over a thousand workers walked out of Amazon headquarters, demanding that the company reduce its carbon emissions to zero.

It wasn’t just the children of the privileged in the industrialized world who were out on the streets. Protests took place in 125 countries and 1,600 cities, including 15 cities in the Philippines, throughout India, and all over Africa.

The global climate strike is just the latest mass protest this year. Demonstrations have roiled Hong Kong since the beginning of the summer. Tens of thousands of people poured into the streets in Moscow through the fall to protest restrictions on local elections. Thousands of Brazilians thronged major cities to condemn their president’s handling of the Amazon fires, and the same outrage prompted people to gather with placards in front of Brazilian embassies all over the world. Protests against Venezuela’s leadership that broke out on January 1 have recently dwindled even as demonstrations to remove Haiti’s president have heated up and security forces have cracked down on Iraqis protesting the corruption and inefficiency of their government.

Anti-government rallies in Serbia became some of the longest running protests in Europe this summer. Elsewhere in Europe, the yellow vests continued to target the government of Emmanuel Macron into 2019. In the UK, thousands gathered to protest Prime Minister Boris Johnson’s suspension of parliament in September.

Protestors marched last month in South Africa to decry rising violence against women. At the beginning of the year, the Women’s March 2019 again focused anger at Donald Trump and his administration’s record on women’s issues, while gun control supporters held “recess rallies” around the United States in August to push for stricter limits on firearms. After massive protests helped oust the previous prime minister in 2016, candlelight protests again returned to South Korea this last weekend as 800,000 people gathered to support an embattled justice minister and his reform agenda.

Analysts almost daily bemoan the erosion in democratic values that has accompanied the rise of autocratic politicians. And indeed, recourse to the streets can be a sign that people no longer believe that the ordinary mechanisms of democracy are working.

Viewed another way, however, the sheer number of protests and their geographic spread prove that 2019 was a banner year for engagement, for participation, for democracy. As protestors like to chant, this is what democracy looks like.

Ahead to the Past?

Fifty years ago, young people also declared that they were mad as hell and not going to take it anymore. In Warsaw in 1968, Polish students demonstrated in defense of free speech and against police brutality. It was part of a larger rebellion in the Soviet bloc, led by Alexander Dubcek’s “socialism with a human face” reforms in Czechoslovakia. Students in Germany contacted their rebellious counterparts on the other side of the Iron Curtain as part of their own campus actions. In Paris, meanwhile, French students took over the streets with slogans like “Be realistic, demand the impossible.”

It was a worldwide phenomenon. Students mobilized in Mexico, Pakistan, and Japan. The first protests against the military dictatorship began in Brazil. And, of course, huge anti-Vietnam War demonstrations convulsed the United States.

Then as now, young people were upset with government repression, grievous policies of war and environmental destruction, and systemic sclerosis. They were critical of an imposed political consensus – by military juntas, communist governments, and the joint efforts of liberal and conservative politicians in the democratic world.

But there was also hope. Young people believed in 1968 that they could create new societies – at the micro-level in communes, in newly radicalized city councils, and even at a national level like Dubcek’s experiment in Czechoslovakia. “Beneath the paving stones – the beach!” French students wrote on the walls of Paris that year.

Alas, many of the protests of 1968 ended in tragedy. The Polish government threw the students in jail. The Soviet Union invaded Czechoslovakia and ended Dubcek’s experiment. The Mexican government killed untold number of students. Richard Nixon was reelected in the United States, and the Vietnam War dragged on for another seven years.

Today, young people are operating under a sky full of ominous clouds. They aren’t filling the streets to create a new world so much as to save the old, imperfect one. If 1968 was a year of utopian protest, 2019 has been one long effort to prevent a dystopian future.

The protests of 2019, so far at least, have not produced much change. In some countries, the pushback has been terrifying.

During a summer of escalating protests, Russian authorities detained 2,000 people, most of them young. The vast majority of the detainees were subsequently released. But several were convicted of various offenses, including inciting a riot, and sentenced to several years in prison. “I can say with certainty that Russia is striving inevitably towards freedom,” 21-year-old protestor Egor Zhukov said at his trial. “I don’t know whether I will be freed, but Russia certainly will be.” He is currently under house arrest and has been put on a government blacklist of terrorists. This week, 25,000 people returned to the streets in Moscow to demand the release of all those arrested over the summer.

As China celebrated its seventieth year of Communist rule, protestors in Hong Kong tried to upstage the proceedings. For the first time, police fired live ammunition at the crowds. One high school student was hit in the shoulder. Of the 51 people who went to the hospital, two are in critical condition. The protests, which have been going on for over 100 days, have not been entirely nonviolent. Protestors have thrown gasoline bombs and beaten police with metal pipes. The policy, too, have been increasingly aggressive. An air of desperation is settling over the scene.

In the United States, a few scattered protests have taken place in support of the impeachment of Donald Trump. The president’s wrath, meanwhile, has been focused closer to home. Trump has lashed out at the person who blew the whistle on his conduct with foreign leaders, which precipitated the Democratic Party’s decision to press ahead with an impeachment inquiry. Trump called the CIA whistleblower “close to a spy” – well, duh, the person does work for the CIA – and a “traitor.” Trump publicly lamented that the United States no longer treats traitors the way it once did (presumably by imposing the death penalty). Given his willingness to put his own interests – and occasionally the interests of other countries – above the national interest, Trump may one day soon be relieved that the United States has changed its policy toward traitors.

Even worse, Trump has retweeted pastor Robert Jeffress’ contention that the United States could descend into a “civil war” if the president is impeached. This is the closest that a president has come to a call to arms within the country since the 1850s. It’s one thing for an autocrat like Vladimir Putin or Xi Jinping to use the apparatus of the state to suppress protests. It’s quite another for a democratically elected leader to threaten to call on his well-armed supporters to rise up against the state itself.

As in 1968, the protestors can’t expect immediate results. It took twenty more years before the student protestors in Poland and Czechoslovakia would oust the governments that suppressed them. Mexico is no longer a one-party state, and Pakistan is more or less a democracy. Despite Jair Bolsonaro’s best efforts, Brazil has not returned to the days of military dictatorship.

Patience, however, is not the best strategy when it comes to climate change. The ice continues to melt. The temperatures continue to rise. Extreme weather events continue to happen. As the old advertising jingle used to go, you can’t fool Mother Nature. The #FridaysforFuture movement isn’t really a bunch of rebellious students. If they had one unified message last month, it was: please, for the sake of the planet, listen to your Mother!