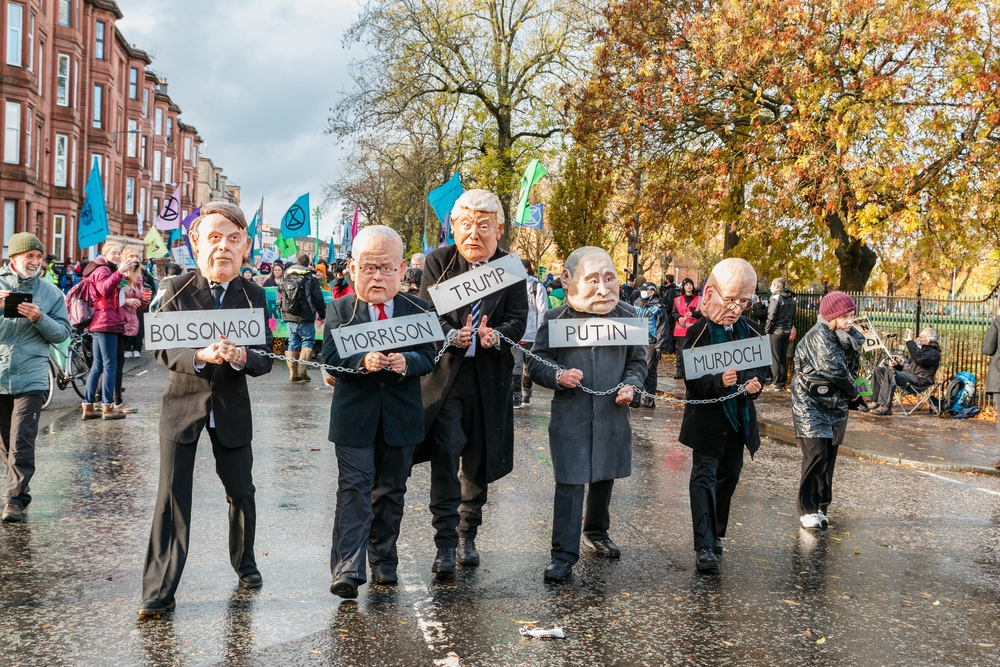 The Rise of Self-Hating Politicians

House Republicans, Euroskeptics, Vladimir Putin, and Jair Bolsonaro are the agents of a new kind of political disorder that parallels the chaos of failing states, economic catastrophe, and climate disasters.
By John Feffer | January 11, 2023

Some politicians just hate politics. They get into the game in order to disrupt it. They have such a visceral hatred of governance that, like suicide bombers, they’ve smuggled themselves into government in order to blow it up from within.

Much of the coverage of the multiple attempts to elect Kevin McCarthy as House speaker treated the uprising of the “radical wing” of the Freedom Caucus as a political tactic. The 20 Republicans who opposed McCarthy on more than a dozen votes extracted a series of important concessions before they relented to voting along party lines. In other words, these politicians were playing the time-honored political game of horse trading.

But there’s another way of looking at how these far-right politicians held Congress hostage to their demands.

Back in 2001, the anti-tax activist Grover Norquist mused that he and his cohort wanted to scale back government until it was small enough “to drown in a bathtub.” The struggle between McCarthy, himself a MAGA toady, and the likes of firebrands Lauren Boebert (R-CO) and Andy Biggs (R-AZ), was no mere political game. Rather, Americans were glued to their newsfeeds in the new year watching a new generation of self-hating politicians in their attempts to drown the U.S. government in a bathtub.

Don’t believe me? First, let’s take a look at the perps.

Twelve of the 20 holdouts rejected the results of the 2020 election and thus participated in the undermining of U.S. democracy. Several, including Scott Perry (R-PA), reportedly sought presidential pardons from Donald Trump for their efforts to overturn the election. Chip Roy (R-TX) has explicitly said that his work is all about “empowering us to stop the machine in this town from doing what it does.” Lauren Boebert wants to dispense with representative government altogether by making it subordinate to churches.

These are not politicians. They are coup followers waiting for the return of their authoritarian Godot.

Next, let’s look at the concessions this band of not-so-merry pranksters extracted from McCarthy. First there’s the “motion to vacate the chair,” which allows any one member of the House to call a vote to recall the speaker. They should rename this rule the “chaos option,” since it offers pretty much anyone the opportunity to bring the chamber to a standstill over a leadership battle.

Another concession requires spending cuts to accompany any decision to raise the debt limit. Raising the debt ceiling to avoid default has become a fraught process in Democratic administrations as Republicans in Congress use the requirement as a way of forcing government shutdowns (for instance in 2013). During Trump’s tenure, Republicans had no qualms about raising the ceiling since their would-be authoritarian leader was in charge of government and transforming it into a incoherent mess. In the next two years, expect the Republicans to demonstrate just how much they hate government by bringing it to the brink of shutdown as often as possible.

In a third concession, McCarthy agreed to a 10-year budget proposal that caps spending at 2022 levels. Peace activists might be cheered by the estimated 10 percent reduction in military spending such a budget cap would entail. But let’s be serious. The Republicans won’t actually cut from the Pentagon side of the budget. They’d simply slice off more from the non-military side with approximately 18 percent reductions in health-care spending, agricultural supports, child nutrition, and the like.

In other words, the Republicans have turned on the faucets and readied their knives to make government small enough to fit in the bathtub. If they win in 2024, their new slogan will ring out: let the drowning begin!

Not Just the United States

Nigel Farage deserves an award for world’s most self-hating politician. Here was a guy who despised the European Union so much that he couldn’t wait to push his country out of it. Farage was a main force behind the Brexit campaign in the UK, which improbably succeeded in 2016 with a narrowly passed referendum.

And what exactly was Farage’s job at the time?

In January 2020, Farage made a final speech in which he declared that:

I am hoping this begins the end of the project. It’s a bad project. It isn’t just undemocratic, it’s anti-democratic and it gives people power without accountability. That is an unacceptable structure… I can promise you, both in UKIP and indeed the Brexit Party, we love Europe – we just hate the European Union.

When he began waving the Union Jack, the speaker of the European Parliament cut him off and told him to leave. That the speaker hadn’t cut off Farage’s mic 11 years earlier proves just how wrong the Euroskeptic was and just how democratic the EU is.

Over the years, Farage had made out like a bandit at the EU’s expense, having taken home $6,000 a month plus a daily allowance of more than $300 for what was, at least to Farage, an anti-job. A couple years ago, the EU fined him for misuse of budget, but frankly he should be forced to forfeit everything he’d ever earned from his political tenure in parliament on the grounds of political malpractice.

Farage is part of a new generation of far-right-wing politicians who don’t believe in politics. They operate in the political world, for democracy is the name of the game in their countries, but they are fundamentally anti-political. Like Donald Trump, they are good at breaking things, but they haven’t a clue about how to forge the political compromises necessary to build things.

Vladimir Putin is a model in this regard. He has systematically deconstructed democracy in Russia, such as it was after Boris Yeltsin stepped down in 1999. He has done whatever he can to sow political chaos in Europe and the United States by supporting Euroskeptics and, in a spectacular series of dirty tricks, Donald Trump. And now, after causing so much damage in Chechnya and Syria, he is busy destroying Ukraine.

Not all far-right actors are anti-political. Viktor Orban, for instance, is an intensely political creature who has cleverly maneuvered his way into power in Hungary and then wielded that power very effectively (though malignly). Georgia Meloni, too, is a crafty politician who has no intention of destroying the institutions she needs to implement her regressive anti-immigrant and “pro-family” policies in Italy.

But all of these imps of the perverse—the MAGlogdytes, Nigel Farage, Vladimir Putin—are the agents of a new kind of political disorder that parallels the chaos of failing states, economic catastrophe, and climate disasters. In practice, they view liberal democracy as a fatally flawed model characterized by stolen elections, deep-state conspiracies, and unacceptable parliamentary compromises. Not surprisingly, these self-hating politicians all gravitate toward the authoritarian end of the spectrum.

They are no doubt watching what is happening in Brazil with bated breath.

All self-hating politicians dream of coups.

For Vladimir Putin, the coup was of the slow-motion variety, with political opponents neutralized over a period of time and consolidation of authority taking place within a democratic shell.

Donald Trump, as Maggie Haberman details in her book Confidence Man, reveled in his newfound authority to use Air Force One, invite whomever he wanted to the White House, and order Diet Cokes with a tap of a button on his desk. But as a man of limited imagination and even more limited managerial capability, Trump couldn’t effectively plan for a seizure of power in the aftermath of his loss in the 2020 election. He could only gesture in that direction and rely on a cohort of equally inept advisors (remember Giuliani at the Four Seasons Total Landscaping press conference?) and a poorly organized mob that did a lot of damage without achieving any of its goals.

But don’t let ineptitude distract from the central purpose of this circus. As Roger Stone, the intermediary between the mob and the mobster-in-chief, put it on January 6, “Fuck the voting, let’s get right to the violence. Shoot to kill.”

Perhaps January 6 will come to seem like merely a pilot episode. In The New York Review of Books, Fintan O’Toole explains:

If it happens again, it will probably not happen like this. The pilot episode was a disaster because it had no coherent script, too many ham actors, too weak a grasp on the difference between gestures and consequences. But there is much to learn from it. Next time, if there is one, the plot will be much tighter, the action less outlandish, the logistics much better prepared, the director more competent.

Consider, then, what happened this week in Brazil, when followers of Jair Bolsonaro enacted their own version of January 6 a couple of days after the second anniversary of the U.S. debacle, as another failed pilot.

In the Brazilian case, the protesters were not trying to interfere in the handover of power from Bolsonaro to Luiz Inácio Lula da Silva. After all, Lula held his inauguration last week. The insurrection organizers were instead hoping for the chaos to trigger the Guarantee of Law and Order, allowing the military to step in to suspend democracy.  Toward that end, and with the tacit approval of many members of the security forces on the scene, rioters cranked up the crazy as they breached government buildings in Brasilia. According to one account, “they seemed beside themselves with hate, like a horde of zombies. They were running down hallways, smashing things, urinating, defecating in the corridors and in the rooms on one destruction spree.”

A hardcore band of protestors had been outside the Brazilian Congress for weeks, not unlike the “Freedom Convoy” of truckers in Ottawa at the beginning of last year. Bolsonaro and allies had been collaborating closely with their friends in the United States. Like Trump, Bolsonaro pressed his claims that the election was fraudulent—and, as in the United States, the courts rejected his claims. Like Trump supporters, Bolsonaro fans claim that “leftist infiltrators” were actually behind the violence in Brasilia. Like Trump, too, Bolsonaro has retreated to Florida, the preferred location of sore losers.

Brazilian authorities arrested more than a thousand people in connection with the storming of the Brazilian congress, presidential palace, and supreme court. More importantly, two top security officials have been ordered arrested for their failure to rein in the anti-Lula protestors. Despite the promise of future pro-Bolsonaro protests, these arrests coupled with huge pro-democracy gatherings throughout the country might be enough to quash efforts by the mob leaders and the self-hating politicians that inspired them to destroy Brazilian democracy.

But don’t make the mistake of underestimating these forces of mayhem. As those 20 recalcitrant Republicans once again discovered last week, it’s relatively easy to throw a spanner in the works. They turned the relatively straightforward election of the House speaker into a travesty. For the next two years, they’ll do whatever they can to stop the U.S. government from working, thus undermining what little remains of public trust in these institutions.

Then, if the 2024 election goes their way, they’ll borrow a page from Putin’s book and turn their attention to the larger task of drowning not just government but democracy writ large.