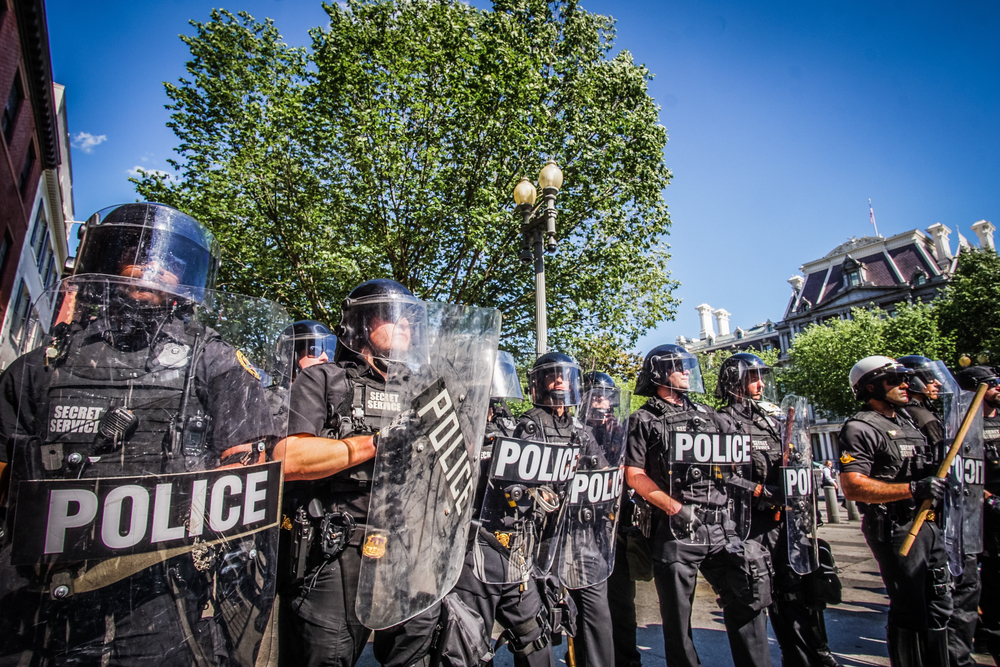 The American war machine has always been integral to American racism. It's time to tear it down along with those Confederate statues.
By Harry Blain | June 10, 2020

It was entirely fitting that Senator Tom Cotton would be the one to say the quiet part out loud —  very loud — in the New York Times.

Usually, Cotton specializes in inciting war against black and brown people in other parts of the world. He does so with such impressive regularity and predictability that it has ceased to constitute news.

And Cotton is not alone. Before his dubiously earned reputation as a “Never Trumper,” John McCain was another reliable advocate of unrestrained violence against foreigners. Elected Democrats tend to choose their words somewhat more carefully, though they, too, occasionally say what they really think — like when Chuck Schumer explained that Gaza remains a prison because the Palestinians “don’t believe the Torah.”

While Cotton’s op-ed — if we can call it that — ignited a mutiny among Times writers, the standard diet of militarism aimed at distant lands is generally digested without serious protest.

The differences, of course, are real. It is jarring and appalling to hear the nation’s most powerful political leaders candidly contemplate war against their own citizens. If this doesn’t “cross the line” for the president’s most devout followers, I shudder to consider where the line is.

Nevertheless, there is also something unsettling about the implicit notion that state-sanctioned terror is acceptable as long as we don’t have to see it. The truth is: black America has always seen it, and war has always made it worse.

“There are no more law-abiding people in the country than our negro citizens,” Congressman Byrnes of South Carolina reassured the House Judiciary Committee in December 1919. However, “the earnest effort of these radicals now is to induce them to join this movement, playing upon the real and imaginary grievances of the negro.”

“Reds Try to Stir Negroes to Revolt,” a New York Times headline proclaimed on July 28, 1919. “Evidence is accumulating in the files of the Government to show that the negroes of this country are the object of a vicious and apparently well financed propaganda which is directed against the white people, and which seeks, by newspapers, pamphlets, and in other ways, to stir up discontent among the negroes, particularly the uneducated class in the Southern States.”

Here was a familiar dynamic. America went to war, black America did much of the fighting, and then had the gall to fight for some dignity at home.

The cause was not as compelling as war-to-the-death against chattel slavery. “For bleeding France and what she means and has meant and will mean to us and humanity and against the threat of German race arrogance, we fought gladly and to the last drop of blood,” W.E.B. du Bois wrote in Returning Soldiers. “For America and her highest ideals, we fought in far-off hope; for the dominant southern oligarchy entrenched in Washington, we fought in bitter resignation. For the America that represents and gloats in lynching, disfranchisement, caste, brutality, and devilish insult — for this, in the hateful upturning and mixing of things, we were forced by vindictive fate to fight also.”

“Under similar circumstances, we would fight again,” du Bois added. “But by the God of Heaven, we are cowards and jackasses if now that that war is over, we do not marshal every ounce of our brain and brawn to fight a sterner, longer, more unbending battle against the forces of hell in our own land.”

This was the kind of talk that no self-respecting white supremacist could possibly tolerate.

The immediate perpetrators of the “Red Summer” were the lynchers, the arsons, and the vandals. They were aided, in various ways, by local police forces.

But away from the blood-stained streets — supremely comfortable in the D.C. office spaces where he would spend his whole life — was the Justice Department’s 26-year-old star pupil, John Edgar Hoover. Amid the apparent chaos and confusion of the Red Summer, Hoover began to forge a durable model of repression.

He didn’t touch a rope or torch a church. He didn’t beat a black body or smash up a black business. He was a data guy, dedicated — diligently and consistently — to the destruction of black political power through surveillance, infiltration, and blackmail.

In 1919, the primary targets were Marcus Garvey, as well as the National Association for the Advancement of Colored People (NAACP). The methods were primitive, including a less-than-subtle campaign to have Garvey convicted of mail fraud. Over time, they matured to encompass the wiretap, the agent provocateur, bugging, forgery, targeted harassment — all of which were infamously deployed against the civil rights movement in the 1950s and 1960s, and later against the Black Panther Party.

In his half-century career, Hoover repeatedly learned that war was the perfect justification for more money, more men, and fewer constraints on his power. Conflict abroad, he argued, must mean subversion at home — the Germans one day, the Communists the next. The latent Fifth Column, uniquely susceptible to intruding schemers, would always be black Americans.

After the Second World War, Hoover’s Federal Bureau of Investigation (FBI) would no longer have a monopoly on the spying bureaucracy. A Central Intelligence Agency (CIA) and National Security Agency (NSA) were created — in the official narrative — to provide global intelligence to a now-dominant global power.

Inevitably, even though these agencies were expressly excluded from domestic operations, they joined the party. As John Prados writes in his history of the Vietnam War, “every element of the U.S. intelligence apparatus, not to mention local police, operated against Americans” — from the CIA’s “Project Chaos” surveillance to the Defense Intelligence Agency’s infiltration of the antiwar movement.

The Perfection of the Police State

Still, during the Vietnam era, black uprisings across the United States — especially in 1965 and 1967 — received the undiluted, pitiless force of “law and order.” They were also met with what would become a nationwide innovation: the SWAT team.

The LAPD’s Daryl Gates diplomatically changed the acronym from “Special Weapons Attack Team” to “Special Weapons And Tactics,” but the original name was ultimately more accurate. As Radley Balko has painstakingly documented, the SWAT team, which is now a ubiquitous feature of American policing, is all about offense — relentless pursuit of the enemy wherever he lives and hides.

The enemy, however, is not just a foreign or exotic foe. It is Drugs, Crime, or Terror — vague and endless threats that are invariably assigned black and brown faces.

This domestic war has been waged with machine guns, armored vehicles, no-knock warrants, and almost every conceivable shiny tool of repression. All while the non-police state – schools, hospitals, subways, roads – has crumbled.

As white Americans begin to question the broken and predatory society that our wars have created, black Americans wonder if we mean it this time. Martin Luther King was surely stating the obvious when he described racism, militarism, and poverty as this country’s three constantly connected evils. Yet each evil still thrives.

White America is likely more comfortable with Instagram blackouts than it is with an assault on the American war machine. But that machine is and always has been integral to American racism. Along with Robert E. Lee, King Leopold, and Edward Colston, it must be torn down.