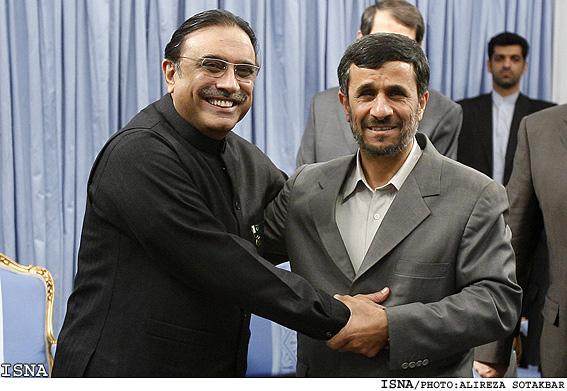 The Courtship of Iran and Pakistan 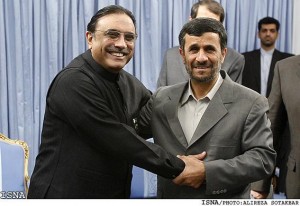 Pakistani President Asif Ali Zardari paid a second visit to Tehran last weekend after having been there only three weeks ago. Official reports by Pakistani and Iranian sources broadly characterized the visit as “part of the ongoing process to strengthen bilateral ties, step up consultations with countries in the region for peace and stability at a time when tension was developing in some parts and for promoting peace and stability in Afghanistan and fighting militancy.” But this rationale hardly warrants two head-of-state level official visits in such a short span of time. After all, lower-level officials could have dealt with such concerns, as in the past.

On the other hand, contrary to some far-fetched speculation, Pakistan is not likely to be playing a mediating role between Iran and the West (when Pakistan’s relationship with the United States is so vexed) or acting as a mediator between Saudi Arabia and Iran (when the two countries are now on better speaking terms).

In light of recent developments in Pakistan’s foreign policy, Zardari made two visits in three weeks to Tehran because of the unfolding political crisis between Pakistan and the United States provoked by the U.S. raid on Osama bin Laden’s hideout near Islamabad in early May. Pakistan strongly condemned the raid as a blatant violation of its national sovereignty. It restricted the U.S. military’s access of its soil for conducting drone strikes on suspected militants and reducing the number of U.S. military advisors in Pakistan. The United States retaliated by freezing $800 million worth of military aid to Islamabad.

Even in the absence of a crisis in U.S-Pakistan relations, Iran and Pakistan have abundant rationales for establishing a dependable framework for closer bilateral relations. Apart from the cultural and religious bonds between the two nations, economic and security considerations drive relations between the two countries.

In general, though, Iran and Pakistan have not been able to forge a strategic partnership with each other because of the conflicts of interest between the two countries in certain policy areas in the past. Their divergent foreign policies toward Afghanistan have long been a major source of tensions. These tensions were at their peak in the second half of the 1990s when the Taliban captured much of Afghanistan. Pakistan lent its full support to the Taliban while Iran backed the anti-Taliban Northern Alliance, a coalition of Persian-speaking and other non-Pashtun ethnic groups in Afghanistan. The U.S. invasion of Afghanistan and the overthrow of the Taliban regime put an end to the proxy wars between different regional powers in Afghanistan and subsequently removed a source of tensions in the relations between Iran and Pakistan, at least on a temporary basis.

Both Pakistan and Iran have also needed to balance their mutual relations against their interests in cultivating friendly relations with the respective regional rivals. Iran has attached importance to its relations with India and has not wished its relations with Pakistan to come at the cost of alienating India. Similarly, Pakistan maintains important economic interests with Iran’s regional rival Saudi Arabia, and more importantly Iran’s arch foe the United States. These considerations have precluded the emergence of a full-fledged strategic partnership between Iran and Pakistan even after Afghanistan has ceased to be a major source of tensions.

Under normal conditions, the United States does not have much to worry about any warming in Iran-Pakistan relations. But the combination of cooler U.S-Pakistan and warmer Iran-Pakistan relations can have significant implications for U.S. interests in the region. Given its present military presence in Afghanistan and its continued fight against the Taliban and the remnants of al-Qaeda, the United States simply cannot afford to simultaneously antagonize Pakistan and Iran. It will either need to engage Iran over Afghanistan and play down other contentious issues, or buy Pakistan’s friendship and alliance back.

Given the current level of U.S. hostility and confrontation with Iran, Iran will surely welcome any opportunities to cultivate a coordinated Afghan strategy with Pakistan, should it be sincerely interested in a strategic partnership. Although Iran has welcomed the overthrow of the Taliban regime and has lent its support to the central government in Afghanistan, it would better serve Iran’s security interests if the United States withdraws from Afghanistan and removes its military bases from across the Iranian border in that country. A close partnership with Pakistan, against the background of cooler U.S.-Pakistan relations, will significantly facilitate the realization of that objective for Iran.

Iran and Pakistan have various resources at their disposal to turn up the heat on the United States in Afghanistan and make its military presence in that country too costly. Actively supporting the Afghan insurgency against U.S. forces, denying transit routes for the delivery of logistical supplies to NATO forces, and using their respective leverage with the Afghan government and traditional influence in Afghan society to incite public opposition to the U.S. military presence in that country are only some of the tools available to both countries in the event of escalating tensions with the United States.

Nevertheless, the United States and Pakistan will not likely allow a further deterioration in bilateral relations and will probably attempt to patch up their differences. It thus seems more plausible to attach symbolic significance to the recent warming in the relationship between Pakistan and Iran. Pakistan is genuinely interested in cultivating closer relations for various reasons, including energy cooperation with Iran, but it seems unlikely that it will seek this relationship at the expense of its relations with the United States.

Given the current confrontational U.S. approach toward Iran and its tendency to frame everything Iran-related in zero-sum terms, Pakistani leaders may have intended to raise the alarm for the United States by giving the impression of seeking closer partnership with Iran. Pakistani leaders may have wished to exert pressure on the U.S. government by signaling that any further alienation would lead to closer Iran-Pakistan relations. This development shows once again how far the U.S confrontational approach toward Iran has created unnecessary costs for its foreign policy and has limited its room for maneuver in the region.