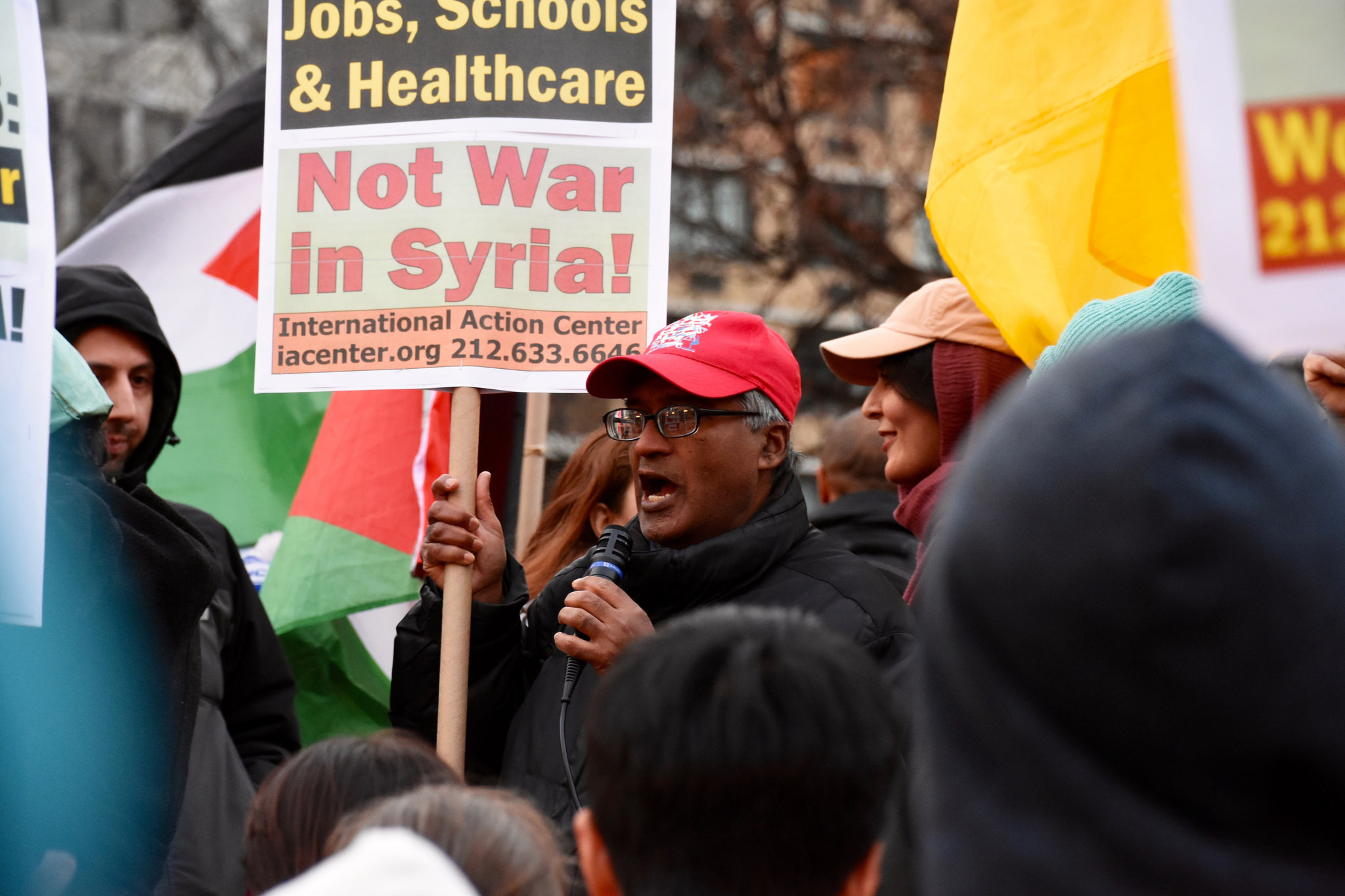 There’s No Strategy Behind Trump’s Wars — Only Brute Force

Trump's wars are now all over the map. The peace movement can fight back by joining already thriving intersectional campaigns.
By Phyllis Bennis | April 18, 2017

These are awesome days for headline writers. So many global settings, such an abundance of weapons, such a wealth of choices!

On the morning of April 14, the New York Times led with “A Giant U.S. Bomb Strikes ISIS Caves in Afghanistan,” matched by CNN’s “US Drops ‘Mother of All Bombs.'” The Washington Post chose Syria, where “Errant U.S. Strike Kills 18: Victims in Syria Were Allied Forces.” By mid-afternoon that same day, the Associated Press had shifted to the horn of Africa, where the “U.S. Sends Dozens of Troops to Somalia, 1st Time in Decades.”

And as the Friday rush hour began in Washington, Fox News opted to head to the north Pacific, leading with an aircraft carrier: “The ‘Powerful’ USS Carl Vinson Steams Towards North Korea.”

A few days earlier the most popular choices were various versions of CNN’s “U.S. Launches Military Strike Against Syria.” (That headline described something new only because the strike officially targeted a Syrian government military site, while ignoring the not-so-new reality that the U.S. has been attacking alleged ISIS targets in Syria with drones, bombing raids, and special forces for almost three years.)

A couple of weeks before that, coverage of the Trump wars focused on a devastating U.S. airstrike on Mosul, which a Los Angeles Times headline described as “One of the Deadliest Attacks on Civilians in Recent Memory.” And just before that, the Bureau of Investigative Journalism highlighted “Nine Young Children Killed: The Full Details of Botched U.S. Raid in Yemen.” (No headlines, however, told the full story of the U.S. role in Yemen. That one might’ve read “U.S.-Backed Saudi Bombing Has Killed Thousands, Worsened Famine Facing Millions in Yemen.”)

Around the globe, as these headlines testify, Donald Trump has been cavalierly deploying troops and weapons, claiming such military actions are designed to send political messages.

He’s threatened a preemptive strike against North Korea, considered a major escalation in Yemen, and turned loose his military commanders to bomb wherever, however, and with whatever they choose, weakening even further the already insufficient restrictions Obama had put in place to try to minimize civilian casualties. Deaths of civilians under both U.S. drones and conventional airstrikes have escalated.

For those who thought that military restraint was part of Trumpian isolationism, think again.

Not one of these actions was necessary. Not one will make people in this country — let alone the Afghans, Iraqis, Syrians, Yemenis, Somalis, or others — any safer. Neither was any of these actions sanctioned by Congress: All violated the War Powers Act, and indeed the Constitution itself, which puts the power to declare war in the hands of the people’s representatives.

Furthermore, not one of them fulfilled the minimal United Nations Charter requirements for the legal use of military force — either Security Council authorization or immediate self-defense. Thus they all violated international law.

And even beyond the illegality, not one could claim a strategic, legitimate, or moral justification.

Of course, the U.S. has been at war in various combinations of Afghanistan and Iraq, Libya and Syria, Yemen, Somalia, and beyond since George W. Bush declared the global war on terror just after the 9/11 attacks of 2001. In some of these countries, the U.S. was at war even before that. But Trump’s actions represent major escalations in every one of those devastated nations. According to the British human rights monitor AirWars, well over 1,000 civilians may have been killed by U.S.-led forces just in Iraq and Syria in March alone, the highest monthly total they’ve ever tracked.

What we see in these attacks is not a strategy, but a new way of communicating raw power.

How does it work? Instead of sending diplomats to help get all warring parties involved in negotiations, you drop the largest non-nuclear bomb ever used in combat on one of the world’s poorest countries. Instead of supporting UN efforts to create incremental ceasefires, you send special forces. Instead of investing money, time, and high-level attention to help shift regional conflicts from the battlefield to the negotiating table, you send armed drones to drop more bombs.

And, of course, instead of increasing funding for diplomacy, you strip 29 percent of the State Department budget, and nearly zero out humanitarian aid, and hand it all over to the Pentagon as part of a $54 billion increase in military spending.

None of this is in service of any actual policy, just a unifying theme: War trumps diplomacy. Bullies rule. It’s a shock-and-awe attack — many shock-and-awe attacks, actually — to drive home a message aimed not only at troops on the ground or militants holed up in a cave, but also at the populations as a whole, across Afghanistan, Syria, Somalia, Iraq, Yemen, and beyond. The goal seems to be ensuring that no question remains as to where and with whom the ultimate power resides.

It’s also a message to a domestic audience here in the United States, designed to shock if not surprise: The bully in the White House is calling the shots.

The question now isn’t what Trump — or the generals and billionaires filling his cabinet — will do next. It’s what will we do next, as opponents of these wars?

In short, we need to integrate opposition to these wars into the very core of the movements already rising so powerfully against racism, for women’s and LGBTQ rights, for climate and economic justice, for Native rights, for immigrant rights and refugee protections, for Palestinian rights, and much more.

We know that some approaches from earlier efforts are needed once again. Building ties with and privileging the voices of people facing the consequences of U.S. actions, dying under the bombs or reeling under brutal sanctions, remain crucial. Lifting up anti-war veterans provides entre to important new audiences. Reminding people of how U.S. wars are too often fought for resources — as well as for the expansion of power, for military bases, for regional and global domination, and how racism informs all of Washington’s wars — are all key to popular education.

What we do know is that everyone — from Syrians, Iraqis, Afghans, Somalis, and Yemenis to those of us in this country — needs diplomacy to win out over war. We’ve faced wars for decades now, but we’ve also had some victories where negotiations triumphed over force — in Cuba, in Paris at the climate talks, and most especially in the Iran nuclear deal.

We know what diplomacy looks like, and we know how to fight for it.

We’ll need new strategies, new tactics — but we continue to stand on the shoulders of those who have gone before us. Our country is waging war against peoples across the globe, indeed waging war against the earth itself. But we are still here, challenging those wars alongside those who guard the earth, who protect the water, who defend the rights of those most at risk.

The great historian Howard Zinn reminds us of it all: Our country’s history began in the genocide of indigenous nations and the enslavement of Africans brought here in chains. But from that beginning it also became a country of people’s movements against genocide and slavery, against racism and misogyny and Islamophobia, of movements for justice, for internationalism, and yes, for peace.