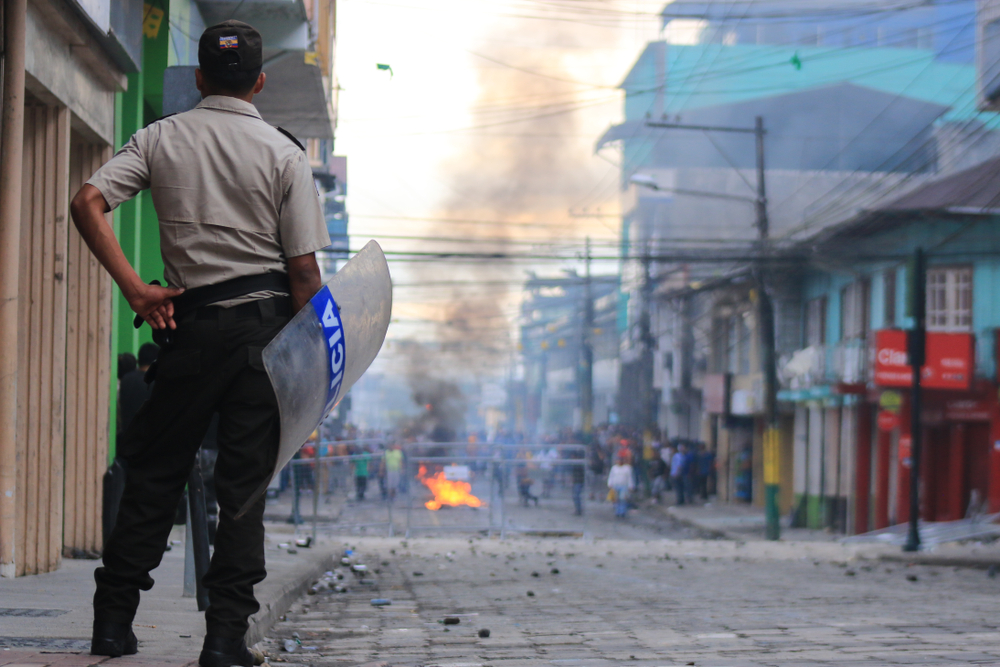 Throughout South America, Structural Violence Is Showing Up as Street Violence

Ecuador was only the latest indicator of what’s possible when indigenous movements exercise their power. It also showed what’s at stake.
By Dana Hill | December 20, 2019

In recent months, conflicts all across South America — from Ecuador to Bolivia, Chile, and Colombia — have revealed extreme human rights violations by governments allied with international organisms such as the IMF and dependent on extractive industries. Often, the target has been the continent’s large indigenous population.

While Bolivian protests revolved around the coup ousting indigenous president Evo Morales, they began in Ecuador, Chile, and Colombia in response to those governments adopting neoliberal economic policies. In each of these cases, indigenous-backed movements have won important victories.

In Chile, demonstrators won an agreement to replace the Pinochet-era constitution. In Bolivia, a new law has paved the way for new elections. Meanwhile, impressive strikes continue in Colombia.

Before any of these, however, was a major victory in majority-indigenous Ecuador, where demonstrators forced the government to backtrack on its cancellation of fuel subsidies for impoverished residents. There we saw one of the clearest patterns of the interests of extractive industries aligning with neoliberal financial institutions — and then being brutally enforced by racist military and police officers.

Ecuador was only the latest indicator of what’s possible when indigenous movements exercise their power. But, as it is elsewhere on the continent, it’s also a case of the structural violence that plagues much of the continent surfacing in alarming, immediate street violence.

This past March, the Ecuadorian government signed a letter of intent with the International Monetary Fund (IMF) for a $4.2 billion loan with strict “structural adjustment” requirements — that is, requirements for cuts in public services and expenditures.

Human rights organizations noted that in Ecuadorian law, this type of agreement must be ratified by the National Assembly. This loan, however, was not. “The nature of the conditions” in the agreement, they worried, “constitute a threat of direct violation of labor rights as well as indirect threat to the rights to health, education, a healthy environment and balanced ecosystems, to cultural identity, and access to public services as a result of budget cuts.”

A coalition took legal action, asking judicial authorities to take precautionary measures “to stop the threat of violating the aforementioned rights,” demanding the agreement with the IMF be made transparent — and the president prohibited from signing it — until a court ruling decides if the National Assembly must approve it. They received no answer.

On October 1st, Ecuadorian president Lenin Moreno announced Executive Decree 883, a   package of economic measures including the elimination of fuel subsidies. He also announced that he would be sending other structural adjustment reforms — effectively reducing labor rights and benefiting multinational companies — to the National Assembly for approval.

In response, Moreno issued Executive Decree 884, declaring a national “state of exception” — suspending the right to association and assembly, and limiting freedom of movement.

What followed, human rights groups said, were systemic violations of “rights to life, human dignity, freedom, and integrity” by law enforcement agencies enforcing “mass repression.” They used tactics such as filling ambulances with supplies used to repress protesters. At least 26 members of the press were attacked, while mainstream communication outlets were obligated (under Executive Decree 888) to “transmit official messages.”

Despite the repression, national indigenous organizations announced their support for the strike and called for their members to converge in Quito on October 9th. In a press release the Confederation of Indigenous Nationalities of Ecuador (CONAIE) stated: “This [paro, or strike] won’t stop until the IMF gets out of Ecuador.”

They added, “This struggle is not about today, or only about the price of gasoline. It is to prevent them from mortgaging our future so that we pay with hunger and poverty for two or three generations that which we don’t stop today.” Thousands of indigenous people from around the country poured into Quito beginning on October 8th, the day President Moreno moved the government from Quito to Guayaquil.

Men, women, children, and elders arrived to set up camp in the cultural center (Casa de la Cultura) and several universities (denominated “humanitarian peace zones”), and were supported by donations of food, clothing, and medical supplies, which poured in from Quito and around the country. Despite this, law enforcement attacked these spaces from the day indigenous people arrived until the paro ended, intimidating people, firing tear gas into buildings, attacking injured people and health workers.

The situation came to a head on October 12th, when law enforcement attacked a peaceful women’s march. Elsewhere, someone set fire to the State Auditor’s Office, and Moreno imposed yet another curfew.

Following his announcement, videos surfaced on social media of military trucks and tanks filling the streets while police surrounded the cultural center and fired tear gas directly into the building. Warnings followed that the military would massacre the 20,000 indigenous people housed there as they slept that night. You could hear the panic in the voices of those filming events.

In a different part of the “humanitarian zone,” medical students faced off with the military, holding hands to form a circle around their university, where thousands more indigenous protestors were housed. People tried to distinguish truth from rumor, rubber bullets from real ones.

The following day, in a meeting mediated by representatives from the United Nations and the Ecuadorian Episcopal Conference, indigenous and government leaders met and negotiated the repeal of Decree 883, and started an ongoing collaboration to create new economic policy.

CONAIE subsequently created the “People’s Parliament” where more than 180 social organizations participated to develop and write the “Alternative Proposal to the Economic and Social Model,” presented to the Ecuadorian government on October 31st. The government announced they will not consider the proposal.

State repression during the paro had racist, classist, and xenophobic characteristics.

The excessive use of force was especially directed at indigenous protestors, the majority of people killed during the paro were indigenous and/or peasants, and seven indigenous leaders are currently facing charges, effectively criminalizing protest. Oswaldo Jarrin, the Defense Minister, made public statements denying the existence of constitutionally recognized indigenous territories. The state also maintained a xenophobic discourse blaming outsiders for the paro and justifying irregular detentions of migrants.

A report by the Public Defender documents that 1,340 people with injuries were treated by the Red Cross and government health workers. At least 11 people were killed in the protests, many by excessive use of force by law enforcement, and at least 8 people lost eyes due to the misuse of “nonlethal” weapons.

Between October 3rd and 13th 1,192 people were detained — 96 percent of them men and 50 percent between 15 and 24 years old, revealing a criminalization of young men. Three-quarters of those detained were determined innocent and released immediately. There were also reports of disappearances throughout the paro, immigrants mistreated in custody, and indigenous leaders tortured by law enforcement.

The Paro as Part of Ongoing Violence 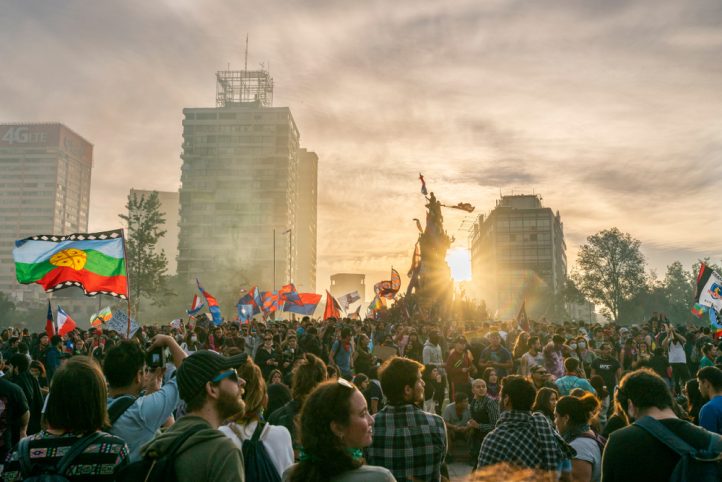 In a sense, the violence seen in the Ecuadorian paro and the other South American protests has made visible the violence that’s been happening beneath the surface for years. The global socioeconomic structure pits companies, institutions like the IMF, and governments seeking to maximize profit without regard for human or natural rights against indigenous groups and activists.

Because indigenous and peasant people live in rural areas and have a close relationship to the land for their livelihoods and way of life, they are often the ones defending it. Global Witness’s annual reports on the violence waged against environmental defenders document this. The UNDP reports that “Women, especially indigenous women, are particularly vulnerable to environmental-related violence — roughly half of all female activists were murdered for defending community land and environmental rights.”

Ecuadorian environmental activists talk about a “feminogenocidio” (feminine genocide) as they discuss how Ecuadorian women are risking their lives to defend the environment. They are attempting to attract international attention to the danger of genocidal extinction for the last 300 Sapara indigenous people, the uncontacted Tagaeri, and the Taromenane tribes, especially with the government’s recent oil concessions in their territory.

In Colombia, meanwhile, where strikes are still underway, the Institute for Development and Peace Studies reports that between 2006 and 2018, 1,786 social leaders, human rights defenders, and ex-FARC combatants and their family members were killed. From 2016 through May 2019, there were 499 cases of homicide directed at indigenous and Afro-Colombian peoples, environmentalists, peasant organization, and community members. Seventy-one percent of those were related to agrarian conflicts over land, territory, or natural resources.

Ecuadorians showed what’s possible when movements confront these injustices. But there and throughout the continent, we’re still getting alarming glimpses of what’s at stake.

Dana Hill is a feminist activist scholar living in Quito, Ecuador, where she has taught and collaborated with women’s and indigenous organizations for the past 10 years.