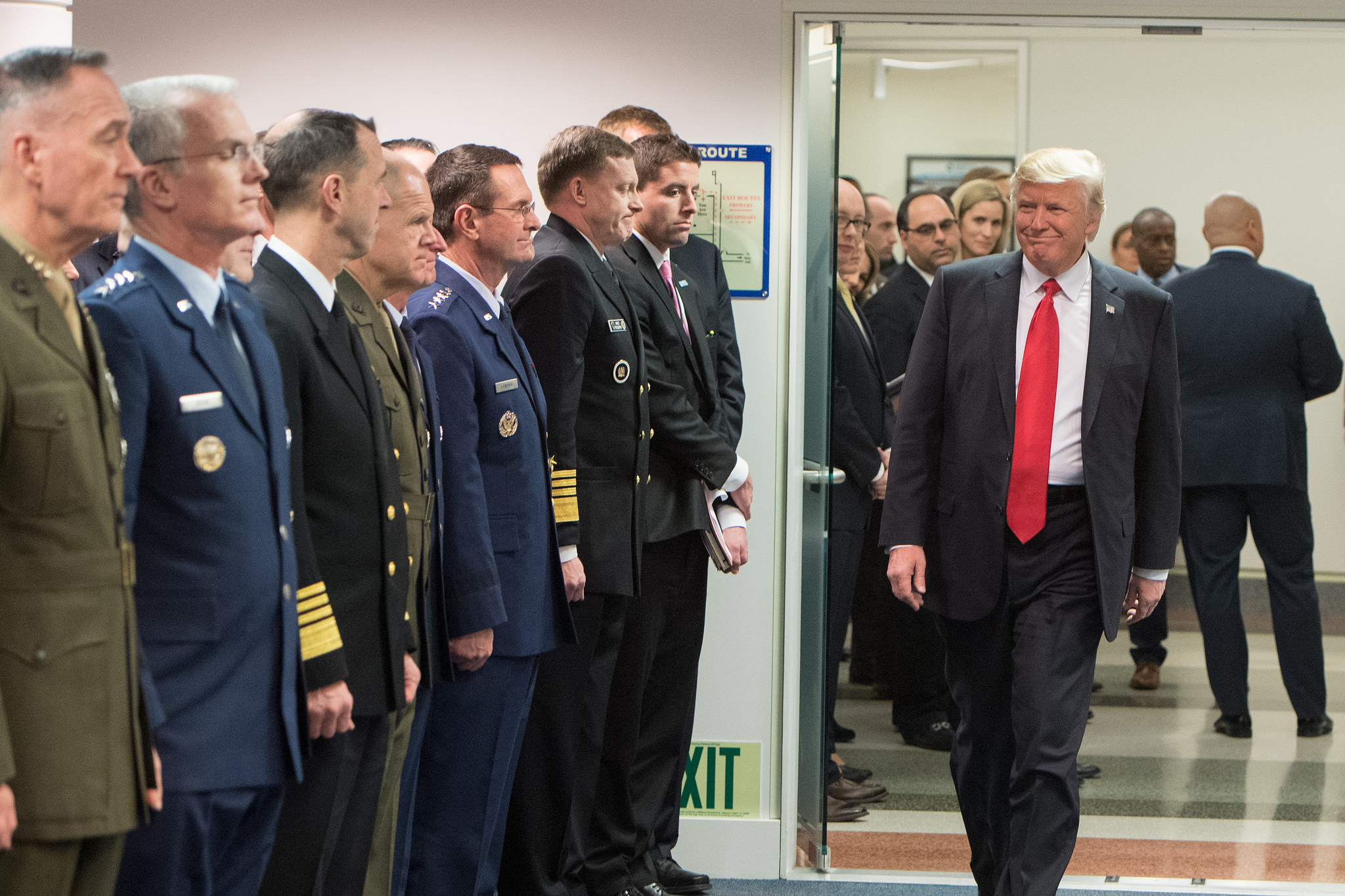 Trump and the Troops

The alternative to Trump is not the glorification of military service. It's promoting the kind of service that gets fewer people killed.
By John Feffer | September 9, 2020

My father enlisted in the Army to fight in World War II. He was 19 or 20 years old, and he wanted to defeat the Nazis. He was one of a million other young Americans to sign up that year.

But my father was also a fun-loving guy who played clarinet in a jazz band and liked to party. Instead of reporting for duty, he went AWOL on a bender. When he showed up late at the military base, he was assigned to the kitchen patrol to peel potatoes. As a result, he stayed behind when his unit shipped out.

According to my father’s version of events, that entire unit perished somewhere in the Pacific.

From then on, my father did everything he could to avoid getting sent overseas. He was part of a group of radio men who continually failed their final test. Spending the entire war stateside in a succession of Army bases, he developed a distinctly anti-war perspective. Together with my mother, whom he met at an Army dance, he passed that philosophy onto his children.

I shudder to think that I have any overlap with Donald Trump. But we both inherited our discomfort with the military from our fathers. Fred Trump preferred to focus on the business of making money. My father had his close brush with war, and it changed his life.

Many other members of the “greatest generation” had a similar change of heart as my father. Like every preceding generation, they experienced the horrors of combat and suffered trauma for much of their post-war lives. Some learned that the other side, too, used the language of “sacrifice” to push young men into battle and persuade families on the home front to accept economic austerity.

Some even came to agree with Smedley Butler, the retired Marine Corps major general who wrote, in 1935, that “war is a racket. It always has been. It is possibly the oldest, easily the most profitable, surely the most vicious.”

Donald Trump knows a racket when he sees one. Growing up wealthy and white, Trump saw no reason to sacrifice limb or life to serve his country. The military was a lousy career for a would-be billionaire who had his own scams to foist on the American public. As my father discovered, the military was often a career-ender, particularly during wartime.

Lots of other men of Trump’s generation avoided the military. Joe Biden received five deferments, and so did Dick Cheney. Bernie Sanders applied for conscientious objector status and then aged out of the draft. Paul Wolfowitz, Elliott Abrams, John Bolton: they all somehow skipped the Vietnam War.

Unlike these men, however, Trump said aloud what most of them must have been thinking, that the United States was involved in a “stupid war” in Vietnam. Trump has gone much further by disparaging military service his entire life.

Trump’s anti-military remarks reported in the recent Atlantic article by Jeffrey Goldberg — “Trump Calls Americans Who Died in War ‘Losers’” — are no surprise. Because they are blunter than even what the president blurts in public, the alleged remarks are causing a larger-than-usual frisson of schadenfreude among anti-Trumpers, and I confess to my own delight at the frenzy of denials coming from the White House.

Perhaps the Atlantic article will subtract just enough supporters from Trump’s side to ensure his defeat in November. Military support for the president was already slipping before the publication of the article — Trump had a 20 percent lead over Hillary Clinton in active-duty support in 2016 but Joe Biden now has the edge by 4 percent in this critical demographic. The military remains the most trusted institution in American society. It’s political suicide to diss the troops.

Trump’s comments are not going to change the way Americans think about war. He has neither the war record nor the gravitas of a Smedley Butler. But with the coronavirus pandemic racking up more casualties on the home front than the United States suffered in combat in World War I, the Korean War, the Vietnam War, and the wars in Afghanistan and Iraq combined, America is perhaps at a watershed moment when it comes to the meaning of sacrifice.

Americans are tired of war. That was one element of Trump’s support in 2016. He criticized America’s “endless wars,” promised to bring U.S. soldiers home, and decried the corruption of the military-industrial complex.

Aside from some token reduction of troops from Afghanistan and Syria and the closure of a U.S. base in Germany, Trump has not honored his promises. He has pumped money into the military-industrial complex and brought its top people into his administration, like Defense Secretary Mark Esper, a former Raytheon lobbyist. Nor has Trump fundamentally altered U.S. military footprint in the world.

True, Congress and the Pentagon have blocked some of Trump’s plans. But the real problem has been Trump’s own ambivalence.

The man might not like soldiers or the military more generally. But he likes power and force. He likes to give orders to all the generals he has appointed as advisors. Above all, Trump likes to break things. If your intention is to smash a china shop, the Pentagon is just the bull you need.

Remember, this is the guy who promised to “bomb the shit” out of the Islamic State. He fulfilled that promise, killing a large number of citizens in the process.

Trump also refused to stop helping Saudi Arabia do the same to Yemen. Last year, he vetoed a bipartisan congressional effort to withdraw U.S. assistance to a war that has pulverized one of the poorest countries in the world. In his statement, Trump said, “This resolution is an unnecessary, dangerous attempt to weaken my constitutional authorities, endangering the lives of American citizens and brave service members, both today and in the future.”

It’s difficult to imagine that an effort to end a war would endanger the lives of “brave service members.” But read another way — that weakening Trump’s power endangers American citizens and soldiers — the sentence perfectly encapsulates the president’s me-first mentality.

Trump might have an aversion to putting U.S. boots on foreign soil, but he sure loves waging war from the air. In his first two years, Trump ordered 238 drone strikes — compared to the 186 strikes that Obama launched in his first two years. And he has made it more difficult to find out how many people have died in those strikes. Yet, as The Intercept reports, intrepid organizations continue to try to determine how often the administration conducts its aerial missions:

The Bureau of Investigative Journalism estimates that the U.S. carried out about 1,000 airstrikes in Afghanistan, Pakistan, Somalia, and Yemen in 2016 — that is, strikes by both drones and manned aircraft. So far in 2019, they believe that the U.S. has conducted 5,425 airstrikes, five times as many. In the month of September, the U.S. upped the pace to almost 40 airstrikes per day.

Then there are the wars that Trump is threatening to unleash. He has continually upped the ante in the conflict with Iran, most recently attempting to trigger “snapback” sanctions that would doom the nuclear deal once and for all. Allies and adversaries alike rejected the U.S. gambit. Meanwhile, even as he adds yet another round of sanctions against Chinese firms, Trump is pushing the U.S. military to confront China in its own backyard by increasing U2 overflights and “freedom of navigation” exercises in the South China Sea.

Lest you think the “war on terror” has ended in other parts of the world, the Africa Command continues to conduct operations across the continent. As Nick Turse, Sam Mednick, and Amanda Sperber report in the Mail & Guardian:

This accounts for a significant proportion of U.S. Special Operations forces’ global activity: more than 14 percent of U.S. commandos deployed overseas in 2019 were sent to Africa, the largest percentage of any region in the world except for the greater Middle East.

So, let’s put to rest (once again) the notion that Donald Trump is interested in restraining the military. In addition to pumping the Pentagon full of cash, he has ensured that it can conduct its actual war-fighting with as much flexibility and in as many places as possible.

Donald Trump has devoted his life to hedonism and the accumulation of personal power. His dismissal of military service is actually the least of his sins. He doesn’t believe in sacrificing anything for others. He entered politics purely as a vehicle for his own self-aggrandizement.

But the alternative to Trump is not the glorification of military service. War is stupid. Devoting one’s life to extinguishing the lives of others is not the answer the world needs at this time of pandemic and climate catastrophe.

Coming out of the Trump era (I hope), it’s difficult to imagine Americans making a collective sacrifice for anything when even the mandatory wearing of masks is seen by some as too much of an abridgement of individual liberty.

At the same time, the pandemic has brought mutual aid to the foreground. In the absence of coordinated responses from states, people have banded together to help their friends, neighbors, and communities. This is all impressive, but it’s a stopgap, not a strategy. The problems facing the world can’t just be solved by individuals volunteering their time and energy. Indeed, the notion of voluntary service, like enlisting to fight in World War II, is antiquated. Ultimately it is as fragile a concept as the voluntary compliance expected of the world’s nations in the Paris climate accord.

Imagine if traffic were organized on the basis of mutual aid and volunteerism. There would be a few well-run intersections. The rest would be chaos and accidents. Traffic on the ground, in the water, and up in the air requires states to establish the rules of the road and punish non-compliance. That is what is necessary, post-Trump. U.S. society desperately needs fair, equitable rules of the road. And scofflaws have to be punished.

The next administration needs to re-establish the rule of law in America, cracking down on vigilante violence, police violence, and executive branch violence. I can’t think of a better place to begin than by putting the Scofflaw-in-Chief on trial for all of his law-breaking. A long prison sentence would be a fitting cap to Trump’s career.

After a lifetime of selfishness, Trump should be sentenced to a very long period of community service. Wouldn’t you like to see the former president picking up trash by the side of the road for the rest of his life?