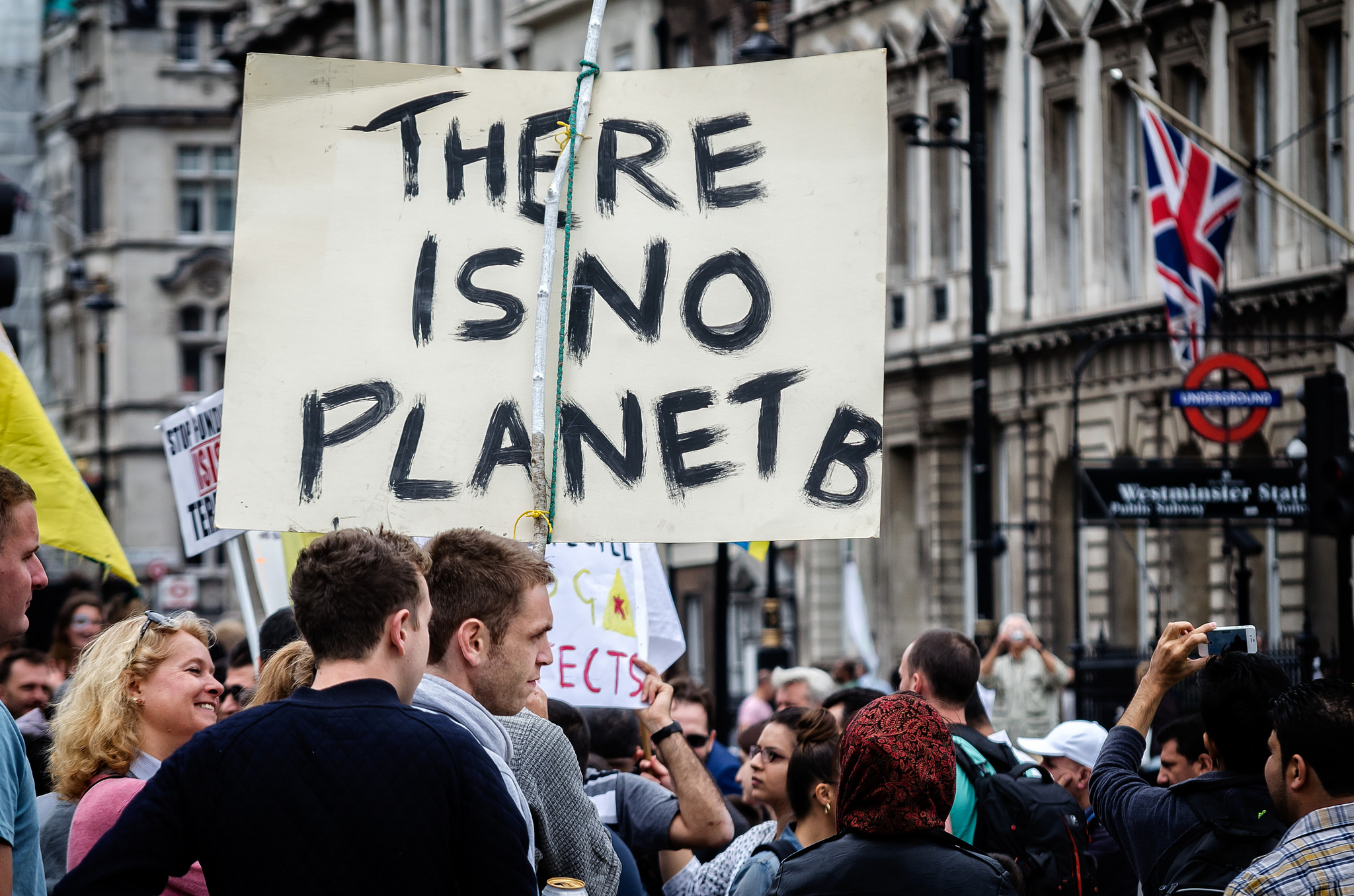 Trump Can’t Hold Back the Tide of Climate Action

Market forces, state and local action, and strong social movements could blunt the impacts of a denialist White House.
By Oscar Reyes | November 21, 2016

One of the sad ironies of Donald Trump’s victory is that climate change has risen up the political agenda only after the campaign, when both candidates and debate moderators largely ignored it. Trump’s denialism in the face of an urgent, planetary threat provides some potent imagery for how the devastation caused by his presidency might look.

Climate scientists have been quick to condemn Trump’s election as a “disaster,” and it’s not hard to see why.

The last three years have broken temperature records, with 2016 set to become the hottest yet. The UN Environment Program just warned that we need to do far more and far faster, while a new study of pledges from G20 countries found that even under Obama, the U.S. remained a long way off meeting its share of the global effort to tackle climate change. Yet we’ve just elected a man who promises to drill more oil, burn more coal, and scrap our national climate plan.

The Trump disaster could hit communities on the front line of climate justice struggles the hardest. Scenes like the militarized response to the struggle against the Dakota Access Pipeline could be the new normal under Trump if the expansion of fossil fuel infrastructure is matched with increasingly repressive policing.

It’s little wonder, then, that Trump’s election has left climate advocates reeling. But as mourning turns to anger and resistance, it’s worth recalling that there are significant limits on what Trump can do to hold back action on climate change.

The transition to cleaner energy will carry on regardless, as coal will remain uncompetitive. States and cities could ramp up their own climate efforts irrespective of the federal government. And international climate action has a momentum that’s not solely dependent on who occupies the White House.

Some of the loudest noises coming from the Trump camp suggest that his administration will withdraw from the Paris climate deal.

Since this process takes four years, it’s rumored that Trump is considering the shortcut of leaving the United Nations Framework Convention on Climate Change (UNFCCC), which George Bush Sr. signed in 1992 and the Senate ratified. That would set the U.S. apart from every other nation on earth (except the Vatican, which is strongly in favour of climate action all the same). There would be no clearer way to signal that Trump is making the U.S. a rogue state.

Unilateralism on this scale could throw up legal, political, and diplomatic hurdles that Trump’s team might not easily overcome. The Senate might demand a say on leaving the UNFCCC — and it’s not a given that a majority would favor the path of global isolation.

Alternatively, the Trump administration might choose to ignore Washington’s commitments without formally abandoning the international climate process. One of the first victims could be the global Green Climate Fund, which was set up to help developing countries with their climate transitions — and is now unlikely to see at least $2 billion of the $3 billion originally promised to it by the United States.

But the Trump wrecking ball won’t be able to destroy everything in its path. There are strong signs that U.S. isolation won’t wreck the Paris Agreement. Many other countries (including Saudi Arabia) have suggested that they will stick to their international climate commitments with or without the United States. There’s precedent here, too: When George W. Bush withdrew from the last global climate treaty, the Kyoto Protocol, the rest of the world continued with it anyway.

Faced with failed harvests, floods, droughts, and ever more extreme weather, most countries now realize that taking on climate change is in their own self-interest. Ultimately, the countries that lead the way in renewable energy, efficient buildings, and improved public transport (among other climate measures) will be best placed to cope with changes in the global economy.

If Trump follows the path of isolation, as he and his acolytes currently brag about doing, the big loser will be the United States itself. Other countries (notably, Canada and Mexico) might retaliate with border taxes for American goods if Trump welches on Washington’s climate commitments, and going it alone would considerably damage U.S. “soft power” — the ability to broker favorable international deals in other areas, ranging from defense to trade — as well as threatening jobs in clean energy, which already outnumber those in fossil fuel extraction.

Closer to home, the promised bonfire of environmental regulations could leave U.S. citizens choking on smog for years to come. With cities like Beijing regularly under a haze of toxic air, the Chinese know only too well that controlling climate change goes hand in hand with reducing pollution from power stations, factories, and cars. And while Trump has been peddling conspiracy theories about climate change being a Chinese hoax, the world’s most populous country has been shuttering coal plants and factories, alongside a host of other measures intended to help China transition to a greener economy.

Trump promises to take the U.S. in the opposite direction: scrapping the Clean Power Plan and gutting the Environmental Protection Agency (EPA), starting with the appointment of climate denier Myron Ebell to lead its transition team. But scrapping the Clean Power Plan could lead to a long legal battle, as would attempts to ditch long-standing regulations like fuel-efficiency standards for cars.

Even if Trump succeeds, almost half of the U.S. population lives in states that have already planned for its implementation. Those efforts may continue regardless of the federal government. For example, California legislators have already made clear they will not repeal a recently approved target of 40 percent emissions reductions by 2030. And from Boston to Boulder, a growing list of U.S. cities have pledged to cut 80 percent of their greenhouse gas emissions by 2050, and have developed plans to make that a reality.

Trump’s plans for a return to coal power won’t get far without large new subsidies or a sustained attack on the fracking industry. Otherwise the numbers simply don’t add up. Meanwhile the economics of renewable energy are getting better all the time. Residential solar power is expected to out-compete fossil fuels in over 40 states by 2020, while huge advances are also being made in energy storage and the development of electric vehicles.

The Seeds of a New Economy

While advances in technology and the changing economics of energy could very well dampen the impacts of the climate skepticism emanating from the White House, they obviously won’t come anywhere close to what the U.S. needs to do to actually pull its weight on climate change.

Climate justice activists, on the other hand, are already digging in for a long fight. Thousands of activists joined hundreds of protests around the country in support of the Standing Rock Sioux and other Native American activists opposed to the Dakota Access Pipeline, while international climate justice groups have promised to stand with their U.S. allies in resisting the expansion of fossil fuel infrastructure.

Alongside resistance, efforts to build a new economy could, and should, continue from the ground up. The energy transition requires new forms of ownership and a more collaborative economy. That may sound like a tall ask in such a hostile political climate, but there is historic evidence that the Scandinavian model of cooperative ownership grew in response to political polarization and the repression of organized labor, while deeper changes in the way markets work could spur the rise of collaborative production.

In short, while Trump’s election is a disaster for the climate, there remains plenty of fertile ground for an energy transition, and many spaces to sow the seeds of a new economy.

Oscar Reyes is an associate fellow at the Institute for Policy Studies.