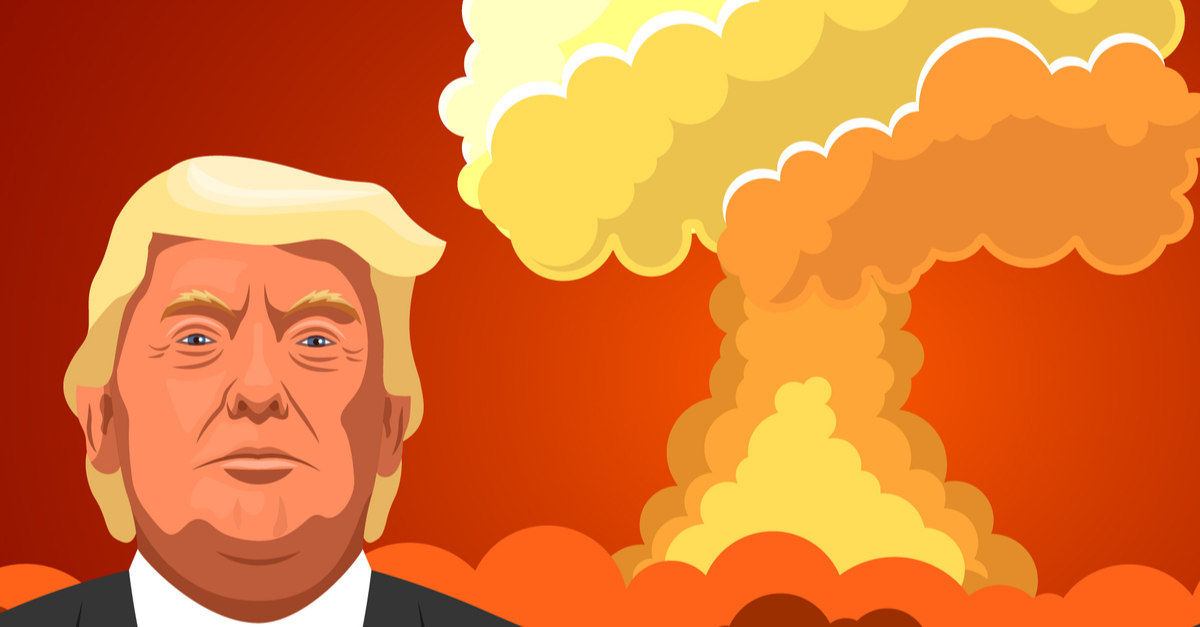 Trump is doing whatever he can to make it impossible for his successor to resolve some of the world’s most intractable problems.
By John Feffer | September 16, 2020

It is a recent tradition among occupants of the White House, as they head out of office, to play a few practical jokes on their successors. The Clinton administration jesters, for instance, removed all the Ws from White House keyboards before handing over the keys to George W. Bush’s transition team. The Obama administration left behind books authored by Barack Obama for Trump’s incoming press team.

Donald Trump has no sense of humor. His “gift” to the next administration is dead serious. With his recent foreign policy moves, the president is trying to change the facts on the ground so that whoever follows in his footsteps will have a more difficult time restoring the previous status quo.

Forget about pranks. This is a big middle-finger salute to the foreign policy establishment and the world at large.

Of course, Trump is not preparing to leave office, regardless of the results of the November election. But in his policies in the Middle East and East Asia, the president is attempting to change the very rules of the game just in case he’s not around next year to personally make more mischief. The man is not going to win a Nobel Prize for his efforts — despite the recent nominations coming from a pair of right-wing Scandinavians — but he’ll do whatever he can to achieve the next best thing: putting the Trump brand on geopolitics.

It cost about $5,000 to replace all those W-less typewriters. The bill for all the damage Trump is doing to international affairs in his attempt to make his Israel, Iran, and China policies irreversible will be much, much higher.

Israel Up, Palestine Down

For several years, the Trump administration promised a grand plan that would resolve the Israel-Palestine stand-off. According to this “deal of the century,” Palestinians would accept some economic development funds, mostly from Gulf states, in exchange for giving up their aspirations for an authentic state.

The hoops Palestinians would have to jump through to get even such a shrunken and impotent state — effectively giving up Jerusalem, relinquishing the right to join international organizations without Israel’s permission — are such obvious deal-breakers that Jared Kushner and company must have known from the start that their grand plan was not politically viable.

But finding a workable solution to the Israel-Palestine conflict was not the purpose of the plan. It was all an elaborate shell game.

While the administration dangled its proposal in front of world leaders and international media, it was working with Israel to create “new realities.” Trump withdrew the United States from the UN Human Rights Council for its “chronic bias against Israel.” The administration closed the PLO’s office in Washington, D.C. and eliminated U.S. funding for the UN agency that supports Palestinian refugees. And in perhaps the most consequent move, Trump broke a global convention by moving the U.S. embassy from Tel Aviv to Jerusalem. Until recently, only one country, Guatemala, had followed suit.

But then came a flurry of diplomatic activity this fall as both the United Arab Emirates and Bahrain extended diplomatic recognition to Israel. The Trump administration also pushed Serbia and Kosovo, as part of a new economic deal, to include clauses about Israel: Serbia will move its embassy to Jerusalem and Kosovo will establish one there after establishing diplomatic relations with Israel.

Astonishingly, the Trump administration has promoted this diplomatic activity as restraining Israel. In May, Netanyahu announced that he was moving forward with absorbing sections of the West Bank that already featured large Israeli settlements. He subsequently stepped back from that announcement to conclude the new diplomatic deals with the Gulf States. But it was only reculer pour mieux sauter, as the French say: stepping back to better leap forward. Netanyahu had no intention of taking annexation off the table.

“There is no change to my plan to extend sovereignty, our sovereignty in Judea and Samaria, in full coordination with the United States,” Netanyahu said in mid-August. Some further to the right of Netanyahu — alas, they do exist — want to annex the entire West Bank. But that’s de jure. As writer Peter Beinart points out, Israel has been annexing the West Bank settlement by settlement for some time.

Where does this leave Palestinians? Up a creek without a state. The Trump administration has used its much-vaunted “deal of the century” to make any future deal well-nigh impossible. In collaboration with Netanyahu, Trump has strangled the two-state solution in favor of a single Israeli state with a permanent Palestinian underclass.

The cost to Palestinians: incalculable.

Strengthening Israel was a major part of Trump’s maneuverings in the Middle East. A second goal was to boost arms sales to Gulf countries, which will only accelerate the arms race in the region. The third ambition has been to weaken Iran. Toward that end, Israel, Bahrain, and the UAE now form — along with Saudi Arabia — a more unified anti-Iran bloc.

But the Trump crowd has never been content to contain Iran. It wants nothing less than regime change.

From the get-go, the Trump administration nixed the Iran nuclear deal, tightened sanctions against the country, and put pressure on all other countries not to engage Iran economically. In January, it assassinated a leading Iranian figure, Qassem Soleimani of the Iranian Revolutionary Guard Corps. And this summer it tried, unsuccessfully, to trigger “snap-back” sanctions against Iran that would kill the nuclear deal once and for all.

Even as the Trump administration was celebrating the diplomatic deal between the UAE and Israel, it was going after several UAE firms for brokering deals with Iran. Trump recently castigated the Iranian government for going through with the execution of wrestler Navid Afkari for allegedly killing a security guard during a 2018 demonstration.

And U.S. intelligence agencies have just leaked a rather outlandish suggestion that Iran has been thinking about assassinating the U.S. ambassador to South Africa. According to Politico, “News of the plot comes as Iran continues to seek ways to retaliate for President Donald Trump’s decision to kill a powerful Iranian general earlier this year, the officials said. If carried out, it could dramatically ratchet up already serious tensions between the U.S. and Iran and create enormous pressure on Trump to strike back — possibly in the middle of a tense election season.”

Sure, Iran might be itching for revenge. But why risk war with a president who might just be voted out of office in a couple months and replaced with someone who favors returning to some level of cooperation? And why would the unnamed U.S. government officials leak the information right now? Is it a way to discourage Iran from making such a move?

Or perhaps it’s to provoke one side or the other to take the fight to the next level — and take off the table any future effort to repair the breach between the two countries?

At a press conference earlier this month, Trump laid out his vision of U.S. relations with China.

Gone were the confident predictions of beautiful new trade deals with Beijing. After all, Trump had canceled trade negotiations last month, largely because the Phase 1 agreement hasn’t produced the kind of results the president had predicted (in terms of Chinese purchases of U.S. goods).

Nor did Trump talk about what a good idea it was for China to build “re-education camps” for Uyghurs in Xinjiang (he reserves such frank conversation for tete-a-tetes with Xi Jinping, according to John Bolton).

Rather, Trump talked about severing the economic relationship between the two countries. “Under my administration, we will make America into the manufacturing superpower of the world, and we’ll end our reliance on China once and for all,” he said. “Whether it’s decoupling or putting in massive tariffs like I’ve been doing already, we’re going to end our reliance on China because we can’t rely on China.”

As with virtually all things, Trump doesn’t know what he’s talking about. China has been largely unaffected by all of Trump’s threats and posturing. As economist Nicholas Lardy explains, “for all the fireworks over tariffs and investment restrictions, China’s integration into global financial markets continues apace. Indeed, that integration appears on most metrics to have accelerated over the past year. And U.S.-based financial institutions are actively participating in this process, making financial decoupling between the United States and China increasingly unlikely.”

In fact, decoupling is just another way of saying “self-inflicted wound.” On the non-financial side of the ledger, the United States has already paid a steep price for its trade war with China, which is only a small part of what decoupling would ultimately cost. Before the pandemic hit, the United States was already losing 300,000 jobs and $40 billion in lost exports annually. That’s like a Category 3 hurricane. A full decoupling would tear through the U.S. economy like a Category 6 storm.

American presidents want to leave behind a geopolitical legacy. Bill Clinton was proud of both the Dayton agreement and the Oslo Accords. George W. Bush touted his response to the September 11 attacks. Barack Obama could point to the Iran nuclear deal and the détente with Cuba.

Donald Trump, like the aforementioned twisters, has left destruction in his path. He tore up agreements, initiated trade wars, pulled out of international organizations, and escalated America’s air wars.

But perhaps his most pernicious legacy is his scorched-earth policy. Like armies in retreat that destroy the fields and the livestock to rob their advancing adversaries of food sources, Trump is doing whatever he can to make it impossible for his successor to resolve some of the world’s most intractable problems.

His diplomatic “achievements” in the Middle East are designed to disempower and further disenfranchise Palestinians. His aggressive policy toward China is designed to disrupt an economic relationship that sustains millions of U.S. farmers and manufacturers. His bellicose approach to Iran is designed not only to destroy the current nuclear accord but make future ones impossible as well.

If he wins a second term, Trump will bring his scorched-earth doctrine to every corner of the globe. What he is doing to Iran, China, and the Palestinians, he will do to the whole planet. The nearly 200,000 pandemic deaths and the wildfires destroying the West Coast are just the beginning. Donald Trump can’t wait to take his brand of American carnage to the next level.