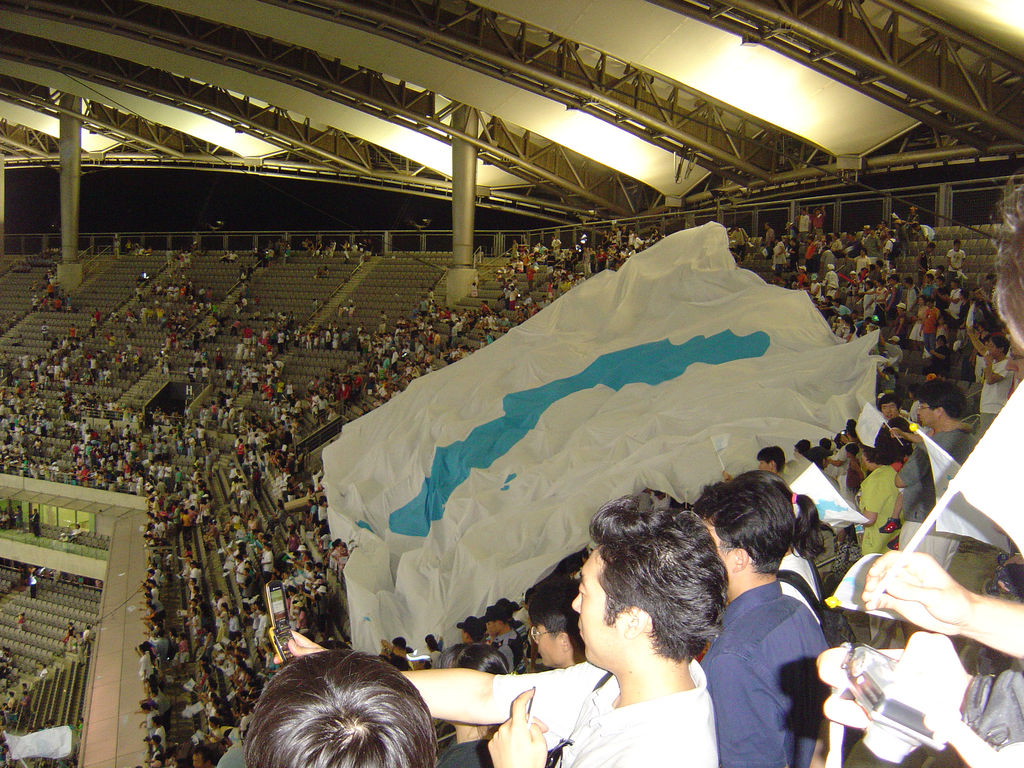 While the Two Koreas Talk, Trump Is Throwing Shade

As South Korean and North Korean athletes walk together during the opening ceremony of the Winter Olympics in Pyeongchang, South Korea, carrying a One Korea flag, the Trump administration is actively working to undermine the good vibes flowing across the DMZ.

Last month, North Korean and South Korean leaders met for two high-level meetings to discuss how to defuse tensions that reached a boiling point last year. Relations between the two Koreas had frozen after a decade of hardline rule in South Korea, but the dangerous threat of a new Korean War prompted both Korean governments to seize the hopeful opportunity presented by the Olympics. This was soon followed by the United States agreeing to South Korea’s request to honor the Olympics Truce by postponing the joint annual spring war drills.

Many hoped that 2018 signaled a turn towards a diplomatic resolution to the Korean conflict.

Instead, last week, news emerged that the Trump administration had axed the nomination of Victor Cha for the U.S. ambassador post in South Korea — for allegedly opposing White House plans for a “bloody nose” strike on the North.

By now it’s clear that serious military plans are being drawn up to strike North Korea before its missiles can carry a nuclear warhead capable of reaching the mainland.

Secretary of Defense James Mattis has said that the U.S. approach to North Korea is “firmly in the diplomatic lane,” but there’s no sign of genuine diplomacy that would invite dialogue. Instead, the Trump administration’s “maximum pressure” campaign to further isolate North Korea aims to foment regime collapse by imposing ever more sanctions and forcing other countries to cut off relations with Pyongyang.

As if there were any doubt, Vice President Mike Pence announced in Japan on the eve of the Olympics that the United States would be unveiling the “toughest and most aggressive round of economic sanctions on North Korea ever” — and that this policy of strangulation would be in place until its “complete, verifiable, and irreversible denuclearization.”

Sanctions Against the Most Vulnerable

The North Korean economy has been built over the last 65 years to withstand the U.S. economic blockade in place since the Korean War. But the new round of sanctions, including those imposed by the UN Security Council, target major sectors of the North Korean economy that have nothing to do with nuclear weapons or missiles, or even luxury goods for the Kim regime.

According to political economist and University of Sussex Professor Kevin Gray, measures contained in the UN resolution that passed last September belie its claims that they’re “not intended to have adverse humanitarian consequences for the civilian population.” Instead of succeeding in forcing North Korea to give up its nuclear weapons, these U.S.-led sanctions have been hitting North Korean civilians, especially the most vulnerable.

According to a January 2018 UNICEF report, up to 60,000 North Korean children could starve as a result of the sanctions.

A report by the Nautilus Institute from the same month spelled out what the sanctions could mean for civilians and the North Korean environment more broadly:

“The immediate primary impacts of responses to oil and oil products cut-offs will be on welfare; people will be forced to walk or not move at all, and to push buses instead of riding in them. There will be less light in households due to less kerosene, and less on-site power generation. There will be more deforestation to produce biomass and charcoal used in gasifiers to run trucks, leading to more erosion, floods, less food crops, and more famine. There will be less diesel fuel to pump water to irrigate rice paddies, to process crops into foodstuffs, to transport food and other household necessities, and to transport agricultural products to markets before they spoil.”

According to Dr. Kee Park, a neuroscientist at Harvard Medical School, sanctions are severely curtailing critical medicine and medical equipment from entering North Korea. “Life-saving drugs such as chemotherapy drugs and anti-TB drugs are being held up by logistics companies,” Park wrote to me by email, because “donors are reluctant to supply the drugs out of fear of being non-compliant.” He added that there are shipping containers full of wheelchairs can’t be delivered and pointed to Pyongsu Pharmaceutical Company, a joint venture between the North and a private Swiss company, which “may stop operations out of fear of sanctions compliance.”

Meanwhile, governments such as the United Kingdom, New Zealand, and Malaysia are cutting off official humanitarian aid to North Korea. At the Vancouver Summit last month of UN Command nations, South Korean Foreign Minister Kang Kyung-hwa discussed sending $8 million in humanitarian aid to North Korea through the World Food Program, but this was intensely opposed by the United States, Japan, and the United Kingdom, whose foreign ministers argued that it would undermine the Trump administration-led Maximum Pressure campaign.

A “Moral” Case for War

As the two Koreas work things out, from reviving the military hotline to coordinating a joint women’s hockey team, the Trump administration’s goal for the Olympics is to further provoke North Korea.

Pence’s invited guest at the Olympics, for instance, is the father of Otto Warmbier, the American student who was detained in North Korea and later died after returning home in a coma. And in Tokyo, Pence called North Korea the “most tyrannical and oppressive regime on the planet.” Although Secretary of State Rex Tillerson has hinted that Pence would be open to meeting the North Korean delegation — which includes Kim Jong Un’s sister, Kim Yo-Jong — North Korea has responded: “This is the height of sarcasm. We have never begged for dialogue with the U.S.”

Clearly, the Trump administration is taking a page from the Bush administration — which used the very real human rights abuses of the Saddam Hussein regime to justify a disastrous military invasion of Iraq, which created an even more dire human rights crisis.

The writing was on the wall during Trump’s State of the Union speech, where the president sought to build the moral case for a U.S. preventive war to “liberate” North Koreans. It was highly reminiscent of the 2002 “Axis of Evil” speech, where George W. Bush sold to Americans the highly unpopular and massively expensive U.S. war on Iraq. In selling a pre-emptive strike against the “depraved” North Korean regime, Trump tried to conflate the liberation of North Koreans with preserving American’s freedom.

One does not get to improved human rights in North Korea by bombing that country to bits. Experts estimate that launching a “preventive” war could instantly kill over 300,000 people in the opening days of a conventional conflict, endangering millions of South Koreans and 230,000 Americans now living in South Korea. It would undoubtedly trigger retaliation from North Korea, threatening a nuclear war that would impact 25 million people or more.

Yet the bright spot is that the two Koreas are talking.

Although the two Koreas have walked together twice before carrying the blue Korean Peninsula flag at the Olympics, this time it’s on Korean soil. We cannot underestimate the power of seeing Koreans tragically divided and separated by Cold War powers join together.

Meanwhile, the wedge that’s being driven between the United States and South Korea isn’t by Kim but by the Trump administration’s recklessness, which threatens to totally destroy not just North Korea, but the entire Korean Peninsula.

As long as the two Koreas are talking, the international community should support the remarkably hopeful and positive peace process underway, not throw shade like the Trump administration is doing. World leaders should follow UN Secretary-General Antonio Guterres, who at the official Olympics lunch said:

“The Olympic Games are very important, but the true reason of my visit is the strong wish to express my total solidarity with the Korean people in this moment of tension and opportunity. … The success of your engagements in inter-Korean dialogue and the success of international efforts in order to create a peaceful, denuclearized Peninsula that will be, I hope, the symbol of the peace we would like to see all over the world.”

Christine Ahn is the founder and international coordinator of Women Cross DMZ, a movement of women mobilizing for peace on the Korean Peninsula.