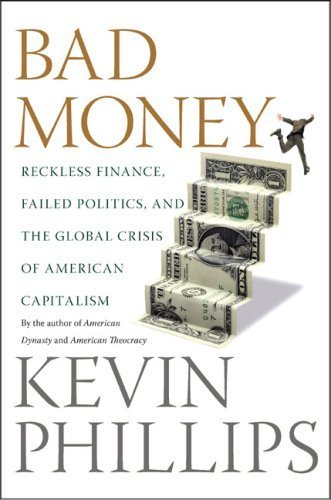 When the Betting Goes Bad 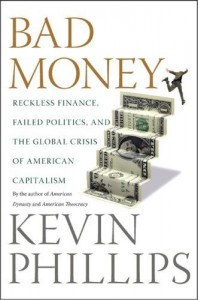 Rarely in politics do we witness such a rapid transformation as Senator John McCain’s recognition of America’s current financial crisis. Until the middle of September 2008 — throughout myriad home foreclosures, personal bankruptcies, and even the failure of hallowed Wall Street firms — the candidate stuck with his mantra that “the fundamentals of the economy are strong.” The true believers who gathered with him in Minnesota for the Republican National Convention gave this sentiment a hearty cheer.

Yet the political debate is now revolving around the need for a nearly one-trillion-dollar bailout for the country’s financial institutions. Even McCain, who is suddenly railing against Wall Street greed, recognizes the need for a different message.

Kevin Phillips, author of Bad Money: Reckless Finance, Failed Politics, and the Crisis of American Capitalism, is one person who has exhibited a vastly superior sense of timing in his analysis of the U.S. economy. Phillips said that his book, released in early 2008 (before the worst of the financial crisis had taken shape), is “about the insecurity of America’s future as the leading world economic power, given a debt-gorged and negligent financial sector, and the vulnerability caused by the nation’s expensive dependence on imported oil.”

When McCain was still taking comfort in the idea that America is “still the most innovative, the most productive, the greatest exporter, the greatest importer,” Phillips was addressing a host of pressing challenges. “U.S. housing prices, credit-bubble risk, the instability of so many financial innovations never crisis-tested, the ever-more-apparent inadequacy of global oil production, the related vulnerability of the dollar, and, behind it all, the false assurance of American ‘imperial’ hubris,” he pointed out, had already combined to put the country in serious jeopardy.

Those who have perused some of Phillips’ previous works may remember his unorthodox political past. Phillips was a strategist for Richard Nixon and a longtime Beltway operative. He was famous for helping the Republicans craft their “Southern strategy” of the 1970s and ’80s, through which the right gained power by winning over formerly Democratic states in Dixieland. But over the past two decades Phillips has emerged as an outspoken critic of the GOP, both its religious conservative and market fundamentalist wings. He brings to his writing a keen sense of the political implications of economic trends — something often missing from the writings of economists themselves. As the author notes in his new work, he has been producing books at a steady two-year clip, timed to coincide with successive election cycles. The most recent of these titles were 2004’s American Dynasty, which railed against the House of Bush, and 2006’s American Theocracy, which raised earlier concerns about U.S. debt and oil dependency while also warning against the religious right.

Conservative evangelicals received their comeuppance in the 2006 elections, Phillips believes, but U.S. economic difficulties have only gotten worse. Deploying an old joke about the economics profession, he writes, “Economists, political scientists, and energy experts, usually eager to make forecasts, have arguably predicted nine of the last five recessions.” Nevertheless, the problems that emerged in the wake of the subprime meltdown have the makings of a grave downturn.

In Bad Money, Phillips provides a well-timed investigation into the increasingly exotic financial securities that rose to prominence in past years. He describes how such instruments as mortgage-backed securities and collateralized debt obligations infected the financial system with risk as they were endlessly leveraged in what resembled a modern-day pyramid scheme.

Phillips is decidedly alarmist, and his visions of doom might grow tiresome if he didn’t go beyond recent headlines and root these financial problems in a deeper, two-decade trend. He writes that “the Eighties can be identified as the launching pad of a decisive financial sector takeover of the U.S. economy, consummated by turbocharged, relentless expansion of financial debt and the…extension of mortgage credit.” These two factors created an economy that was dangerously reliant on speculation rather than on real economic production. Although the trend of favoring finance and removing regulations began in the Reagan years, neither major party has been willing to do much about it because both rely on the deep pockets of Wall Street bankers and Connecticut hedge-fund managers for campaign contributions.

Compounding these problems, Phillips contends, are the perils of petro-dependency. He believes that peak oil is real and that its consequences are dire. Rising demand for fuel and skyrocketing oil prices, he argues, expose the weakness of the oil-linked U.S. dollar, deepen the economic woes brought on by speculative finance, and threaten to embroil the country in increasingly messy geopolitical confrontations.

Phillips has a habit of putting very recently passed history firmly in the past tense. Indeed, his book is largely a financial and political history of 2007, a bygone but memorable year that even the non-historians among us may recall in some detail. The book is timely, for sure. But Phillips’ quick second draft of history is probably lasting enough to endure only until the next two-year election cycle. Already, for example, the call for American energy independence and green development has morphed from an outsider’s jeremiad into a campaign promise that appears, however disingenuously, in Republican TV ads as well as Democratic ones. Already, as we have seen, even our politicians most inclined toward deregulation now profess concern about securities firms treating the economy like a casino. Phillips could no doubt respond to these and other changes in the rapidly shifting geopolitical scene without abandoning his core theses. Still, one doubts whether his preferred writing style will ever allow him enough historical distance to avoid the newest twists of daily politics.

That said, Bad Money makes a worthwhile contribution to today’s debate. No newspaper reporter is afforded enough column inches to provide any decent context for the woes our economy currently faces. And few longer-form writers are willing to take on the range of phenomena that Phillips examines, draw connections between them, and explain their wider significance. The author does a fine service by popularizing critiques of the financialization of the economy, which have long been popular with political economists further to the left than he but that will be new to lay-readers.

Trying to muster a positive note upon which to end Bad Money, Phillips suggests that after some inevitable decline the United States is better positioned than the Spanish, Dutch, and British empires of yore to reemerge, chastened but intact, with a more modest and grounded capitalist economy. This post-imperial America would be less attached to oil, militarism, and financial gambling, and more based in good old manufacturing.

Sketched in just a few sentences, this economic prescription seems more sweetly nostalgic than visionary. For if his dire forecasts prove true, we’ll need a much more imaginative restructuring of global economic life than either the diminished ex-imperial powers of Europe or the earlier generation’s captains of industry could dream to offer.

Mark Engler, a Foreign Policy In Focus senior analyst, is the author of How to Rule the World: The Coming Battle Over the Global Economy (Nation Books, 2008). Mark can be reached via his website http://www.DemocracyUprising.com
.